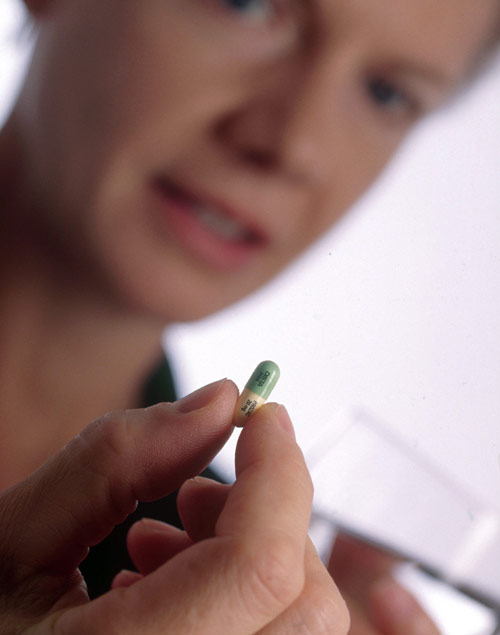 Double duty: The antidepressant Prozac has no effect on children with autism, but seems to improve repetitive behaviors in adults with the disorder.

Fluoxetine, an antidepressant marketed as Prozac, may alleviate repetitive behaviors in adults with autism, according to a study published 2 December in the American Journal of Psychiatry1.

The results are in contrast to several studies showing that antidepressants, including fluoxetine, have no effect on repetitive behaviors in children with the disorder.

Repetitive behaviors and restricted interests, a core feature of autism, share some overlap with obsessive-compulsive disorder, which is often treated with selective serotonin reuptake inhibitors, or SSRIs, such as fluoxetine. Because of this, a number of studies have investigated whether SSRIs could also help individuals with autism.

However, the only study to look at the effects of fluoxetine on adults with autism, according to the researchers, showed improvements in repetitive behaviors3.

The neurotransmitter serotonin, which regulates mood, appetite and sleep, has been linked to autism. Children with the disorder have been shown to have high levels of serotonin in the blood and lower-than-normal brain activity of a protein that regulates serotonin levels.

In the new study, researchers looked at the effect of fluoxetine, which has broader and longer-lasting effects than does citalopram, in 37 adults with autism. Of these, 22 were treated with fluoxetine for 12 weeks and 15 received a placebo. Neither the participants nor the researchers knew who was receiving which dose.

The researchers used the Yale-Brown Obsessive-Compulsive Scale and the Clinical Global Impression (CGI) scale to assess repetitive behaviors in participants. They also used the latter scale to measure overall functioning.

The side effects of the medication were mild, the study found.

The discrepancy with previous findings may be due to differences in the effects of fluoxetine compared with citalopram and in the way it functions in adults compared with children, the researchers say. They recommend further research into the effects of the drug on different forms of repetitive behavior, such as obsessions, rituals and routines, and stereotyped movements.