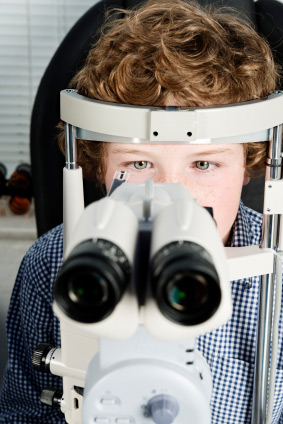 Roving eye: More than 40 percent of children with autism visiting an eye clinic in Baltimore have strabismus, or crossed eyes.

Many children with autism have specific eye problems, such as crossed eyes or a lazy eye, according to a study published in the June issue of Strabismus1.

Vision is a controversial topic in autism research. Some studies claim that people with the disorder have superior visual acuity, or sharpness, whereas others find no differences in vision. Still other studies have reported visual deficits in mouse models of autism-related syndromes.

Most of this research has focused on visual sharpness, however, and little is known about the frequency of other types of eye problems in autism.

In the new study, researchers reviewed the medical charts of children with autism who sought care from ophthalmologists at the Greater Baltimore Medical Center between 2007 and 2011.

Of the 44 children, 18 have strabismus, or crossed eyes, with 4 requiring surgery. Five children have amblyopia, also known as a lazy eye, and three have anisometropia, a condition in which the two eyes have different acuities.

The work is limited in that the researchers did not use a representative sample of children with autism. Still, the prevalence of these eye problems in autism appears to be several times higher than that of the general population, they note.

The findings bolster those from a study published last year. In that study, a team from Saint Louis University reported that 40 percent of children with autism and related disorders have some kind of eye problem2. The researchers recommended comprehensive eye exams for all children with the disorder.