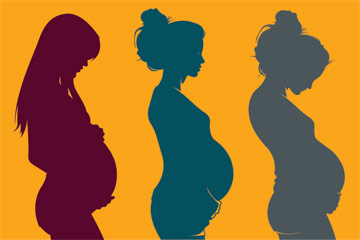 Unbiased enrollment: The National Institutes of Health, which administers the National Children’s Study, has decided that door-to-door recruitment of pregnant women is too expensive.

Last year, the National Institutes of Health (NIH) announced that the National Children’s Study (NCS), a decade-old effort to track children’s health from birth to age 21, would undergo radical restructuring to cut costs.

The study is of particular interest to autism researchers because of its large scale — it aims to track 100,000 pregnant women and monitor early environmental exposures and gene-environment interactions in the women and their children. With the current autism prevalence of 1 in 88 children, more than 1,000 children born to the women in the study would be likely to develop autism.

After ten years of preliminary work, the bulk of the recruiting will begin this year, and one the biggest changes to the effort is a shift in how pregnant women will be enrolled. The streamlined version of the project has left scientists and autism advocacy groups concerned that the NCS will not provide the answers they had hoped.

“We need a large, prospective, population-based study to answer questions that require lots of variation in exposure and outcome,” says Rebecca J. Schmidt, assistant professor of public health sciences at the University of California, Davis. “So many of us researchers were optimistic that this was the study we need to answer the questions our individual studies cannot.”

Of particular concern to autism researchers is the NIH’s decision to forgo door-to-door recruitment and to recruit pregnant women from existing health databases instead. This means that the study will focus on those who have health insurance, potentially neglecting minority and low-income groups. The decision led two advisors to the study to resign in March 2012.

“Using existing healthcare databases no longer gives you a picture of the population at large,” says Schmidt. “While this might be easier logistically, the cost to what can be generalized from findings is high.”

One of the strengths of the study was its goal of collecting a wide range of data on exposures among the general population and assessing how those exposures affect autism prevalence and severity in a large sample.

Determining environmental impacts on autism rates has proven difficult for researchers because it’s challenging to disentangle chemical exposures and other environmental factors from social factors, such as growing awareness of the disorder. For example, high income and proximity to others with autism have been shown to lead to a greater likelihood of diagnosis.

NCS staff plan to collect and bank genetic samples from the children and their parents in order to better identify gene-environment interactions. The researchers aim to share data and meet each quarter with other such large studies under way in France, Germany, Japan and China. Each of those studies is enrolling up to 100,000 children, says Steven Hirschfeld, who became director of the NCS in February.

In the U.S., the Early Autism Risk Longitudinal Investigation, or EARLI, is hoping to recruit 1,200 pregnant women (233 have been enrolled thus far) who already have at least one child with autism. The children born to these women are about 20 times more likely to develop autism than the general population.

“You might be more likely to see environmental factors when you look against the background of families with this enriched genetic susceptibility,” says Craig J. Newschaffer, lead investigator of EARLI and director of the A.J. Drexel Autism Institute at Drexel University in Philadelphia.

Through a partnership with Johns Hopkins University in Baltimore, Newschaffer is also trying to develop simpler and quicker tools for screening and diagnosing autism, allowing non-expert NCS staff to confirm autism diagnoses.

The researchers plan to validate the new tests by comparing them with the Autism Diagnostic Observation Schedule and the Autism Diagnostic Interview-Revised, which are the gold standard tests for autism diagnosis. “This would be information that the NCS could then use to roll into their protocol,” says Newschaffer.

In the meantime, facing increasing scrutiny from Congress over costs, which have doubled from their original estimates, the NIH has opted to consolidate resources and data by having 4 regional centers rather than the 40 university centers it began with.

More than 60 percent of the universities “engaged subcontractors whom we can’t communicate legally with — that’s not a sustainable business model,” Hirschfield says. Having different contractors also generates a lot of variability in the consistency and quality of the information, he adds.

But others say the change of approach indicates deeper problems with the NCS.

“If administrative costs have been not efficiently used in the study so far, it seems as though this is a problem of overall study leadership,” Schmidt says. “If anything, the university-led centers should have more input, given these groups have extensive knowledge and experience leading these types of studies.”

Despite the changes, researchers at the NCS say they still hope to recruit 100,000 children.

Newschaffer says both EARLI and the NCS are necessary, but neither is easy. “Unfortunately, it’s proving hard to do either of them,” Newschaffer says. “They’re expensive and people get impatient.”