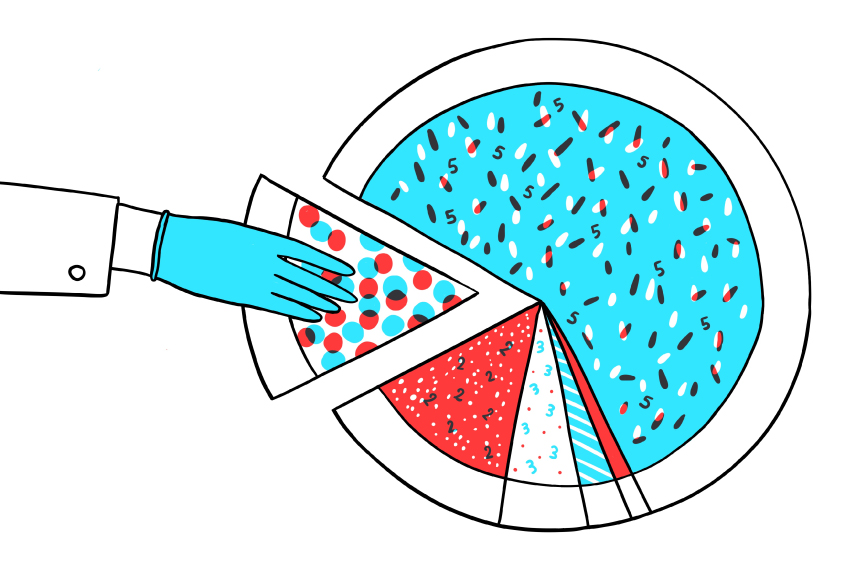 Welcome to this month’s edition of the By the Numbers Newsletter! At Spectrum, we do our best to summarize the latest autism research findings. And sometimes, the best summary comes in the form of a chart or map. In this newsletter, we boil down interesting new research that is conveyed most succinctly by way of data visualizations.

Extended antipsychotic use among autistic preschoolers

In 2012, 316 children under the age of 6 from low-income households in Kentucky began taking antipsychotic medications. Over the next five years, nearly two-thirds of these preschoolers — 65 percent — wound up taking three or more types of psychotropic medications, including antipsychotics, amphetamine-based stimulants and antidepressants, sometimes simultaneously. Almost one-third, or 31 percent, took four or more psychotropic medication classes. And those with autism or in foster care tended to take the medications for longer than other children.

“I think that what is most concerning is the extent and duration of polypharmacy that we found in the group. About 31 percent of these children received four or more medication classes over the course of the study period, and many children remain on the medications for a substantial period of time,” said study lead W. David Lohr, professor of child and adolescent psychiatry and psychology at the University of Louisville in Kentucky, during a Q&A with Spectrum.

“I’m concerned that we don’t really understand the risks these medications pose compared with the benefits they provide,” Lohr says. The data are based on Kentucky state Medicaid claims from 2012 to 2017. The findings appeared in Psychiatric Services in September.

Autistic people vaccinated against COVID-19 at high rates in Israel

Vaccination rates were significantly higher among autistic people aged 16 to 40, compared with non-autistic people in that age range. Autistic men were more likely than autistic women to get a shot, as were people of higher socioeconomic status. The findings appeared in Research in Autism Spectrum Disorders in September.

The findings in Israel contrast with U.S. data gathered by researchers who randomly called hundreds of thousands of people in the United States between 30 May and 26 June and asked about disability and vaccination status. In that study — the National Immunization Survey Adult COVID Module, published in October — 5,345 adults with any disability were less likely to report having gotten at least one vaccine dose than were adults without a disability, but they were also more likely to say that they will definitely get vaccinated in the future.

Children from low-income families are diagnosed with autism about eight months later than their wealthier peers, regardless of how many ‘well-child’ visits they attend, according to a new study.

The analysis reviewed insurance claims for 253 autistic children born in Virginia in 2011. Those on Medicaid, government-funded health insurance for low-income families in the U.S., were diagnosed with autism at 48.5 months of age, on average, compared with 40.7 months for those with private insurance. The findings appeared in The Journal of Pediatrics in September.

Nearly one in five of the children in the study did not attend a single well-child visit between ages 1 and 5. Children on Medicaid are less likely to attend checkups than are those with private insurance.

And for children who are still undiagnosed at their 3-year-old visit, “those who have Medicaid insurance are 85 percent less likely to be diagnosed” at that checkup than are privately insured children, says study leader Pamela DeGuzman, associate professor of nursing at the University of Virginia in Charlottesville.

Disparities in time to diagnosis for children on Medicaid could be tied to their family’s financial circumstances. People on Medicaid “are a lot less likely to have paid time off. They have less flexible schedules. Sometimes people are working more than one job,” DeGuzman says. All of those factors make it harder to get a child to the doctor.

3.67: The male-to-female autism ratio among children in Norway. The ratio drops to 2.57 in adults, according to data that draw on more than 1.7 million adults and about 800,000 children born in Norway between 1967 and 2011. The results were published in Acta Psychiatrica Scandinavica in September.

2.5: The increased proportion of children with autism in the Republic of Korea who died prematurely, compared with a child without the condition. The result, published in Yonsei Medical Journal in September, used data from all children born in the country between 2007 and 2014 (nearly 3.6 million), about 33,000 of whom had an autism diagnosis. The association between autism and childhood mortality was higher among girls than boys. The study looked only at hazard ratios, which can change over time; a high value at one point in life might not mean that there are long-term differences.

80.3: The percentage of white parents in a U.S. cohort who suspected their child has autism prior to diagnosis. By contrast, only 67.3 percent of Black, 61.3 percent of Hispanic and 40.8 percent of Asian parents held similar suspicions. The white parents’ children tended to have less severe traits, according to clinician evaluations, than the other children did. The results were published in Autism in September.

3.07: The increased odds that someone with an anorectal malformation has autism, compared with someone without such a malformation. The result, published in Acta Paediatrica in September, included data from 515 people in Sweden and 2,560 matched controls. Anorectal malformations were also associated with three-times higher odds of having attention deficit hyperactivity disorder.

Map spotlight: After an autism diagnosis, many children benefit from behavioral, physical or speech therapies. But accessing those services can be challenging and time-consuming. A new map from researchers at the Georgia Institute of Technology in Atlanta lists providers in that state. Users can filter the list by provider hours, payment options and more. The same team previously made an interactive data visualization of the ‘autism cliff,’ highlighting how autism service access falls off after 18 years of age.