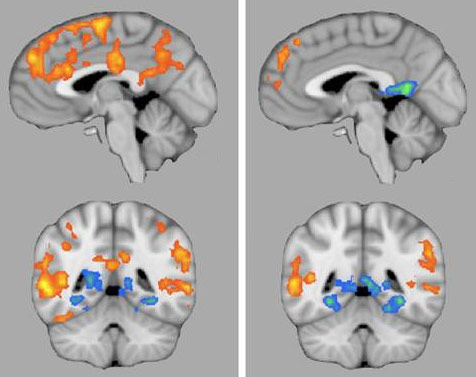 Oxytocin, the so-called trust hormone, is a hot topic in autism research, and a growing number of studies suggest it can enhance social function, including in people with autism.

Preliminary findings, presented last month at the International Meeting for Autism Research (IMFAR) in Toronto, from seven children with autism found that a single nasal puff of the hormone enhances activity in brain regions known to process social information, such as inferring someone’s emotional state from looking at their eyes.

It’s not yet clear, however, whether these changes in brain activity will lead to changes in social behavior.

This is the first double-blind trial of oxytocin — meaning that neither the researchers nor the participants know whether the participants are taking oxytocin or a placebo — that relies on brain imaging. Yale University researchers gave children and teens ages 7 to 18 a single dose of the hormone or placebo using nasal spray on two separate occasions.

The children then performed a number of social tasks while they underwent functional magnetic resonance imaging. Compared with placebo, oxytocin boosts brain activity in the medial prefrontal cortex, the temporal parietal junction, the fusiform gyrus and the superior temporal sulcus, brain areas that play a key role in processing social information, the researchers found.

“For these seven kids, it seems oxytocin really enhances brain activation in regions that are very important to how we function in the social world,” said Ilanit Gordon, a postdoctoral researcher in Kevin Pelphrey’s lab at Yale University, who presented the research at the conference.

The researchers ultimately aim to enroll 40 children. Gordon is doing a number of behavioral tests as part of the study to determine whether the treatment affects social behavior.

If proven effective, oxytocin would be likely to be used in conjunction with established behavioral therapies, Gordon told me later.

Mutations in genes that regulate oxytocin release are thought to raise the risk of autism or autism-like traits, although some findings are contradictory. A number of clinical trials of oxytocin as a treatment for autism are under way.

In another study presented at IMFAR, researchers showed that giving fathers oxytocin boosts the hormone’s levels in their babies, and enhances eye contact between fathers and their infants.