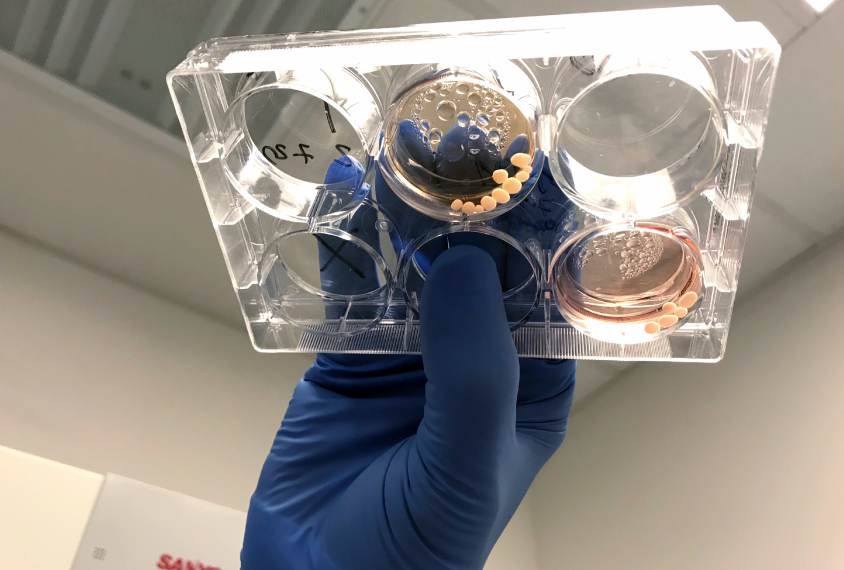 This article was originally published 4 November 2018, based on data presented at the 2018 Society for Neuroscience annual meeting in San Diego, California. We have updated this story following publication of some of the data in Cell Stem Cell on 29 August 20191.

Brain organoids made from typical human stem cells begin to show synchronized neuronal firing patterns after growing in a dish for at least four months1. Organoids that carry a mutation linked to autism do not show the same patterns.

The activity in the typical organoids involves periods of neuronal firing and calm that follow an oscillatory pattern.

Scientists have recorded electrical activity from brain organoids, but it has been unclear whether this activity is organized into networks, as it is in human brains2. Studying this activity could lend insight into how neuronal networks arise during brain development.

In the new work, the researchers recorded electrical activity from the organoids using a technique similar to electroencephalography (EEG). After four months, the organoids began to show weak oscillatory patterns; the oscillation became more pronounced at around six months. A few features of the firing patterns, such as the frequency of spikes, look similar to what other teams have found in preterm infants, the researchers say.

The organoids “are not equivalent [to human brains] by any means,” says Cleber Trujillo, a project scientist in Alysson Muotri’s lab at the University of California, San Diego who presented the work. “But we can see that some of the features of the preterm baby EEG can be used to predict human development in the dish.”

Other researchers urge caution and say the origin of oscillations in brain organoids is likely to be different from that in human brains.

“I think it’s very exciting data and it’s a very creative use of data analysis techniques applied from one field to another,” says Michael McConnell, assistant professor of biochemistry and molecular genetics at the University of Virginia in Charlottesville, who was not involved in the work. He says he would like to see whether patterns in subsets of neurons recapitulate what’s seen in people.

The team assessed electrical activity in organoids made from typical human stem cells, and from stem-cell lines with a mutation in MECP2, the gene mutated in Rett syndrome; MECP2 is also linked to autism.

The researchers plated the organoids in dishes with 64 electrodes and then measured electrical activity over each week for several months.

Synchronized firing patterns emerged in the typical organoids after four months, but not in the mutant organoids; the latter are also smaller overall.

Together, these data suggest that MECP2 is involved in forming neural networks during early development, Trujillo says.

The team then sought to compare the electrical patterns with those in developing human brains. They used a machine-learning algorithm to compare their results with those from a dataset of 567 EEGs from babies born after 24 to 38 weeks of gestation3.

“The data follows the same trajectory,” Trujillo says. These findings have garnered some criticism in the field. “Some people are skeptical or afraid because we are comparing people with a ball in a dish.”