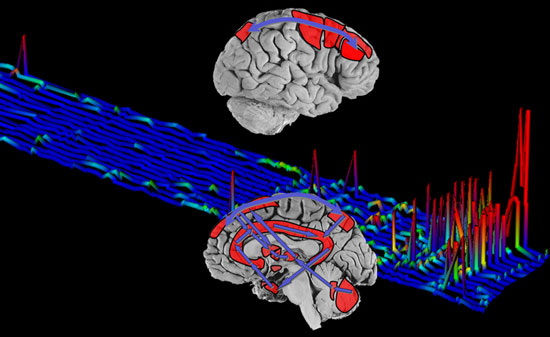 The standard approach to finding candidate genes is to use genome-wide association studies, in which researchers survey complete sets of DNA of people with a disorder, and compare the results with those of healthy controls.

For psychiatric disorders such as schizophrenia and autism, however, this approach has proven tricky: few strong candidates have emerged, in part because diagnoses lump together people with diverse social and behavioral symptoms.

In contrast, imaging genetics involves examining how genes identified by genome-wide scans relate to patterns of brain activation. Although researchers are still developing appropriate statistical analyses for the technique, its proponents say that this method can find quantifiable, disorder-specific features that will narrow the hunt for candidate genes.

“As more and more genetic variants have been studied, this has been shown to be a really cool method to study psychiatric genetics,” says Andreas Meyer-Lindenberg, director of the Central Institute of Mental Health in Mannheim, Germany. “It’s especially relevant for psychiatry, because the diseases are so complicated.”

Until now, researchers employing imaging genetics had compared brain scans from people carrying a particular genetic variant with those of controls.

In the new study, researchers instead quantified brain activity after giving 28 people with schizophrenia a memory task. The task activates the prefrontal cortex, a large region of the brain involved in many functions, including understanding others’ intentions. Previous studies have shown that this region is more active during memory tasks in people with schizophrenia than in healthy controls.

Correlating differences in the participants’ brain activity with single-nucleotide variations in their DNA, the researchers found that those with increased activity in the prefrontal cortex carry certain variants of two genes, RSRC1 and ARHGAP18. Although the precise role of these genes is unclear, both are thought to be involved in neuronal proliferation and migration during prenatal development.

“That was interesting because these genes have never been implicated in schizophrenia before, and we know that some aspects of schizophrenia are neurodevelopmental,” says lead investigator Steven Potkin, professor of psychiatry and human behavior at the University of California, Irvine.

“[The validation] helped verify that this was a useful approach,” Potkin says.

Imaging genetics dates back to 2001, when Daniel Weinberger and colleagues from the U.S. National Institute of Mental Health found that people with schizophrenia who carry a particular genetic variant tend to have lower activity in the prefrontal cortex and more memory deficits than do controls2.

The field grew quickly, and in 2005 Potkin and Weinberger organized an annual meeting to help scientists from diverse disciplines — statistics, genetics and psychiatry — debate the best way to combine imaging and genetic data.

So far, imaging genetics has been applied primarily to schizophrenia research. But in a study published last May, Meyer-Lindenberg’s group gathered imaging data from a group of healthy people with variations in AVPR1A, an autism-linked gene that codes for a protein involved in emotion perception and social behaviors.

Given the gene’s function, the scientists hypothesized that AVPR1A is linked to activation of the amygdala, a brain region involved in the processing of emotions. Imaging studies have shown that an abnormally sized amygdala in people with autism contributes to the communication and social impairments in the disorder.

Sustained activation of the amygdala may also underlie the difficulties people with autism have in interpreting emotions from facial expressions.

To test their hypothesis, Meyer-Lindenberg’s group showed photos of faces depicting different emotions to people with and without the AVPR1A variants. The researchers found that variants in one region of AVPR1A are associated with less activation in the amygdala, and variants in another with more activation, compared with controls3.

Although studies such as Meyer-Lindenberg’s show how genes control the activation of select brain circuits, imaging genetics isn’t precise enough to determine the mechanisms of that control. That’s partly because, with millions of different genetic and imaging variables, and relatively few study participants, preliminary studies may turn up false positive results. Each voxel — a three-dimensional pixel — of a brain image, for instance, is a potential variable.

“We now have the technology to measure one million or more individual variations in DNA sequence,” says Jason Moore, a professor of genetics at Dartmouth Medical School in New Hampshire. “When you combine that with the thousands of different brain measurements, then you have a very high dimensional problem from a statistical point of view.”

To rule out chance variations in his study, Potkin’s group used a few statistical tests. One involves shuffling genetic data from the study participants into random patterns more than 500,000 times. This approach predicts chance variations, and has been used by others in the imaging genetics field to eliminate potential false positives4.

Still, the study statistically addresses one genetic marker at a time, rather than multiple genes that could be working together to change how the brain functions.

“The problem is that most people still look at one gene at a time, because [those are the] analytical tools available,” Moore says. “We need to look at combinations of genetic markers to try to understand brain structure and function and, ultimately, disease susceptibility.”

Several years ago, Moore’s group developed a free software called multifactorial dimensionality reduction, which he and others used to examine how networks of autism gene candidates predict abnormalities in levels of serotonin, a signaling molecule that regulates sleep, mood and appetite5. Statistical tools like this one could potentially combine networks of candidate genes with imaging data, Moore says.

“The imaging adds a layer of complexity that we have not incorporated into the software yet, but that’s certainly in the direction we’re moving,” he says.

Potkin says he and his colleagues are trying to map the networks of genes that interact with RSRC1 and ARHGAP18. The goal is to find drugs that block or enhance these networks to serve as therapies for schizophrenia.

“Once you find a gene, no matter how you find it,” Potkin says, “you have to figure out what it does.”