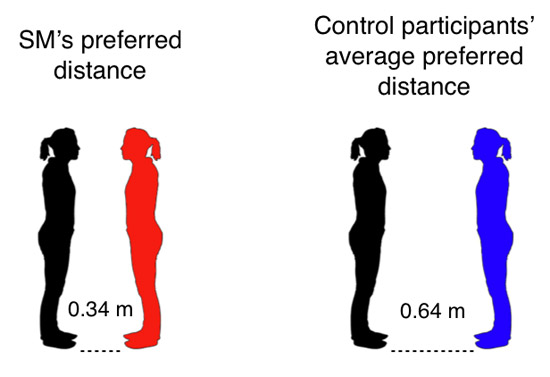 Too close for comfort: A woman lacking an amygdala is comfortable being twice as close to another person as are healthy controls.

How close is too close when you stand next to someone? For someone without an amygdala, that’s a tough question to answer.

A report in the October issue of Nature Neuroscience says the amygdala — the brain region that controls emotions, as well as the way individuals interpret and respond to social situations and recognize possible threats — governs the preference for personal space1.

The amygdala is also thought to be involved in some social and emotional aspects of autism, so the finding may explain personal space peculiarities observed in autism spectrum conditions.

Published studies on personal space in autism are scarce so far, but there is some anecdotal evidence that people with autism aren’t aware of other people’s personal space limits — standing too close or too far from people during social interactions, for instance, or walking between two people in conversation.

A related condition called Williams syndrome, meanwhile, is characterized by outgoing individuals who tend to violate other people’s personal space, touching or standing too close to people they don’t know well.

“We know — anecdotally, at least — that many people on the autism spectrum appear to treat personal space differently than typically developing people,” says Sarah Parsons, senior research fellow at the University of Birmingham’s Autism Centre for Education and Research.

Parsons’ research suggests that individuals with autism are significantly more likely than matched controls to infringe on other people’s personal space in virtual reality environments. For instance, the team’s studies suggest that children with autism spectrum disorders and lower verbal skills are more likely to bump into other people or objects in a virtual café; those with autism and strong verbal skills do the opposite, slightly shying away from others2,3.

The new report on personal space is based on a woman known as S.M., the famous case study subject who lacks a functional amygdala. Both lobes of the woman’s amygdala are calcified as a result of a rare genetic disease.

Ralph Adolphs and his colleagues at the California Institute of Technology have found that S.M. tends to have problems judging what’s appropriate in social situations. She also has trouble recognizing emotions — especially fear — when she looks at other people’s facial expressions.

They report in this paper that S.M. is comfortable being twice as close — about one foot, rather than two feet — to another person compared with 20 healthy controls of different ages, genders and ethnicities.

“There’s a range within the control group,” says first author Dan Kennedy, a postdoctoral fellow in Adolphs’ lab. “But every one of the individuals preferred a larger distance than [S.M.].”

Functional magnetic resonance imaging (fMRI) in eight healthy controls also revealed that activation of the amygdala is significantly greater when the individual is told that the experimenter is standing beside the MRI machine than when the experimenter is 15 feet away.

“It makes sense to me that the amygdala would be involved in what’s appropriate for personal space,” says Melissa Bauman, assistant adjunct professor of psychiatry and behavioral sciences at the University of California, Davis’ MIND Institute.

Bauman and others have shown that amygdala damage in adult rhesus monkeys makes the monkeys more likely to approach other monkeys or humans4. When the damage occurs earlier in development, in baby rhesus monkeys, however, they become less fearful of new inanimate objects, such as rubber snakes, but more fearful in their social interactions with other monkeys5,6.

Differences in amygdala size and activity have also been detected in people with autism7, though the findings so far have been something of a mixed bag. Some studies have found that the amygdala is smaller in those with autism8, whereas others report that it is larger9. One study found that the larger the amygdala, the more severe the social and communication problems seen in children with autism spectrum disorders10.

It’s unclear whether the amygdala directly regulates personal space interactions or whether it’s involved in learning social norms and behaviors, including acceptable distance for personal space, says Katherine Loveland, professor and assistant dean of psychiatry and behavioral sciences at the University of Texas Medical School at Houston.

Although non-verbal social behaviors — including personal space — are not as well studied as other features of autism, Loveland notes, it’s possible that some of the unusual physical actions associated with autism reflect differences in the way individuals understand and use personal space.

Because the amygdala contributes to the emotional importance or salience that individuals attribute to their experiences, explains Adam Anderson, associate professor of psychology at the University of Toronto, it might also be difficult to tease apart the amygdala’s role in personal space from its importance in learning social behaviors in general.

“It’s something that clearly is shaped by the culture you’re born in,” explains Anderson, who was not involved in the study. “Our suggestion is that amygdala function is involved in learning these rules.”