The genetics of autism

(Scroll down to see the full list of articles in this special report.)

Autism is a complex condition, with a wide range of features that vary in their severity. Autism’s genetic roots are equally complex. The condition runs in families, but most of the relevant mutations identified so far arose spontaneously in the sperm or egg or after fertilization.

In the past 10 years, scientists have identified some 65 genes tied to autism, and the list continues to grow. Many of these genes play key roles in the brain. Some scientists say the time has come to stop searching for autism genes and focus instead on understanding their function.

Some research teams are expanding their search to mitochondrial DNA, which is inherited from mothers, and to the ‘dark genome’ — the 98 percent that doesn’t contain genes. Elements buried within the dark genome regulate the expression of genes. Environmental factors and experiences can also alter gene expression by changing the patterns of chemical tags on DNA.

Genetic variants that are common in the general population may work together in groups to increase the risk of autism. To find these variants, researchers must gather DNA from tens of thousands of people with autism — a feat made possible by the participation of families in autism studies and groups. Advocacy groups that unite people with the same rare mutations are helping to reveal how autism’s genetic heterogeneity gives rise to its wide spectrum of features.

You can hear more about gene discovery in autism in our Spectrum Stories podcast. Articles from our archives round out this special report on the genetics of autism. After a decade of fast-paced discovery, researchers are racing toward bigger datasets, more genes and a deeper understanding of the biology of autism. Families need more support from researchers in order for their heroic efforts to be optimally effective. Autism researchers should ditch the false dichotomy between common inherited variants and much rarer random mutations. 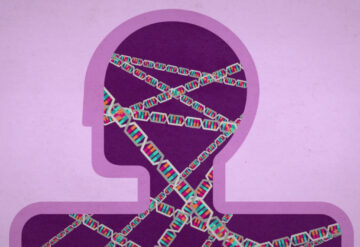 The more scientists dig into DNA, the more intricate its contribution to autism seems to be. Here, we unravel the complex genetics of autism. The secret to understanding autism lies largely in our DNA. In race to crack autism’s code, two contenders shoot ahead

Two candidate genes have risen to the top, and may help scientists understand what autism really is. How to best use a large volume of data to discover new genetic risk factors for autism is a matter of intense debate, particularly in light of historical challenges. We finally have access to whole-genome sequences from people with autism. But before we can properly interpret these data, we need to know what we’re looking for. Genome’s ‘dark’ side steps into spotlight of autism research

RNA segments that control when and where genes are expressed may be involved in autism. Inside Scoop From the Autism Anchors: Special report on genetics Autism researchers’ top priority should be shifting their focus to finding treatments for severe forms of the condition. Where do we stand in our understanding of autism genetics — and what major questions remain? A molecular biologist supplies answers in stanzas. The landscape of chemical modifications on the DNA of people with autism could reveal clues to the condition and lead to treatments. Variants of some mitochondrial genes may contribute to autism — in some cases, by teaming up with genes in the nucleus. Spectrum Stories: The role of genetics in autism

We know that genes play a role in the condition; however, finding genes, and then knowing what they do is a challenge. What makes a gene an autism candidate? Not everyone agrees The curious connection between autism and cancer How to mine treasure troves of genetic data