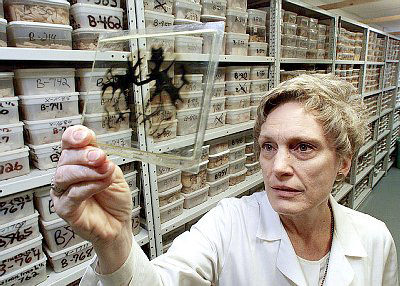 If you’re a neuroscientist hoping to do experiments on brain tissue from children with autism, you have a steep road ahead of you: Existing brain banks hold samples from just 1,300 young brains, including only a few hundred from children with the disorder.

Research on postmortem brains, particularly young brains, is messy — biologically, politically and ethically. But the tissue provides a unique window into how autism takes shape in the developing human brain — bringing researchers many steps closer to the problem than genetic blood tests, brain imaging studies or psychological experiments.

Last week, an editorial in Nature called on government and nonprofit organizations to push for an international tissue bank of brains from tens of thousands of children and fetuses, either healthy or with any of various brain disorders.

There are many reasons for the dearth of autism brains, beginning with the fortunate fact that autism is not typically fatal. When it is, however, it’s often sudden, leaving families particularly distraught.

What’s more, acquiring brain tissue can be a logistical nightmare. Brain banks have about 24 hours after a death to distribute consent forms, arrange for a local pathologist to recover the tissue and have it safely transported to the facility.

Nonprofits, and particularly those that do advocacy, are well positioned to pull this off. For example, IDEAS — an advocacy group for people carrying duplications in chromosome region 15q11-13, who often have autism — educates families about donation, and has set up a toll-free number that parents can call to begin the donation process.

Still, because the syndrome is rare, the numbers are small: 13 families have donated in the past five years.

Some researchers say better outreach to families and coroners can help. According to a feature story in the same issue of Nature, David Amaral of the MIND Institute at the University of California, Davis, is calling for a national, centrally organized network of brain banks for autism.

In December, Autism Speaks, the country’s largest autism advocacy organization, and the Simons Foundation, SFARI.org’s parent organization, submitted a letter of recommendation to the National Institute of Mental Health. The letter outlined a government-funded autism brain bank, but with private organizations spearheading the family outreach.

The National Institutes of Health already supports 11 brain banks for a range of brain diseases, including autism. It’s unclear whether it will add yet another brain bank, or figure out an umbrella strategy for all of them.This fall, the agency posted a ‘concept clearance’ — an idea that may be developed for grant proposals — for a National Neurobiobank that would acquire, store and distribute brain samples.

In the meantime, the two organizations are beginning to discuss scientific standards for an autism brain bank: How will tissue be stored? Who decides how tissue is distributed, and how?

This idea of a national brain bank for autism isn’t new: It has come up at just about every autism conference I’ve been to in the past four years. With these nonprofits gearing up to join forces with the NIH, it finally seems to be gaining momentum.

As Autism Speaks’ Robert Ring told the Nature reporter: “Give us one year and we’ll have developed a collaborative model with the scientific community.”