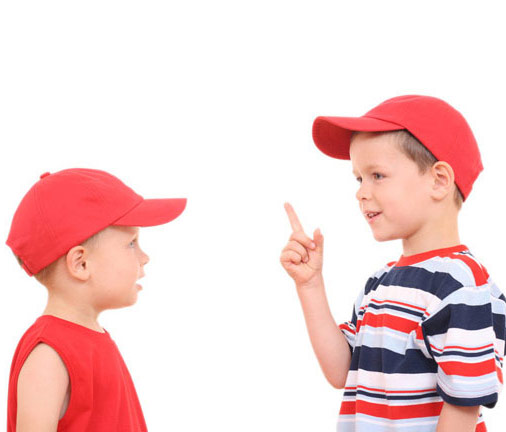 One of the first things that autism pioneer Leo Kanner noticed about the children he was seeing was that they had a tendency to refer to themselves as ‘you,’ echoing his phrasing of questions he asked them.

Nearly 70 years later, we have a technology — functional magnetic resonance imaging, or fMRI — that can peer into the brain to illuminate which regions are involved when people switch personal pronouns in conversation. This task, called deictic shifting, is impaired not just in children with autism, but also in some adults with the disorder.

A new fMRI study published in Brain in July reports that connectivity between two brain regions involved in self-awareness is greatly reduced in people with autism when they engage in deictic shifting.

In the study, researchers presented 15 adults who have high-functioning autism, all but one of them male, and 15 matched controls with images of the front and back covers of a book held by a woman named Sarah. The book covers depict different objects, for example, a carrot on the front and a house on the back. Sometimes Sarah opens up the book to display both covers and sometimes she folds the book so that only one cover is visible.

Over 24 trials, Sarah asked study participants four variations on a single question: “What can ? see now?” Half the time, the “?” was the proper name of the participant or Sarah. The other half of the time, Sarah used a pronoun, either ‘you’ or ‘I.’

In this manner, participants had to execute a series of rapid shifts between “What do you see now?” to “What do I see now?”, “What does Sarah see now?” and “What does (participant’s first name) see now?”

The researchers found that people with autism respond more slowly and less accurately to questions that require them to shift perspective from ‘you’ to ‘I.’ The scans revealed that connectivity between the right anterior insula and the precuneus is significantly lower among individuals with autism when carrying out this task.

Conversely, the precuneus is far more active in the individuals with autism when they’re confronted with proper names, suggesting that this brain region is working overtime to properly identify self versus other.

These results suggest that pronoun reversals in autism are not simple semantic glitches. Instead, they appear to provide yet another example of the profound impairment in autism of the ability to understand self and other in reciprocal relationships.

After all, if I can’t distinguish between you and me, how can I ever get to the immeasurably more complex category: We.