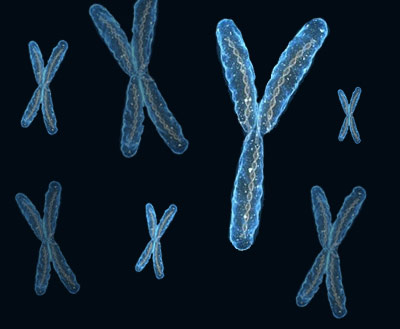 Several hundred genes are likely involved in autism, according to the latest trio of studies looking at the genomes of children with the disorder. But let’s not forget that one of the most intriguing genetic links has been known for decades. Autism affects four times as many boys as girls. And at the level of DNA, there’s only one difference between the sexes: Girls have two X chromosomes, boys an X and Y.

So why don’t we hear more about that Y?

The male chromosome only carries about 60 genes, of which 2 have been linked to autism. Nevertheless, some new research on children born with extra sex chromosomes suggests that there may be more than meets the Y.

About 1 in 1,000 boys are born with an extra X chromosome, a condition known as Klinefelter syndrome. The disorder is often not detected until adolescence because its effects are fairly mild, including some intellectual disability, speech and language delay, attention problems and low muscle tone. Around the same proportion of infants are born with an extra Y chromosome, and show a similar range of impairments.

In a study published earlier this month in Pediatrics, Judith Ross’s team at Thomas Jefferson University in Philadelphia studied 108 boys born with either condition, and 50 controls. The researchers found that half of the XYY group and 12 percent of the Klinefelter group met criteria for further autism evaluation on the Social Communication Questionnaire, a ten-minute parental survey.

The study didn’t use gold standard autism diagnostic tests, but Ross says her unpublished data have found that around 30 percent of boys with XYY have bona fide autism. An earlier study, published last October, reported autism diagnoses in 19 percent of children with XYY and 11 percent of those with Klinefelter. Those numbers are all dramatically higher than the 1.1 percent prevalence reported in the general population.

For example, neuroligin 4, one of the most talked-about autism candidate genes, has one version that’s found on the X chromosome and another that’s found only on the Y.

“There hasn’t been a lot of attention paid to the Y,” Ross says, partly because genetic linkage studies of years ago didn’t have the statistical power to look only at males. “But it’s starting to turn up.”

It could be that autism arises when the neuroligin 4 protein (or others on sex chromosomes) is expressed too much or too little. This gene dosage effect has been seen, for example, in individuals with autism who carry deletions or duplications in chromosome 16.

More Y chromosome glitches may be discovered as researchers continue to sequence the genomes of children with autism. In the meantime, Ross and her colleagues are planning to measure the expression of several Y-chromosome genes in blood samples from boys with these two chromosomal syndromes. “Once we sort out these relationships in our XYY population, then we can try to extrapolate what we’ve learned into the general autism population that has only one Y,” she says.