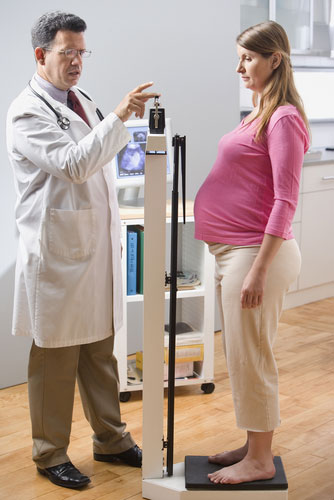 All women gain weight when pregnant, but new research, published in the November issue of Pediatrics, suggests that modestly higher-than-normal weight gain during pregnancy may serve as a marker for a small but significant increase in a child’s autism risk.

The findings, which echo the results from earlier research on this topic, are based on a large study of 416 individuals with autism. The weight gain is most likely an indicator of the real risk factor, a problem with the regulation of sex hormones in the mother, the researchers say.

Some of the new study’s findings and methods differ from those of its predecessors. The earlier studies linked autism risk to a woman’s body mass index (BMI) — a gauge of body fat based on weight and height — before she got pregnant. But they did not account for certain confounding factors. For instance, they did not control for whether the baby was born early, which can increase autism risk, or whether the woman had given birth before, which could raise her pre-pregnancy BMI.

The new study, which controlled for these and other factors, found that women whose children are later diagnosed with autism are more likely to gain slightly more weight than normal during pregnancy. It found that pre-pregnancy BMI has no effect on autism risk.

The study used information from two Utah datasets. One of the datasets includes 128 children with autism and 10,920 controls from the three most populous counties in Utah. Researchers verified these children’s autism status by looking at their medical and educational records, but not by using gold-standard diagnostic evaluations.

The other group includes 288 children with autism and their 493 typically developing siblings from 252 families, including 23 families who have more than one child with the disorder. All of these children have confirmed autism diagnoses.

The odds of having a child with autism increase as the woman gains weight during pregnancy, says lead researcher Deborah Bilder, assistant professor of psychiatry at the University of Utah in Salt Lake City. In the first group, there is a 10 percent increase in the odds of a child being identified with autism spectrum disorder for every 5 pounds of weight a woman gained during her pregnancy. In the other group, the odds increase to 17 percent for every 5 pounds of weight.

A woman with a normal BMI typically gains between 25 and 30 pounds during pregnancy. The study found that mothers of children with autism gained only about 3 pounds more during pregnancy on average, a clinically insignificant amount, than the mothers of the typically developing controls and siblings.

“You can’t use weight gain during pregnancy to screen for a baby’s risk of developing autism,” Bilder says. “That’s why you need to be able to figure out what exactly this weight gain is reflecting that it has in common with autism.”

Weight gain during pregnancy also carries greater risk of intellectual disability, defined as having an intelligence quotient (IQ) under 70, in the child. To see whether low IQs were driving the increased autism risk, the researchers removed children who have both autism and intellectual disability from the analysis. The outcome stayed the same, suggesting that the risk of autism is a real phenomenon.

Gaining more weight during pregnancy may be a proxy for other problems in the fetal environment, Bilder says. For example, steroid hormones that can increase a woman’s weight also affect how genes are expressed in the womb. It’s possible that abnormal regulation of these hormones during fetal development increases autism risk in the child at the same time that it causes the mother to gain weight.

The researchers next plan to measure levels of steroids and other hormones in blood samples from pregnant women to parse these results.