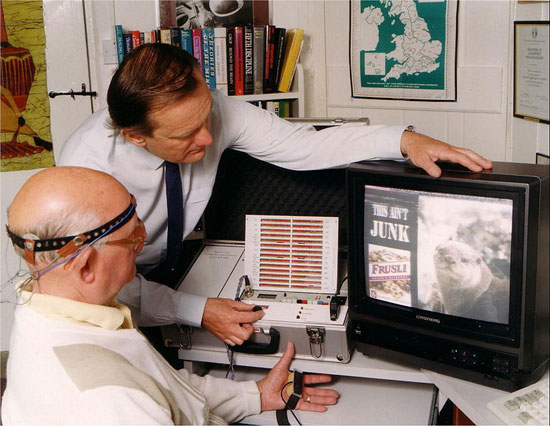 Last year, a young man I know decided to treat his recurrent but benign brain tumor with Chinese traditional medicine. When I saw him a few weeks ago, he looked great. But when he told me that his doctor assesses the tumor by checking the sweat on his forehead, I felt queasy.

People may argue that alternative therapies for autism — acupuncture, yoga, dance therapy or massage — similarly improve behaviors associated with the disorder. But as with my young friend, I fear that appearances might be deceiving.

A new review of neurofeedback, one of the most touted alternative therapies for autism, does nothing to allay the skepticism I share with my colleague Virginia Hughes. The article, published online 14 July in Developmental Medicine and Child Neurology, shows that each of the five controlled studies of neurofeedback in autism thus far is plagued by serious methodological flaws.

Neurofeedback is biofeedback for the brain: Its goal is to teach users how to alter the brain waves created by groups of neurons firing together at various frequencies.

It’s true that rigorous studies have found anomalies in brain wave patterns in individuals with autism, and that these disturbances may be related to connectivity problems in the brain.

Neurofeedback uses electroencephalograms to help individuals visualize electrical activity in their brain, and ultimately, its proponents argue, to speed up or slow down their brain waves.

But the data supporting neurofeedback are mixed at best.

Of the five controlled neurofeedback studies published so far, according to the review, one study used four different protocols and only 12 of its 20 participants completed the 20 sessions. In another study, parents reported gains in communication and social interaction after neurofeedback — but because they knew that their child was assigned to the intervention group, those reports may have been influenced by their hopes for the trial.

This has been linked to the difficulties people with autism have in understanding and imitating others’ behavior. Proponents of neurofeedback say that they can reactivate mu suppression in those individuals and that this improves symptoms of autism.

One of the two studies found that neurofeedback suppressed mu waves in both the typical control group and the treatment group, with a corresponding improvement in imitation skills in both groups.

However, a second study by the same group of researchers did not replicate the improvement in skills in the treatment group, even though the researchers again reported mu wave suppression in both groups.

Finally, some of studies incorporated other types of biofeedback, such as controlling breathing. As anyone who has ever taken a yoga class can attest, just breathing in and out slowly can have a calming effect.

The review is a welcome addition to the literature, even though its findings may disappoint those who were hoping for an endorsement of this non-invasive treatment. But given the cost of the therapy — upwards of $3000 for a course of 30 sessions — the researchers have performed a service to parents who can spend that money on less questionable interventions.