Why we must be patient when searching for an autism biomarker 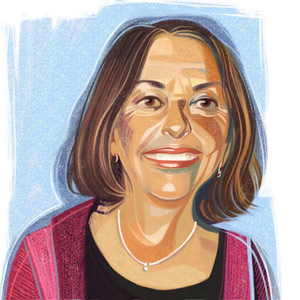 We have found differences in brain functioning in children with autism at an age that would be ideal for offering an early diagnosis1. So why do we not want to pitch our findings as evidence of a new biomarker?

Autism is a behavioral syndrome that emerges sometime in the second or third year of a child’s life, but the search is now on for ‘biomarkers’ that could serve as a diagnostic test for autism at a much earlier point in time, providing the opportunity for intervention when the greatest impact may be possible.

One approach for finding biomarkers is to study infants who have an older sibling with autism, and who begin life with increased familial risk (the estimated odds for these infants developing autism are one in five). The infants can be followed from shortly after birth until the time when a firm behavioral diagnosis can be made, usually by age 3. Several groups, including my lab in collaboration with Chuck Nelson’s lab at Harvard Medical School, are using this research design to explore measures of brain development and see whether these might yield neural biomarkers.

In a paper published in August in PLoS One, we found significant differences on a measure of functional brain connectivity in the first year of life between infants with high familial risk and those with no family history of autism1. The infants listened to speech sounds (such as ‘da’ and ‘ta’) while we recorded their brain activity using electroencephalography (EEG), a noninvasive measure of brain functioning.

From the raw signal elicited soon after the onset of each sound, we computed the linear coherence (a measure of synchrony) in brain regions that are important for processing speech and language. Higher linear coherence is taken as a measure of greater connectivity between these language network regions.

Between 6 and 12 months of age, linear coherence increased in the infants at low risk, as we had expected. In contrast, in the high-risk infants, coherence decreased over this time period, and by 12 months was significantly lower than in the group of low-risk infants, suggesting lower regional connectivity. The infants who were later diagnosed with autism had the lowest coherence scores compared with all others.

Although our sample size is still relatively small, the results are exciting, adding to other studies that have found differences in brain functioning in young infants later diagnosed with autism.

Have we found a biomarker that could eventually be useful in diagnosing autism in infants? On the face of it, this question is obviously far too premature and simplistic, but this is the message that is frequently presented in press releases and picked up by the media. Often, when a study shows a difference between the brains of people who have autism and the brains of those who do not, the press tells the public that we are on the cusp of having a new, and presumably better, approach to diagnosing autism early.

These stories leave out all the complexities of the science. Our study is small, so the most important next step would be to look for replication in an expanded sample. We replicated our finding using another paradigm and technology in the same group of infants2. But independent replication is the key to evaluating whether a finding will hold up over time.

Is what we found unique to infants at risk for autism, an important criterion if this biomarker is to be used in diagnosis? If not, then we may have identified a non-specific biomarker that extends to other neurodevelopmental disorders, such as language disorders or dyslexia, which might also produce early differences in the neural circuitry for language.

In our study, we did not find sharp boundaries: The distributions of individual scores for infants in each group overlap, so as a biomarker it will not be sensitive enough to be used for diagnosis on its own.

At best, then, this measure signals risk rather than autism itself. The finding also raises the question of whether this ‘biomarker’ would be found in infants with autism who don’t have an older sibling with the disorder. So, for now, we have only found a measure that potentially can predict autism for infants with familial risk.

Clearly, there are several important follow-up studies that are needed before we can reach any conclusions. And this applies to all studies that identify neural or cognitive differences between infant siblings and controls.

We need to remind ourselves that this line of work has just begun; scientific progress involves successive studies that address the questions raised by findings from earlier ones. The challenge, however, is that prospective developmental research designs are expensive and take a minimum of about five years for a reasonable size sample. But it doesn’t seem than anyone — scientists, funders, the media, the public — has enough patience.

The evidence emerging from many neurodevelopmental, cognitive and behavioral studies of infant siblings points in one direction: Autism is a disorder that emerges over time. In our study, for example, it is the difference in the developmental trajectory between 6 and 12 months that is most significant, not the measure taken at any single time point. All this suggests that studies of older children or adults with autism are not going to yield diagnostic biomarkers, though they may provide biomarkers that could be useful for other purposes, such as sensitive measures of response to treatment.

It is time for us to reevaluate how we communicate the findings from our research on biomarkers. We must stop saying that every study showing differences between people with autism and controls has found a new approach to diagnosis. There are dangers in repeatedly offering a false promise of having found the kind of objective, biological test for autism that the public is hungering for; instead we should take the opportunity to present our work in a realistic light that conveys not only what we have found in each study, but also what still needs to be done.