What the FOX says: Genes that bridge autism, language 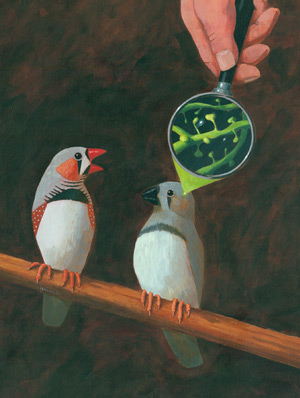 Language is perhaps the most complicated human activity that we know of. We first learn it during childhood, when the brain is especially plastic and able to rapidly acquire new information. As we grow, speech and language becomes the cornerstone for how we communicate with the world.

Autism spectrum disorders have many effects on speech and language development, ranging from severe disruptions and delays to hyperfluency. Although diverse, this range of language symptoms probably underestimates the multitude of gene networks associated with autism. This makes it challenging to connect specific gene networks with particular language-related symptoms.

In hopes of finding genetic entry points at the intersection of complex cognitive and communicative behaviors, researchers have endeavored to identify genes associated with language development. Forkhead box P2, or FOXP2, has emerged as one key candidate linking autism and language1.

Researchers initially identified FOXP2 in individuals who had an inherited speech disorder and dubbed it, dubiously, a ‘language gene.’ FOXP2, it turns out, facilitates the development of brain circuits important to the complex and sequential movements of the face and mouth thatunderlie human speech.

FOXP2’s role in orchestrating the higher cognitive processes involved in language, as well as its association with autism, are just now coming into focus.

FOXP2 regulates the transcription of genes into messenger RNAs, or mRNAs, the precursors of proteins — directing protein expression and repression during development. It is through these partner genes and their networks that FOXP2 may have its greatest impact on speech and autism. Several reports have shown that FOXP2’s targets include a number of known autism genes, such as CNTNAP2 and MET2, 3.

This suggests that the complex transcriptional networks important for speech development may also be important in autism.

In contrast, researchers have yet to find a direct association between genetic variations in FOXP2 and autism, despite numerous attempts to do so4.

So, where do we go from here? One approach is to identify all of FOXP2’s target genes in the human brain. This type of network analysis would broaden our understanding of the molecular mechanisms at risk in autism, and may provide inroads for developing targeted therapeutics.

For example, a 2012 study found a direct link between the gene encoding FOXP1 and autism5. FOXP1 is another transcription factor that interacts with FOXP2 to regulate gene expression. Disruptions in coordinated gene regulation by these two proteins may underlie risk for autism and deficits in speech and communication.

A second approach is to study the relationship between gene expression and vocalization by directly manipulating FOXP2 and its autism-related targets in animal models.

Genetically modified mice have proven to be extremely powerful for studying both the biological function of FOXP2 and other autism-related genes in brain development and behavior. Mouse models with mutant FOXP2, or autism-associated FOXP2 targets such as CNTNAP2 or SRPX2, exhibit fewer ultrasonic vocalizations than controls do6, 7.

However, we do not completely understand the role of these vocalizations in mouse communication, the brain circuitry underlying their production or their relation to speech8, 9. This limits the usefulness of mice for understanding speech development.

Children learn speech during a sensitive developmental period through extensive practice and by imitating adults. So it is unclear whether largely innate behaviors, such as mouse vocalizations, can model genetic deficits in speech learning.

Species that learn their vocalizations, such as songbirds, may provide an important way forward in the study of speech mechanisms and complex cognitive and communicative behaviors.

Like humans, songbirds learn their vocalizations first by babbling, slowly building their repertoire of imitations, and finally by stringing these sounds together into meaningful communication10.

Also similar to human speech, birds learn and control their songs through specialized neural pathways that connect the cortical and the basal ganglia regions of the brain11. Studies of this circuitry and song behavior have forged important insights into the neurobiology of learned vocal behaviors. They are also beginning to yield important clues to the genetics of speech.

Songbird and human brains express FOXP2 in the same regions12. Birds with reduced FOXP2 expression in one portion of the basal ganglia important to song-learning struggle to control vocal variability and are unable to accurately imitate songs during development. These symptoms are similar to the speech-related deficits seen in people who have genetic mutations in FOXP213, 14.

Network analysis of singing-related genes in the songbird basal ganglia have revealed tantalizing overlaps with the targets of human FOXP215. A number of these genes also overlap with known autism-related genes, such as HOMER1 and MEF2C. It remains to be seen whether disruption of any of these autism genes leads to deficits in vocal learning, but this seems like an area ripe for investigation.

FOXP2 is, thus far, one of only a handful of genes with strong connections to both language and autism. We believe that delving deeper into the function of FOXP2 in the brain will be instrumental to understanding both the etiology and behavioral deficits of autism.

Genevieve Konopka and Todd Roberts are both assistant professors of neuroscience at the University of Texas Southwestern Medical Center in Dallas.