Vision as gateway for understanding autism 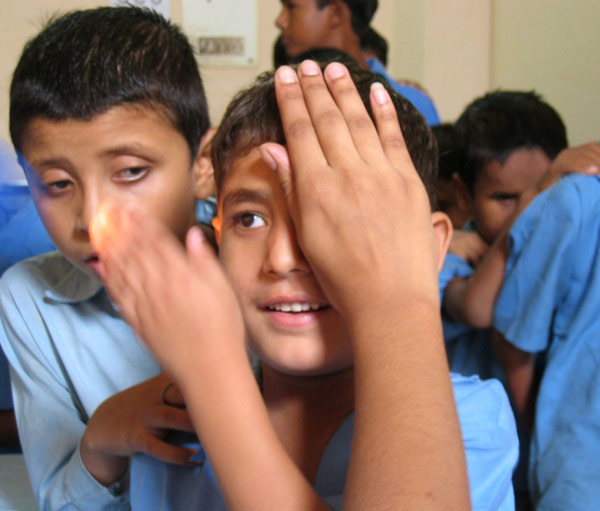 Of all of the aspects of brain function that one might decide to study in the context of autism, vision does not at first seem to be a particularly compelling candidate. Individuals with autism have no readily apparent impairments in the anatomy and function of their eyes compared with neurotypical individuals. In fact, children on the spectrum often seem to have impressively acute powers of visual observation and are able to pick out features in their visual world to which others might be oblivious.

Visual abnormalities, if they exist, seem to be almost a minor act in the complex theater of the autism phenotype. Autism is believed to be primarily a disorder of social function. The three key diagnostic criteria — impairments in communication, impairments in social interactions, and repetitive behavior— appear far removed from vision. Why then would one want to study visual function in autism?

The answer lies in the possibility that impairments in vision, even if they don’t cause autism, are likely to be manifestations of underlying neural abnormalities.

Some clues to this come from Leo Kanner’s original autism paper, published in 1943. Several of the individuals he describes exhibited behaviors that could be attributed to disorders of visual processing.

For example, case 1, called Donald T., was reported to have “developed a mania for spinning objects and jumped up and down in ecstasy as he watched them spin. At the same time, he had a dislike for self-propelling vehicles, such as Taylor-tots [vintage strollers], tricycles, and swings1.”

Several first-person accounts have also highlighted atypicalities of visual perception associated with autism. Temple Grandin in her 1995 book Thinking in Pictures says, “I loved to watch supermarket sliding doors go back and forth. When I watched the edge of the door move across my visual field, I’d get a little pleasurable chill up my back.”

Tito Mukhopadhyay in his 2008 book How Can I Talk if My Lips Don’t Move? describes the difficulties he has telling faces apart: “When I look at diagrams of skeletons and at pictures of face bones in the pages of National Geographic, I do not see any difference between those face bones.”

These reports are clearly anecdotal, but they do suggest that vision may be affected in unusual ways in people with autism.

A large part of the scientific excitement in studying visual processing in autism stems from the possibility that disorders of vision might cause some of the higher-order aspects of the autism phenotype.

For example, face recognition in normal observers is believed to rely upon configural processing, which is the ability to extract spatial relationships between visual elements such as the eyes, nose and mouth. If this ability is compromised, it has deleterious consequences for an observer’s accuracy in locating and identifying people.

For an infant born with this impairment, the long-term consequences can be significant. By not accurately identifyingfaces in the environment, the baby misses out on one of the most significant sources of social cues, such as those related to emotions and gaze. Furthermore, by weakening the ability to read lips, or see that someone is talking, face localization errors could also compromise language acquisition.

Being able to account for such diverse and significant featuresof autism by appealing to an underlying abnormality of visual function is enormously attractive. Not only would this further our mechanistic understanding of autism, but it could also suggest potent new diagnostic and therapeutic approaches.

If only the story were this straightforward.

If compromises of vision had the power to induce autism, one would have to predict a catastrophic scenario for the blind; this most extreme kind of visual compromise would be expected to lead inexorably to autism.

In a series of papers published over the last decade and a half, Peter Hobson of University College London has suggested that precisely such an overlap exists2,3,4. In Hobson’s own words, “The critical claim is that certain forms of developmentally significant early social experience are jeopardized by lack of vision5.”

As one might imagine, this is an audacious claim that, if true, would have far-reaching implications. However, its validity has been challenged. In a 2002 article, Simon Baron-Cohen cautions that it is important to ensure that the similarities in the behaviors of the two groups — individuals with congenital blindness and those with autism — are not merely superficial6.

In a similar vein, Michael Brambring says in a 2011 paper, “We see no justification in evaluating the special social-cognitive features of blind children as ‘clinical features’… The special features we observe are due to developmentally determined difficulties that can be explained by blind-specific causes without any need for a complicated theory7.”

Our own sense of this issue is akin to Brambring’s. We have worked with several hundred blind children and adults over the past few years as part of Project Prakash, a humanitarian and scientific initiative that provides sight-restoring surgeries to congenitally blind children in the developing world, and also studies their subsequent visual development.

As a result of this experience, we are not persuaded that congenitally blind children are at a significantly heightened risk for autism8,9,10. On occasion, we see children who are on the autism spectrum and are also blind, but the incidence seems to be no higher than in the normally sighted population.

The autism-like behaviors that Hobson refers to are more parsimoniously explained as direct consequences of the visual disability — for example, a lack of social interaction with others in the room could be because of a lack of visual awareness of their presence rather than intrinsic social apathy.

We seem to be back where we started. Why should we study vision in autism?

The answer that visual impairments might provide a causal account of some salient aspects of the autism phenotype is not entirely compelling. However, we believe that an alternative answer is potentially even more interesting and far-reaching. Atypicalities of vision associated with autism may not be the causes of the hallmark characteristics of the condition, but rather may be manifestations of more general underlying neural abnormalities.

From this perspective, visual disorders, though not themselves the cause of autism-related traits, become a gateway for approaching the fundamental causal mechanisms. For example, difficulty in using visual context could be the outcome of a more general problem with long-distance neural communication in the brain of an individual with autism. Similarly, impairments in gaze shifting might be manifestations of deficits in attention. Vision, in this view, is simply a domain in which general underlying impairments become manifest.

The possibility of focusing on vision is very attractive, given how rich our arsenal of experimental techniques for probing vision is. Besides helping further our understanding of some of the causal underpinnings of autism, a better characterization of visual processing in autism will also be useful for improving our battery of diagnostic tests.

Given these considerations, studying vision in autism seems to be a good idea. It has attracted significant research effort already and the number of laboratories exploring this domain is steadily increasing. A few recent reviews do an excellent job of summarizing the findings to date11,12,13.

Overall, the field is extremely active with researchers exploring many different avenues simultaneously. These include ‘low-level’ visual assessments such as acuity and contrast sensitivity, ‘mid-level’ tasks such as visual search and contour perception, and ‘high-level’ skills of face and object recognition, as well as more socially oriented tasks of emotion and gaze perception.

Although this literature constitutes a rich trove of results about vision in autism, it has yet to converge on a set of secure findings. For almost every report of a particular visual skill being impaired in autism, there seems to be another one showing no differences between individuals with autism and typically developing controls.

Even results that one might expect to be consistent across people with autism — such as face perception problems — do not tend to replicate from one study to the next. There could be several reasons for these inconsistencies. The inherent heterogeneity of the autism phenotype no doubt plays a role in driving the disparities in results. Assessment methodologies and subject instructions, for what is technically the same task, also differ from study to study. Perhaps most importantly, the tasks being probed might not be the critical ones most relevant to autism. Due to such factors, the field is in flux and the body of results is mixed.

From the perspective of short-term clinical translation, this is undoubtedly a frustrating state of affairs. Having firm and replicable empirical results is a necessary prerequisite for developing theories of causation, improving diagnostic tests and designing new therapeutic interventions.

However, this very frustration is the strongest motivator for scientists engaged in this area. For each one of us, the challenge of discovering how the world looks when viewed through the eyes of a child with autism helps define our lives as basic scientists and as individuals trusted by children and their caregivers.

Pawan Sinha is professor of vision and computational neuroscience at the Massachusetts Institute of Technology in Cambridge. Anya Leonova is a postdoctoral fellow in his laboratory.