Uta Frith: Why I am obsessed with this cognitive thing 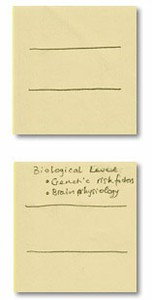 What do we know about autism and its causes? If you have a Post-it note handy, we can start by drawing some lines to create spaces for what we already know and what we don’t.

We’ll reserve the top space for facts about the biological basis of autism. You could list an impressive number of risk factors here, such as susceptibility genes, as well as a mass of data about the brain in autism: differences at the cellular level and differences in the size, activation and connectivity of brain structures, for example.

The space at the bottom is for all the behavioral observations, and performance on neuropsychological or psychometric tests. Behaviors reported by parents or others using standard diagnostic instruments — such as questionnaires or interviews — would be listed here as well. There is a huge amount of data: for recognition of emotion in faces alone, there are more than 40 papers.

The middle space between the two lines is for ideas about what is different about the mind of someone with autism — here is the core of my obsession.

This space describes how the brain sees, understands and acts in the world. The term ‘cognitive’ describes everything that the mind does, and refers to all aspects of mental life. Cognitive is often contrasted with affective, which describes emotion. But what we think and what we feel are two sides of the same coin. 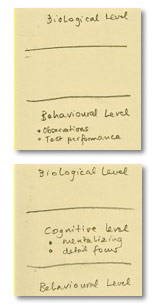 It is exciting to try to pinpoint what is distinctive about these minds. What in the mind or brain makes it difficult for someone with autism to adapt to the social world? I’ve written the term ‘mentalizing’ to refer to one theory: that people with autism have difficulty recognizing what others think and feel. I’ve also added the term ‘detail focus’ to point to another theory: that autism involves attention to parts at the expense of wholes. This could explain what in the brain allows individuals with autism to develop special talents.

Such hypotheses are only useful if they lead to testable predictions and observable findings at the biological and behavioral levels. Data at both these levels only become meaningful if they can be explained in terms of what the mind does. Understanding that a child with autism may be ‘mind-blind’ is far more helpful to a teacher than knowing that he or she has a particular genetic abnormality (biological) or tends not to look at eyes (behavioral)

We also need a space for causes that are outside of the person — let’s call this ‘environment.’

Environment can act at every level of the diagram, hence the arrows. There are plenty of data on environmental effects. Some of these are risk factors, especially at the biological level, but others can have positive effects. For example, teaching can powerfully shape actions and help individuals overcome behavioral problems.

We now have a structure that we can use to lay out what we have already learned about autism. I have drawn lines on Post-it notes, but if you want to insert all the facts that are already known, you will need a very large sheet of paper! 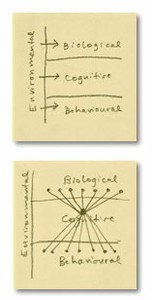 We can also use this simple layout to imagine how our knowledge might expand in the future. The holy grail of autism research is to trace the causes of autism from genes to behavior, to explain what clinicians, parents, teachers and researchers all recognize as autism, and to improve life for people with the disorder.

We know much already, but how can we pull the existing findings together? We need to find a common pathway — the critical part in the system that is always affected, no matter which of the numerous genetic and environmental risk factors has caused the autism.

If we can find a node at the cognitive level, animal models become more informative, for example. This is because one can look beyond behavior, which is obviously very different in mouse and man.

There is a thorny point here: The node would pinpoint both normal and abnormal function. But isn’t this too black and white? Isn’t everyone ‘a bit autistic?’

I happily agree with this at the behavioral level, where one thing always shades into another. A measure of amount of eye contact, for example, will vary continuously across different children — we can only make an artificial cut-off point to define what is ‘abnormal.’ The same goes for the biological level: If you assess neurochemical levels, you will get a continuous distribution, with clinical groups tending to lie at one extreme.

At the cognitive level, however, it is admissible to use categorical distinctions. We are free to theorize that there are functions that the typically developing mind automatically performs, which the mind of a person with autism performs in a qualitatively different way, or not at all — and vice versa. Perhaps this is the case with mind-reading and mind-blindness.

To me there is something very appealing about pulling together the strings in a common pathway. Everyone agrees that autism at the biological and at the behavioral level presents a huge amount of complexity and heterogeneity. This is why some researchers are searching for subgroups.

At the same time, there is a strong clinical impression that autism is something distinctive that can be recognized across different individuals. I think it would be very interesting to investigate what it is that causes this intuition. One possibility is that there is something unique to and ubiquitous in autism — and I believe that this can be found at the cognitive level.

The best lessons I have learned during my career are from parents who have shared their insights and observations with me. They have encouraged me to take a hard look at what precisely might be wrong in the machinery of the mind or brain in people with autism. Sometimes their comments and anecdotes have made me change my mind and redirect my research.

Even at its most theoretical and abstract, my research has been informed by personal experience — sometimes my own, but more often that of the parents and teachers that I have had the good fortune to know. I would recommend, even insist, that researchers interact with the individuals they study as well as their caretakers.

You can tell when you read a paper by an author who has never had any real experience with an individual who has autism. When I read such papers I often think — rather harshly — that the authors don’t know what they are talking about and I would be surprised if they had anything relevant to say in the long run.

So, to young researchers I would say: You can’t listen and observe enough. That’s how you will continue to learn something new and surprising about autism every day.