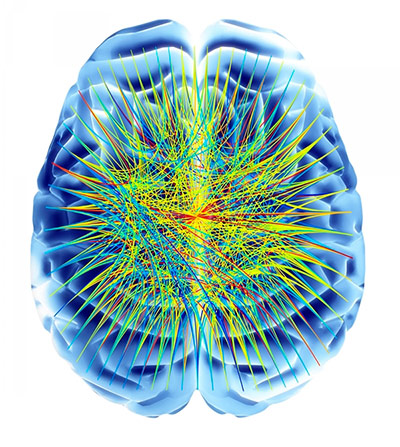 Signal to noise: Too many connections in the autism brain may drown out important signals, much as background noise can make it difficult to hear conversation.

Some individuals with autism have lacunae of cognitive strengths and interests, and also have clear deficits in other areas. The mechanisms underlying this are poorly understood, but have been hypothesized to be at least in part due to disconnections in the central nervous system (CNS)1.

Several studies have supported the notion of a defect in the connections between brain regions. A Viewpoint by Vinod Menon, published in November, pointed out a new twist to this story: There is now evidence for both increased and decreased connectivity between different brain regions.

This raises several intriguing questions, the biggest being: How do hyperconnectivity and hypoconnectivity each affect information processing?

It is easier to imagine the role of hypoconnectivity in impaired brain function. This could lower the amount of information in a circuit’s signals or decrease the connectivity between regions, thereby restricting the brain’s ability to generate higher-order cognitive constructs. In each case, it lowers the brain’s ability to generate appropriate behavioral responses.

However, hyperconnectivity may also impair information processing by increasing the background noise. This would work in much the same way that increasing the number of people having separate conversations in a room drowns out a single complex conversation.

It will be important to understand exactly what hyperconnectivity, as measured by functional magnetic resonance imaging, means for information processing. What’s more, connectivity studies in animal models often examine connectivity from the perspective of individual neurons instead of entire circuits. Methods are needed to better investigate connectivity at the level of circuits.

What types of mechanisms could alter brain connectivity? We are at the very beginning of understanding the cellular and molecular processes that could create circuit dysfunctions. Altered development of the brain’s wiring diagram is the most obvious mechanism. Mutations in genes encoding proteins that regulate the paths of neuronal projections, or axons, and synaptic target choice could alter connectivity. This occurs with mutations of DCC and ROBO3 in humans2.

In rare cases of autism, there are alterations in genes such as CNTNAP2 that may affect neuronal migration, morphology and connectivity3, 4. Indeed, there is evidence for altered CNS connectivity in individuals with abnormal CNTNAP2 alleles5, 6.

Mutations in PTEN are recognized as a strong risk factor for autism with elevated head size, or macrocephaly7. Loss of the PTEN phosphatase (which adds a chemical phosphate to the PTEN protein) in mouse mutants increases the growth of neuronal processes8, and boosts functional connectivity within the auditory cortex9. The phosphatase is needed to repress signaling from several receptor systems, such as those that affect growth factors.

Environmental factors, particularly during development, may also play a role in altered cortical connectivity. For instance, valproic acid exposure during gestation, which is linked to elevated autism risk, is reported to increase hyperconnectivity between neighboring neurons in a neocortical microcircuit10. Thus, future studies of functional connectivity should aim to address the effects of genetic or environmental perturbations on connectivity of individual neurons, local circuits and distributed circuits.

Altered connectivity could also potentially arise due an alteration in circuit physiology, such as reduced cortical inhibition. This initially could elevate cortical excitation. Reduced inhibition could arise in many ways, such as lower numbers or decreased function of cortical interneurons.

For instance, mice lacking the DLX1 transcription factor have fewer interneurons at synapses, or neuronal junctions, in the cortex and hippocampus than controls do11. More recently, these mutant mice have been shown to have less strength in functional connectivity in their auditory cortex12.

The mechanism underlying this observation is uncertain, but may reflect a secondary compensatory decrease in excitation, in response to the primary defect in cortical inhibition.

Likewise in DLX1 mutant mice, compensatory effects are observed in hippocampal CA1 pyramidal neurons. These neurons are less active because they withdraw glutamate receptors from some of their excitatory synapses and because they alter their membrane properties to decrease excitability13.

Thus, reduced inhibition due to interneuron loss apparently leads to a homeostatic reduction in excitation, which could lead to a more distributed reduction of functional connectivity.

Autism undoubtedly is the result of a constellation of diverse mechanisms. Still, compensatory mechanisms may lead to common end phenotypes, which may include a propensity for increased connectivity of certain circuits (perhaps developmentally more primitive ones) and reduced connectivity of later-forming circuits.

John Rubenstein is professor of psychiatry at the University of California, San Francisco. Vikaas Sohal is assistant professor in residence of psychiatry.