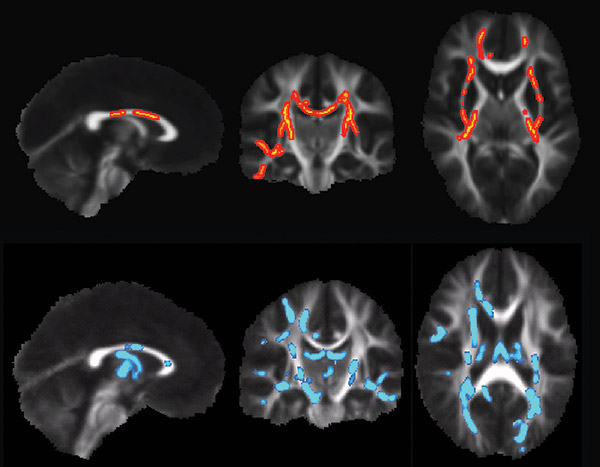 Polar opposite: People with a deletion of the autism-linked region 16p11.2 (top) have stronger neuronal connections (red) than controls do, whereas those with a duplication of the region (bottom) show the opposite pattern (blue).

One way to imagine the brain is as a computer with a large number of processing units, each specialized for a particular task. In this analogy, the brain’s gray matter — which consists of neurons’ cell bodies and their points of contact with other neurons — represents the processors. White matter, which is made up of neurons’ long projections, or axons, represents the wires that connect the network.

However, it is equally important to assess the properties of white matter. These studies can tell researchers how strong the connections are between brain regions and whether the neuronal tracts that support these connections show signs of injury or abnormal development.

Each measured pixel of a dwMRI image contains on the order of 50,000 axons. The ability to noninvasively scan individual axons — which are about 0.001 millimeters in diameter — is not yet possible. Butwe can extrapolate features of white matter structure from dwMRI measurements. Typically, we do this by looking at fractional anisotropy (FA), a measure of the directionality of water diffusion.

Water tends to flow more easily along tracts of white matter than if it goes perpendicular to the axons. This is because in the latter scenario, it may bang up against other structural elements such as the axon membranes and layers of insulation, called myelin. Along the direction of the axons, water faces no such barriers.

For example, highly parallel axons have high FA values, whereas less parallel axons have low FA (see inset). However, it’s not yet possible to distinguish the different scenarios that could give rise to altered FA measurements, including the presence of crossing axons, rather than parallel or dense ones.

Although we cannot directly relate FA to distinct features of white matter, FA measures are nevertheless a useful indicator of white matter’s structure. For instance, FA increases up to age 30 and then starts decreasing after 401. Studies have shown that people with low FA measurements struggle with cognitive tasks such as navigating a maze2 and have low intelligence quotients (IQ)3.

FA can be a sensitive biomarker for conditions ranging from traumatic brain injury to autism4, 5. However, studies have not found any consistent abnormalities in FA in people with autism6. This may be because of the heterogeneity of the disorder: Autism results from many different originating causes and individuals with the disorder can have deficits in many different aspects, including social, emotional, language, sensory and motor skills.

To add to the complexity, FA has been found to be higher or lower in people with autism than in controls, depending on the study.

For example, many studies show low FA levels in people with autism, but someteams have reported elevated FA in children with autism younger than 4 years of age7, 8, 9 and in adolescents with the disorder10. Researchers have described this same disparity in results from fMRI studies of functional connectivity in people with autism.

Cataloging the features of individuals who have the same genetic lesion may lessen some of the heterogeneity. For example, FA is thought to be elevated in people with a deletion of the autism-linked 16p11.2 chromosomal region12 and low in those with a duplication of the region11, 12. 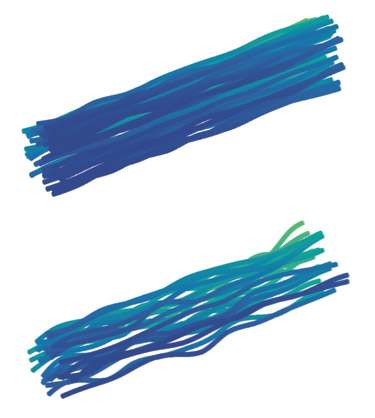 Straight lines: The organized and parallel tracts of neurons on the top would yield higher measures of connectivity than the disorganized tracts on the bottom.

In either case, the affected regions of white matter are widespread across the brain and do not localize to areas with specialized functions. It is fascinating, and perhaps a bit perplexing, that variation in the same chromosomal region can lead to either an increase or a decrease in FA. This suggests that significant deviations from normal can lead to neurological impairments, no matter the direction: The stronger the deviation, the worse the impairment.

For example, in a study published in April, we found an association between higher axial diffusivity (a metric that correlates with highFA) and low IQ in people with the 16p11.2 deletion12.

As we mentioned above, FA is only an indirect measure of white matter and does not directly predict changes in neurons. To address this shortcoming, researchers are developing biophysical models of white matter that require advanced MRI hardware and techniques. For example, a technique called neurite orientation dispersion and density imaging quantifies the density of the axons and how parallel the white matter is13.

Using this method, we have found that people with a 16p11.2 deletion have lower measures of axon density than controls do, whereas those with a duplication show the opposite trend.

This result suggests a biophysical explanation for the opposing changes in FA seen in people with deletion or duplication of 16p11.2. Researchers can adapt clinical MRIs to include advanced measures of white matter. This would allow them to better relate changes in white matter to properties of the underlying neurons.

In the grand scheme of things, most of what we know about the brain comes from studying individual neurons or up to hundreds of them. Connecting brain imaging measurements to this wealth of cellular neuroscience knowledge will enable better understanding of disorders such as autism.

Pratik Mukherjee is professor of radiology and bioengineering at the University of California, San Francisco. Julia Owen is a postdoctoral scholar in his laboratory.