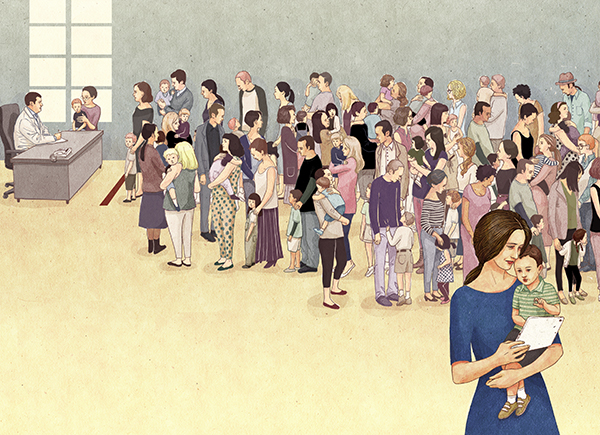 Julia Yellow Waiting list: Over the next five years, as many as 5 million children may seek an autism diagnosis, requiring 4 million work hours a year for clinicians.

In the past two decades, autism’s prevalence has increased by more than 600 percent. Although autism manifests early in development, the average age of diagnosis in the U.S. continues to hover stubbornly above 4 years. Unless families can pay out of pocket for specialty programs, they must wait for a diagnosis before launching into therapy.

By the time they get there, their child has lost opportunities for intervention that might have had huge long-term benefits. With the rate of autism now at 1 in 68 people and climbing — the result of changes in diagnosis, greater awareness, increasing parental age and, really, anyone’s guess — the need for solutions that reach the risk population more quickly and effectively has never been more real.

For most families, the diagnostic odyssey of autism has more stops and starts than the 16 Odysseus endured, with two main stops: the initial detection of risk and its clinical confirmation.

The path to each is long. The first path is not standardized and often rests on the family’s shoulders. The second has more structure, but the process is long and cumbersome, making it difficult to scale it to address the global need. Worse, these two steps are generally decoupled in today’s healthcare system.

As the prevalence rate climbs to 2 percent, autism in the U.S. could increase by as many as 5 million individuals within the next five years. This translates to about 1 million children a year, each requiring, conservatively, about 4 hours of clinical attention to reach the official diagnosis. This is roughly 4 million clinical hours in total, which breaks down to about 1,400 years’ worth of eight-hour workdays.

There are approximately 5 developmental pediatricians for every 10,000 children at risk for a diagnosis of autism. Just by simple back-of-the-napkin calculations, it is clear that the system is set up to fail families: The risk population sharply outnumbers the clinicians available to administer the standard of care.

With this kind of math, we might even be happily surprised to learn that the average wait time to receive the official clinical evaluation is about 13 months. But without new approaches, this timeframe will increase and the waiting lists will continue to grow. The time to reach a diagnosis — which in many cases activates therapy — will also continue to climb.

Just by simple back-of-the-napkin calculations, it is clear that the system is set up to fail families.

To help clear thefirst stop in the diagnostic odyssey, leaders in the field have rightfully stressed that all children should be screened for autism at routine 18- and 24-month well checkups. Researchers have developed many valuable tools for early screens of risk. These include, among others, the Social Communication Questionnaire and the new version of the Modified Checklist for Autism in Toddlers (M-CHAT).4

All have merits, but despite endorsement of the M-CHAT by the American Academy of Pediatrics, the adoption rate in general pediatric care remains limited. One reason for this has been low accuracy and, in particular, low specificity — meaning that these questionnaires often cannot distinguish autism from other developmental disorders.

That is changing. The latest version of the M-CHAT shows great promise for rapid risk detection with increased accuracy. It also shows promise for direct-to-parent use that can be done prior toand outside of clinical visits.

We have the similar goal of shortening the time children wait for screening, as well as the length of the screen itself, in part by putting tools into parents’ hands. To do this, we have used data-driven approaches to develop numerical classifiers that work with a small number of behaviors and that, based on the data used to date, appear to have high accuracy for detecting autism risk1,2.

More testing is underway, but these parent-directed approaches appear to have both high sensitivity and specificity. A key part of our work involves testing the possible use of home videos to enable machine-learning quantification of risk based on multiple raters’ observations.

Short screens based on parent reports alone are likely to continue to yield false positives, but combining parent reports with a clinician’s observation of the child may not have the same issues.

The ADOS has become the de facto standard for aiding diagnosis for an extremely good reason. It involves direct interaction with the child, which is vital to understanding risk. However, because the ADOS must be administered by clinicians at clinics, its use simply cannot be scaled to the size of the risk population.

For these reasons, we think it is important to explore the potential of parent-directed methods that include a home video observation of the child. We conducted a study that shows that a quick look at short home videos may be a feasible method to screen for autism3.

The purpose of examining YouTube videos was not to test their potential for diagnosis, but rather to simply test whether trained raters can detect the behaviors targeted by the ADOS in these videos.

A secondary but important purpose was to determine whether multiple assessments of the same video could be done in a timely and economical way. We also ensured that ratings agreed and thereby provided statistical support for a risk calculation and an internal quality control to safeguard against accidental misclassification.

Gathering this information online through a virtual workforce of trained raters is tantalizing in part because it can be scaled to large numbers of participants.It also broadens the reach of natural observation of the child — a part of the process that is valuable yet limited in practical application today.

We have tested our own direct-to-parent approach on data from several thousand children at risk for autism and found high sensitivity and specificity. A plus to our approach is that it uses computational approaches that can calculate theprobability of risk, which can be retrained with new data to adapt and maintain accuracy. However, by nature of the algorithms, we expect it will remain short and simple enough to be managed by families outside of clinics.

We certainly understand some of the concern expressed from the clinical community that the information yielded, even if it were completely accurate, could be inappropriately used without clinician involvement. We of course believe that appropriate clinical processes should be inserted to best use and manage this type of information.

Improving autism screening tools is one goal, but we need to focus at the same time on adoption. Screeners primarily face challenges with standardized adoption because of issues with access and ease of use.

Mobile tools can help. Approximately 1.75 billion people worldwide have a smartphone with video and the ability to run applications. Millions of people from increasingly socioeconomically diverse backgrounds are embracing the mobile health revolution.

This revolution is apparent in Doctor on Demand, Omada Health, Basis, FitBit, Google Glass and Sproutling — technologies, devices and wearables that are meteorically restructuring how people manage their health.

The mobile health market is projected to reach $49.1 billion in 2020. These tools have unparalleled potential to improve patient engagement and care at substantially reduced costs. The positive results so far on moving the practice of screening into parents’ hands suggest that a direct-to-parent mobile health solution is possible. This could reach the booming population of children at risk for developmental delay and autism.

Such an app would also enable structured, consistent and straightforward screening. And tethering it to secure cloud storage would provide a fully mobile way to save the results. For example, it could include a risk profile and breakdown of behaviors from a questionnaire coupled with scored, short home videos of the child.

This would give parents personally controlled records that they store privately. They could also safely share the record with clinicians who could then examine it in the context of other records.

Importantly, mobile health tools can be used repeatedly. This also opens up the potential for tracking progress during therapy. With this we could — relatively quickly and cheaply — have the ‘big data’ necessary to create powerful predictors and much more.

Giving families a way to communicate a standard outcome to their physician could have considerable impact on arriving at the first stop on the diagnostic odyssey — the detection of risk — earlier and more systematically than is possible today.

Yet, in order to reach the second stop and achieve a meaningful reduction in the average age of diagnosis, we must build a better bridge between families and clinicians.

Forming the bridge requires at least three pieces. First, the clinicians must be able to get the results from these direct-to-parent screens. Studies suggest that families and doctors are willing to share information using mobile technology: 69 percent of U.S. adults are willing to communicate with providers by email, and as much as 40 percent are willing to do so using mobile health applications; 84 percent of doctors use tablets and increasing numbers of families are bringing their health information to their doctors through innovative programs such as Blue Button.

Second, clinicians must understand the trade-offs of the risk screen. Even if the screen provides only a general idea of risk, this may be enough to give them a set of clearly structured next steps.

Finally, the bridge requires that clinicians know how to use these data. A focus of our work has been to move toward quantitative scales of risk — probabilities or digital phenotypes that have more information than a simple yes or no. These gradients could give clinicians a more precise way to react — for example by triaging certain children off waiting lists.

We are not suggesting that we remove human and clinical interaction from the process of autism diagnosis. But the earlier and faster that parents are able to move to the therapeutic starting line, the sooner they can begin to engage in activities that equip them and their child with invaluable skills to thrive — and the sooner we can shift our collective focus and our funding to innovative therapies that can reach remote populations.