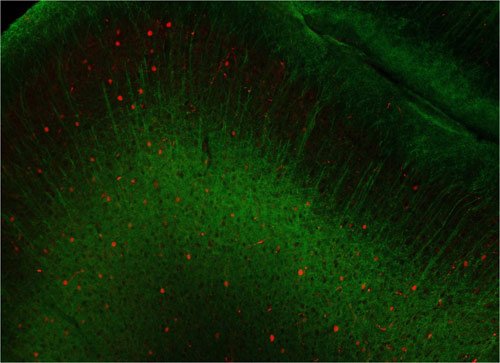 Brain map: In the mouse prefrontal cortex, neurons that activate signals (green) form circuits with those that inhibit signals (red).

It is an incredibly exciting time for autism research. Sophisticated studies of behavior and cognition have advanced our clinical understanding of autism well beyond the criteria of the Diagnostic and Statistical Manual of Mental Disorders.

At the same time, structural and functional imaging studies have identified specific brain regions that are atypical in autism. Finally, genetic and epidemiological studies are uncovering more and more factors that raise the risk of the disorder. But how do we translate this information into treatments?

Here, I argue that understanding the function of neuronal circuits, specifically microcircuits in the prefrontal cortex and elsewhere in the brain, will play a major role in translating research findings into new treatments.

Typically, researchers assume that a microcircuit within a particular region is composed of specific cell types. Connectivity within each microcircuit is also assumed to follow a stereotyped pattern, in which cells of a given type receive inputs from similar sources and send outputs to similar targets.

Why should understanding microcircuit function be important for translating discoveries about autism into new treatments?

Simply put, after we identify which genes, pathways, brain regions and environmental exposures are involved in autism, we need to understand exactly how these factors affect behavior. The goal of understanding microcircuit function is to explain how changes in the properties of cells or synapses, the junctions between neurons, lead to changes in the patterns of neuronal activity that generate behavior.

Consider the following three issues that studies of microcircuits should address: First, most cases of autism are likely to have multiple genetic, environmental or developmental causes. As a result, drugs that target specific pathways may have limited efficacy when each pathway makes only a small contribution to the overall risk of autism. However, multiple pathways probably converge at some level, in which their individual effects conspire together to produce autism.

Microcircuits represent a place where multiple types of cells and synapses come together. We hypothesize that they could represent the site for pathological convergence in autism and so treatments that restore typical microcircuit function would target a final common pathway.

Second, even in cases of autism that result from one or a small number of factors, these factors may play a role early in development and produce lasting changes in microcircuit organization and function.

For example, Timothy syndrome, a rare disorder that causes heart defects and autism, is caused by a mutation in the gene encoding a subunit of a calcium ion channel that, among other things, regulates neuronal signaling. A study published last year using neurons derived from the skin cells of individuals with Timothy syndrome found that this mutation may alter neuronal development, changing the relative numbers of neurons that belong to different classes2.

Treatments that target calcium channel dysfunction may be effective during early stages of development, but later in development it may be necessary to also treat the resulting changes in microcircuit structure.

Third, as a practical matter, it would be inefficient to develop distinct treatments that target each individual genetic, molecular or developmental pathway that contributes to autism. Being able to identify any common effects of these pathways on circuit function would allow the development of treatments for cases of autism that result from a variety of causes.

So what are the prospects for finding common modesof microcircuit dysfunction that are relevant to multiple cases of autism?

One region that has attracted interest is the medial prefrontal cortex (mPFC). The prefrontal cortex integrates information from multiple brain regions to enable high-level cognitive functions, such as planning and decision-making. Abnormal integration of such information is thought to be an underlying feature of autism and to correlate with social deficits3,4.

A long-standing hypothesis is that autism involves an excess of signals that activate neuronal circuits relative to those that inhibit them5. I was involved with a study published last summer that tested whether inducing such an excitatory-inhibitory imbalance in the mPFC of mice can reproduce aspects of autism. As predicted, stimulating excitatory (but not inhibitory) neurons in the mPFC using rays of light disrupts social behavior in mice6.

In particular, this optogenetic stimulation is associated with fast brain waves in the gamma frequency range (30-100 Hz), which can also be measured in people, using electroencephalography or magnetoencephalography. Some studies have found similar increases in gamma rhythms in individuals with autism7, although other studies report dampened rhythms8,9.

The optogenetic study certainly raises many questions. For example, does optogenetic stimulation transiently inactivate the mPFC or does it alter its output? Still, the study suggests that changes in the pattern of microcircuit activity in the mPFC, specifically alterations in the excitatory-inhibitory balance or gamma oscillations, represent modes of microcircuit dysfunction that might contribute to autism.

Of course, none of this is meant to imply that therapeutic strategies that target specific genetic, molecular or developmental pathways would not be effective treatments for autism. Rather, it is important to understand how such manipulations ultimately alter microcircuit function as well as how they how they modulate individual pathways.

Measuring the effect of potential therapies on microcircuit function might help us to identify the most effective among many agents that target the same molecular pathway. And looking for ways to manipulate microcircuit function might lead to novel therapeutic strategies that do not act directly on dysfunctional molecular pathways, but act instead on parallel pathways — much as detours provide alternate routes to get around traffic jams.

Translating genetic, anatomical, developmental and epidemiological findings into new treatments for autism is a major challenge. But I believe that decades of research in the basic neurobiology of microcircuits, together with new tools that allow us to identify how specific cell types contribute to microcircuit function10, will make useful and important contributions to this critical endeavor.

Vikaas Sohal is assistant professor in residence of psychiatry at the University of California, San Francisco.