Karen Dobkins
Professor of Psychology, University of California, San Diego
Sign up for
Spectrum's newsletters
Thanks for subscribing! 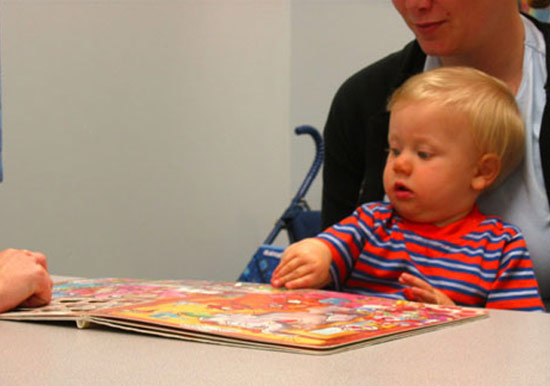 First signs: The siblings of children who have autism are up to 20 times more likely than the general population to have the disorder.

Autism spectrum disorder (ASD) — which includes autistic disorder, Asperger syndrome and pervasive developmental disorder–not otherwise specified — is characterized by deficits in a variety of social, communicative and emotional behaviors and affects about one percent of the population1.

ASD cannot reliably be diagnosed before children reach 2 to 3 years of age, so many researchers are studying the infant siblings of children who have ASD to identify early signs of the disorder2. Studying development in these infants is expected to have enormous impact on the field from a clinical and a basic science standpoint.

Researchers refer to infant siblings of children who have ASD as ‘high-risk’ because their likelihood of developing ASD is up to 20 times higher than in the general population3. This is because the high-risk infants presumably carry some of the genes associated with autism, a theory that is supported by twin4, genetic linkage and association studies5.

Since the first long-term study in 2005 of high-risk infants up to 1 year of age, several laboratories worldwide have tracked the development of high-risk infants, starting as early as 3 months old and following up until they can be reliably tested for ASD, usually at 2 to 3 years6.

The optimal scenario is to find autism-like features that are only present in high-risk infants who go on to develop ASD. In this ideal case, early data could — for any one individual — perfectly predict who would develop ASD and who would not.

Unfortunately, this outcome is highly improbable because there is typically a fair amount of variability within both high-risk infants who develop ASD and those who do not. With rare exception, most studies have fallen short of this ideal.

In one exciting ‘near hit,’ researchers reported that the frequency with which high-risk infants who go on to develop ASD look at faces, share smiles and vocalize with others declines steeply after 6 months of age, whereas these behaviors become more frequent after 6 months in children who do not develop ASD7.

Because most researchers working with high-risk infants are focusing on differences between group averages, and given the variability within each group, the best solution may be to investigate several autism-like features and then use computer algorithms — such as pattern classifier analysis — to identify patterns and predict individual outcomes.

Another possible finding in these studies is that the severity of early atypicalities may be the same between high-risk infants who develop ASD and those who do not. There are several explanations for what could lead to ASD if this scenario were the case: possessing a critical number of different autism-like features — which might be considered akin to possessing a critical level of genetic load — exposure to an unknown environmental trigger, such as diet; the absence of an unknown protective factor, such as hormone levels or epigenetics; or an inability to behaviorally compensate for the atypicality, which could be tied to whether or not an infant receives early behavioral intervention.

Researchers working with high-risk infants acknowledge that it will be very important to conduct studies that distinguish among these possibilities. Many researchers have already begun collecting the relevant information — for example, reports of environmental history or blood samples for genetic screening.

A second, equally important, approach is to compare early data between high-risk infants who do not develop ASD and low-risk control infants, who do not have a family history of the disorder. Most unaffected high-risk infants still carry some of the genes associated with ASD and so are likely to possess some autism-like features.

Tests for simple abilities in these high-risk infants could reveal genetically mediated features, called endophenotypes, that run in families with ASD. These endophenotypes could increase risk for developing the disorder8. For example, language delay is often present in both children with ASD and their unaffected siblings. The advantage of exploring endophenotypes is that they could be a simpler marker than the full autism diagnosis and lie closer to the basic mechanisms underlying the disorder.

In support of this, several studies have revealed atypical results in simple visual tasks among high-risk siblings. For example, our group has found that sensitivity to light-and-dark visual patterns is enhanced in high-risk infants at 6 months of age compared with low-risk controls9. The brains of high-risk infants also respond differently than those of low-risk controls to pictures of faces than of objects, as measured by electroencephalography10. Another research group has shown that brains of high-risk infants also respond differently to pictures of individuals looking away from the camera as opposed to those gazing into the camera11.

These visual results raise a rather provocative hypothesis: Although classically defined by behavioral impairments, ASD may arise from early abnormalities in visual sensory processing. Areas of the brain involved in visual processing, such as face processing, develop earlier than, and project to, brain areas responsible for more complex cognitive functions. It is quite possible that development of earlier areas sets the stage for later-developing areas. Abnormalities in early sensory areas could lead to downstream consequences in the brain areas responsible for higher-level cognition, social-emotion, and language processing, capacities known to be impaired in ASD.

Although testing for ten endophenoypes for each individual might seem daunting, this goal could be accomplished in the near future with short tests for the different endophenotypes.

In sum, finding atypicalities and endophenotypes in high-risk infants is expected to lead to important insights into what goes wrong in the earliest stages of ASD. From a clinical standpoint, being able to predict early in life which infants are more likely to end up developing the disorder will lead to earlier interventions, which have been shown to improve long-term outcome12.

From a basic science standpoint, revealing endophenotypes in high-risk infants will surely help elucidate the underlying basis of ASD by highlighting the individual mechanisms that contribute to the disorder.

On a final note, in the past decade, there has been a plethora of perceptual and neural studies conducted in children and adults with ASD. These studies suggest that children with autism show pervasive atypicalities in everything from sensory abilities to cognition, social behavior and language processing. Perhaps the most critical impact of the high-risk infant approach is that it has the potential to ‘catch the culprits’ as they appear during development. After all, autism is a developmental disorder.

Karen Dobkins is professor of psychology at the University of California, San Diego.