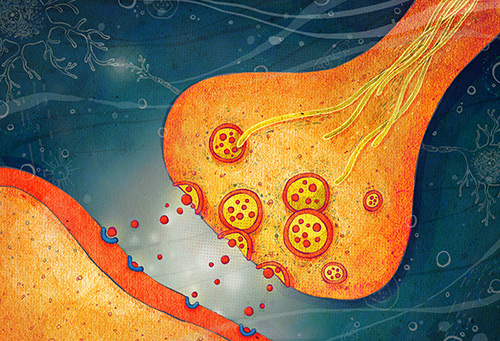 Julia Yellow Sending signals: A breakdown in the pathways by which the brain adapts to new experiences may be a common feature of autism, schizophrenia and intellectual disability.

Neurological disorders such as Alzheimer’s and Parkinson’s diseases are often characterized by symptoms linked to changes in the central nervous system. Historically, understanding the cellular hallmarks of these disorders has been a major driving force of research within this field and has led to novel therapeutic targets.

By contrast, psychiatric disorders such as autism spectrum disorders, intellectual disability and schizophrenia are characterized based on behavior and are much more difficult to characterize, both in terms of their genetics and physiology. As a result, diagnosis of these disorders is still largely dependent on clinical symptoms alone.

The lack of understanding of the underlying neurobiology of these disorders has made identifying effective long-term treatments difficult. Despite these difficulties, emerging evidence from large-scale genomic analyses has revealed potential overlaps in the genetics of autism, schizophrenia and intellectual disability1, 2. Interestingly, but in retrospect perhaps unsurprisingly, these disorders each have mutations that disrupt the sites of neuronal communication, or synapses.

For example, people with schizophrenia have been found to carry mutations in complexes involved in learning and the regulation of neurons in response to experience. The cellular processes that mediate these changes are called synaptic plasticity and in particular two forms — long-term potentiation (LTP) and depression (LTD) — are thought to underlie learning and memory3. The proteins involved in these processes that are affected in schizophrenia and autism include PSD-95, calcium channels and ARC.

ARC, which stands for activity-regulated cytoskeleton-associated protein, is of particular note because its synthesis is regulated by FMRP, the protein that is missing in people with fragile X syndrome — an autism-related disorder and the leading cause of inherited intellectual disability in children4. FMRP’s other targets are also likely to be mutated in people with schizophrenia.

Taken together, these findings suggest that fragile X syndrome, autism and schizophrenia may in fact share similar underlying mechanisms. For example, ARC regulates a process called endocytosis that brings materials, such as receptors or membrane components, into the cell. ARC does this in a highly specific and regulated manner5.

When ARC is disrupted, as in fragile X syndrome, endocytosis is also perturbed. This in turn interferes with LTD and LTP, preventing neurons from properly encoding new behavior and learning. These cellular changes are thought to contribute to the cognitive dysfunction in fragile X syndrome.

Indeed, mice that lack ARC exhibit a profound defect in storing memories, little long-term plasticity and are unable to transduce experience into long-lasting changes in the brain6.

“The disorders that we describe as autism and schizophrenia are each the result of specific, and overlapping, combinations of mutations.”

If the same processes are also disrupted in schizophrenia, it suggests that the disorders that we describe as autism and schizophrenia are each the result of specific, and overlapping, combinations of mutations. ARC-mediated endocytosis may be disrupted in both disorders and lead to autism, schizophrenia or intellectual disability only when combined with certain other factors.

Other research has lent credence to the notion that these psychiatric disorders exist on a genetic spectrum, by showing that anomalies that lead to schizophrenia or autism are present as early as during fetal development7. In the case of autism, analysis of fetal brain tissue shows rampant disorganization or ‘miswiring’ of the cortex7.

The proper wiring of neural circuits during development depends on the ability of cells to change the strength of their circuits in response to experience, which is dependent on ARC. This suggests that perturbations in ARC function may also be present during early developmental stages.

For example, ARC is required for the plasticity observed in the visual cortex when visual input is modified8. When one eye is closed for a number of days, the brain compensates by turning down the magnitude of its response to the closed eye and increasing its responses to the open eye. Mice lacking ARC do not experience these changes, referred to as ‘ocular dominance plasticity.’

ARC expression is exquisitely regulated by experience and neuronal activity5. Many synaptic proteins are tightly regulated: Too much or too little protein at the wrong time is detrimental for normal synaptic function.

Indeed, misregulation of ARC expression has been implicated in other neurodevelopmental disorders: for example, in Angelman Syndrome — in which ARC is not degraded in a timely fashion9 — and in tuberous sclerosis complex, in which cells make too little ARC10. Both these syndromes, like fragile X syndrome, share overlapping behavioral symptoms with autism and intellectual disability.

ARC acts as a bridge between experience and the gene programs that regulate long-term information encoding. If the same processes are also disrupted in other psychiatric disorders, such as autism and schizophrenia, it suggests that disease manifestation is probably due to specific combinations of multiple mutations in an individual’s genome and the environmental context that individual is exposed to.

In total, the emerging picture is that disturbances in subsets of genes that are responsible for learning and memory, including ARC, interact in myriad ways to lead to schizophrenia and autism. Understanding the functional deficits associated with ARC and other synaptic proteins could provide not only valuable insight into potential treatments, but also an understanding of how the brain encodes new experiences.

Jason Shepherd is assistant professor of neurobiology and anatomy at the University of Utah School of Medicine in Salt Lake City.