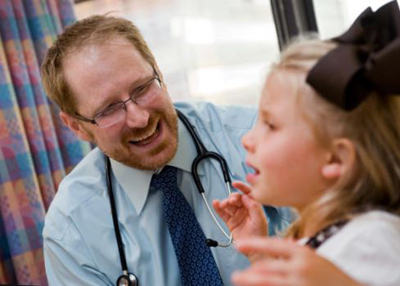 A. Kramer, Texas Children’s HospitalDelayed onset: Jeffrey Neul studies Rett syndrome, which is characterized by a loss of language and motor ability around 1 year of age.

There seem to be two broad patterns of disease progression in autism. Many individuals with the disorder show features within the first year of life, with gradually developing impairments in social and language development1, 2.

However, a significant minority displays another distinct course, marked by loss of previously acquired skills around age 1 or 2, notably in language and social interaction. The prevalence of this ‘regressive’ form of autism is not known, ranging from 12 to 50 percent of people with autism. (A meta-analysis published this year found the prevalence of regression in autism to be 32.1 percent3.) Part of the reason for this wide range is differences in the way these studies define regression in autism.

Regression is better understood in Rett syndrome — a neurodevelopmental disorder that resembles autism — in which regression is a defining feature4. The syndrome predominantly affects girls, who appear to have normal motor, cognitive and social development until 6 months of age. These girls may show some developmental delay, but then at 1 or 2 years of age they undergo a severe developmental regression and lose the ability to speak and use their hands.

Intriguingly, regression in Rett syndrome occurs at the same time as in regressive autism, and includes many of the same features,suggesting a common biological process.

A fundamental question is: What is the biological basis of regression in autism? Loss of skills is seen in only a handful of other disorders. In some situations, loss of previously acquired skills is the first indication of a progressive, relentless disease process, as in some forms of childhood neurodegeneration, such as Batten disease.

However, the overall course in these conditions is distinct from that seen in regressive autism. In most neurodegenerative disorders, skills are progressively and continuously lost. In contrast, regression in autism occurs over a defined time period. Skills may ultimately stabilize and, potentially, be partially or even fully restored. Some studies have indicated that the presence of regression in autism correlates with poor social, intellectual and language function later in life. However, other reports did not find this relationship.

A small number of other disorders, such as childhood disintegrative disorder (CDD), do show the time-delimited regression seen in some cases of autism. There are many similarities between CDD and autism, with the notable distinction that the onset of symptoms and regression in CDD is seen later (older than 3 years) than in autism.

In the case of Rett syndrome,girls undergoing regression may have diminished eye contact and become socially withdrawn, indifferent to their surroundings and irritable. They have difficulty walking or lose the ability entirely, and display relentless, repetitive hand movements.

After this regression, they enter a period of developmental stabilization. During this time, they no longer lose skills and may show some improvement in hand skills and language, although most affected girls remain markedly impaired in these domains.

In contrast, social skills, especially gaze, dramatically improve after the regression period,and most girls with the syndrome show intense eye contact and use their gaze to communicate. Even so, they continue to show abnormal social behavior throughout life5, and more mildly affected individuals show distinct features of autism6.

What can Rett syndrome tell us about regression in autism? In both disorders, loss of spoken language and social skills are the key features. Also, the vast majority (95 percent) of Rett syndrome cases are caused by mutations in a single gene, MeCP2, which encodes a protein that regulates the expression of other genes.

Researchers can identify people who have MeCP2 mutations at a young age and then characterize clinical, physiological and molecular changes that occur during regression. For example, researchers could look at molecular changes in gene expression or metabolites in the blood, or at neuronal activity with electroencephalography or functional magnetic resonance imaging, as children undergo regression.

Understanding the genetic basis for Rett syndrome provides other distinct advantages. First, we know the underlying etiology of the clinical condition in essentially all affected individuals. Second, we can use the genetic information to create animal models, which can help us understand the disease process and allow testing of potential therapeutics.

Animal models of Rett syndrome show many, if not all, of the clinical problems seen in people with this disorder. We have used these models to understand the function of the gene and the effect of its loss on the nervous system.

We can also use animal models of Rett syndrome to understand molecular, cellular and circuit-level changes that occur during regression.

However, demonstrating that regression occurs in the animal model has been a challenge. The major regression that occurs in Rett syndrome is loss of hand skills and loss of language, neither of which are present in the same way in rodents.

One approach is to look at other clinical features present both in people and in the animal model. My lab has focused one such feature: breathing abnormalities.

We recently determined that breathing in Rett syndrome mouse models is normal early in life, but becomes abnormal over time. Rett syndrome model mice breathe at a faster rate and hold their breaths more than controls, and have an abnormal breathing response to a low-oxygen environment7.

By focusing on the neural circuit controlling breathing and looking at changes that occur in its cells and connections, we hope to understand the molecular, cellular and circuit-level problems that lead to loss of correct breath control.

Another way to expand our understanding of regression is to use animal models to explore molecular, cellular and circuit-level changes that occur both as the disorder progresses and in the face of regression. We hope that the insights we gain from this particular circuit will shed light on the circuit-level dysfunction underlying regression in Rett syndrome and potentially in autism.

One of the most exciting findings that has emerged in Rett syndrome is that the disease is reversible in mice8. Restoring MeCP2function reverses the disease process, even in sick animals. This has provided great hope that researchers can develop similar treatments for both Rett syndrome and other neurodevelopmental disorders in people.

In fact, researchers have used these animal models to determine that treatments that modulate brain-derived neurotrophic factor can treat Rett syndrome in mice. Also, a tripeptide derived from insulin-like growth factor-1 has been shown to alter the course of the disease in animals9. This finding has lead to two clinical trials in Rett syndrome and one in Phelan-McDermid syndrome, an autism-related genetic syndrome.

Ultimately, detailed characterization of genetically defined disorders such as Rett syndrome, which have excellent animal models, is likely to provide insight into many of the biological processes involved in related neurodevelopmental disorders such as autism. This is especially true with regard to regression, as this is a feature shared by Rett syndrome and autism, but found in few other disorders.

Jeffrey Neul is associate professor of molecular and human genetics at the Baylor College of Medicine in Houston, Texas.