Promises and limitations of mouse models of autism 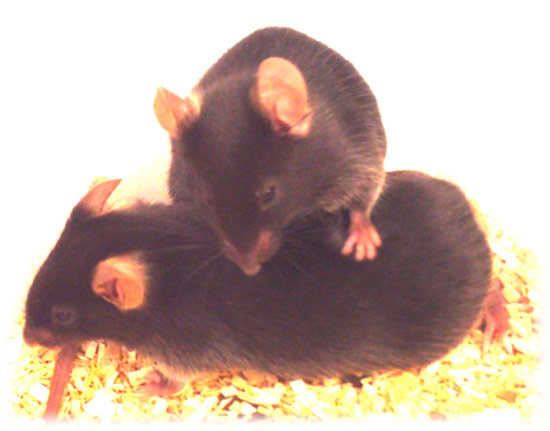 M. Yang Meet and greet: Social mice interact by sniffing each other, a behavior that is less common in mouse models of autism.

There are many hypotheses about what causes autism: genes, chromosomal deletions and duplications, epigenetic factors, neuroanatomical abnormalities, mitochondrial defects, immune dysfunction, advanced parental age and prenatal exposure to drugs and environmental toxins, among others.

A good animal model satisfies three fundamental criteria. The first, called face validity, requires sufficient similarities between the phenotype of the mice and symptoms of the human disorder. The second, called construct validity, is achieved if the biological cause of the human disease is replicated in the mouse — for example, when an autism-associated gene is mutated in mice. Finally, a mouse model has predictive validity if treatments improve both the human symptoms of the disorder and the mouse phenotype.

Diagnosis of autism is purely behavioral and requires clearly defined symptoms in each of three core categories: abnormal social interactions, impaired communication and repetitive behavior. One of the challenges in studying mouse models is determining which behaviors from the mouse repertoire could be considered analogous to these symptoms.

Our Laboratory of Behavioral Neuroscience at the National Institute of Mental Health has been fortunate to interact with clinical experts in the diagnosis of autism to design mouse behavioral assays that reveal such phenotypes. These methods include new equipment and in-depth scoring methods to document a series of mouse behaviors. For example, we assay social interaction by scoring the interactive behaviors of two freely moving mice, including sniffing, following, and grooming each other.

We assay communication by measuring the number and characteristics of ultrasonic vocalizations in social settings and time spent sniffing olfactory pheromones, which are the primary mode of social communication in mice. Finally, we score spontaneous repetitive behaviors such as stereotyped jumping and very long bouts of repetitive self-grooming.

Researchers have identified many candidate genes associated with autism, often from just a few individuals. Mutating one or both copies of these genes in mice is a traditional experimental approach for evaluating their importance. Several research teams have already constructed genetic mouse models for various single gene mutations associated with autism, and for neurodevelopmental disorders in which autism is frequently diagnosed.

Our group and others have used behavioral assays to identify autism-relevant behaviors in mice with mutations in genes that play a role in brain development or social behaviors, and genes that encode components of neurotransmitters or synapses, the junctions between neurons. Some teams have also made mouse models for duplications at chromosomal loci, including 15q11-13 and 16p11.2, and genes underlying related neurodevelopmental disorders, such as fragile X syndrome, Smith-Lemli-Opitz syndrome, tuberous sclerosis and Timothy syndrome1.

We and our collaborators look at the behavioral outcomes of mutations alongside electrophysiological, neurochemical and neuroanatomical findings to obtain a full picture of the consequences of the genetic mutation.

Several inbred strains of mice, including BALB/cJ, C58/J and BTBR T+tf/J are not social. They also show differences in their vocalizations, or show stereotyped behaviors. We and others have shown that BTBR T+tf/J mice in particular have robust deficits in multiple social behavior assays, low scores on olfactory and vocalization modes of social communication, and repetitive self-grooming.

Discovering the genes underlying autism-relevant behavioral traits in inbred strains of mice represents one strategy to identify new genes that could be responsible for autism-like behaviors. This approach is analogous to the search for genes responsible for human diseases.

Inbred strains have some advantages over targeted gene mutations, including the fact that they are available commercially and that it is easy to breed large numbers of genetically identical individuals. The large numbers allow researchers to use inbred strains as the first step in discovering pharmacological treatments for autism spectrum disorders by screening for compounds that improve their autism-related symptoms.

Of course there are many limitations and caveats in designing mouse models. The most important one is that mice cannot replicate all of the uniquely human components of a complex disorder like autism. For this reason, we consider the term ‘autistic mouse’ to be highly inaccurate, and we scrupulously avoid it.

Second, interpretation of mouse phenotypes must be rigorous. Although seizures, anxiety, unusual sensitivity to sensory stimuli, hypoactivity, gastrointestinal problems and sleep disruption may be common in autism, none of these are ubiquitious and are therefore not part of the diagnostic criteria. Reports of these phenotypes are not sufficient justification in and of themselves to conclude that a mouse model displays autism-like behaviors.

The methods used must also be rigorous. Investigators need training in the established behavioral tests to ensure that they are conducted correctly — as is true for any scientific assay. Standard controls are essential. The correct control for mice with gene mutations is their own littermates that do not have the mutation. Evaluation of their general health and physical dysfunctions is also necessary to avoid false positives. For example, a researcher might draw conclusions about low sociability when in fact the mouse doesn’t have a good sense of smell and so cannot detect the presence of a novel mouse.

Finally, replication is essential. As described in an insightful article in the 13 December issue of The New Yorker2, scientific research is fraught with findings that appear in the first experiment, are published in high-profile journals because of their exciting implications, and then cannot be replicated. This phenomenon is, unfortunately, especially prevalent in publications of behavioral phenotypes of mouse models of human disorders. Repeating each experiment in two groups of mice before publishing is a reasonable strategy to avoid raising false hopes.

Many mouse models of autism with pristine construct validity — genetic similarity to people with autism — do not have phenotypes relevant to any of the three diagnostic symptoms of autism. What can we learn from these failures?

Two conclusions are obvious. One is that our phenotyping assays are not sufficiently sensitive to detect behavioral outcomes that most closely align with the behavioral features of autism. More assay development is clearly needed.

The other possibility is that the original hypothesis is disproven: the candidate gene may not be central to the causes of autism. At this stage in the effort to discover the genes that contribute most strongly to the defining features of autism, ruling out is as important as ruling in.

Jacqueline Crawley is chief of behavioral neuroscience at the National Institute of Mental Health.