Promise and pitfalls of induced stem cells for autism 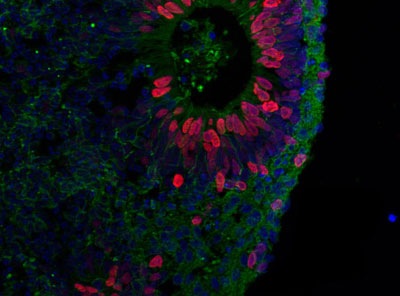 There has never been a greater urgency than there is now to develop strategies that help us understand the link between genes, their expression and the symptoms ofhuman brain disorders.

Animal models are a great resource for understanding the fundamental mechanisms of neural development and neural systems. But the majority of these models only partially recapitulate human diseases and are relatively poor models of the human brain.

Increasingly sophisticated cellular and behavioral analyses of animal models have made us more aware of their limitations and of the necessity to compare them systematically with their human counterparts. But for neuropsychiatric disorders such as autism, our main source of human data is postmortem brain samples, which are limited by their availability and their quality.

The advent of human induced pluripotent stem (iPS) cells, which allow researchers to ultimately transform any cell into a neuron, has opened a new avenue for the study of complex neuropsychiatric disorders, including autism.

In principle, iPS cells can be derived from cells anywhere in the body, and maintain the individual’s unique genetic background. This is important, as complex diseases are caused by mutations in multiple genes, which would be reflected in the iPS model.

Although it is tempting to consider human iPS cells as ‘new patients’ for treating diseases in a dish1, this is probably not the most immediate use for iPS cells. It is worth remembering that we are still in the dark concerning fundamental aspects of neurodevelopment, such as how cell fates are established and how neurons connect and are subsequently pruned, particularly in the human developing brain.

For iPS cells to reach their full potential for studying disorders such as autism, researchers must first address several challenges.

One of the biggest issues is the variability between iPS cell lines. For example, although in principle iPS cells are in a fully undifferentiated state, different iPS lines from the same individual may vary in their ability to differentiate into neurons and in the type of neurons they generate.

The extent of somatic single nucleotide polymorphisms, or alterations in single nucleotides, in the DNA of iPS cells is unknown. However, the decreasing costs of deep sequencing will allow researchers to examine DNA variation and gene expression profiles in iPS cell lines comprehensively and at high resolution. They will be able to do this before banking the lines and making them available to the field.

There are likely to be other reasons for variability in neuronal potential among iPS cell lines. For example, the differentiation protocol that researchers use poorly mimics the natural process of development. Implementing a differentiation protocol that allows for the cell’s own regulatory mechanisms— which confer robustness to the system during typical development — may help avoid some variability.

For example, there are feedback and feedforward mechanisms that stop cells from dividing indefinitely and start neuronal differentiation at the appropriate stage of development. Other mechanisms change the fate of progenitors from neuronal to glial after a certain number of cell division cycles.

Researchers have developed several different ways to differentiate human iPS cells into the subtypes of neurons that are affected in a particular brain disease. These include monolayers, which are single layers of cells on the bottom of the culture dish3, rosette-derived aggregates of neural cells that are manually picked and expanded4, and protocols that allow the cells to aggregate and grow in three dimensions5. The three-dimensional method is a relatively faithful representation of development of the cortex at early embryonic stages.

However, in all cases, the progeny of human iPS cells are comparable to an immature fetal stage. Many laboratories are working to improve the efficiency of differentiation intomore mature and functional neurons.

Some approaches for improving this efficiency include using biomaterials such as synthetic hydrogels to mimic a more natural environment. Another option is microfluidic chambers — small chambers that allow continuous perfusion of the cells with a small amount of fluid, mimicking in vivo exchanges — to improve neuronal maturation and connectivity.

The iPS model will also be our first opportunity to explore how genes and their transcripts regulate disease processes, and how genes interact with one another dynamically during human development. New technologies are rapidly evolving that allow efficient genetic manipulation.

This was initially difficult to do in human iPS cells using the classical approach. However, enzymes that cleave DNA at certain sites — such as zinc-finger nucleases and transcription activator-like effector nucleases — allow researchers to target specific genomic sites to insert or correct mutations.

This approach will allow researchers to manipulate human genes to establish their functions in neural development, as well as in diseases,even if only in the dish.

Flora Vaccarino is Harris professor of child psychiatry at Yale University. Jessica Mariani is a postdoctoral associate in her laboratory.