Paul Patterson
Professor Emeritus, Caltech
Sign up for Spectrum's newsletters
Thanks for subscribing! 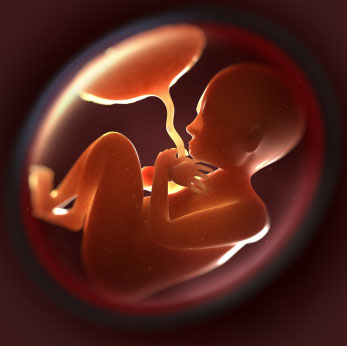 Hot spot: The placenta amplifies maternal signals and molecules, which in certain circumstances can up autism risk.

As the central organ regulating maternal-fetal interactions and embryonic development, the placenta is perfectly positioned to mediate environmental and genetic risk factors during prenatal development1, 2. It may also relay risk factors for autism to the fetus.

There is increasing evidence implicating the placenta in autism risk. For example, abnormal inclusions of trophoblasts, the cells that comprise the placenta, are found more frequently in placentas from mothers of children who develop autism than in controls3. Also, placental inflammation is associated with impairments in communication and social interaction in the child, as measured by low ratings on the Modified Checklist for Autism in Toddlers4.

The placenta is also an active filter — for example, it regulates the transfer of steroid hormones and antibodies. It can also amplify signals coming from the mother, including those involved in nutrition and endocrine function. Under certain circumstances, such as stress and inflammation, however, this amplification can harm the fetus.

What’s more, growth restriction of a fetus because of deficient placental function leads to low birth weight. These children have an increased risk for developing autism. The association between low birth weight and autism is also true for premature infants5.

It is not clear whether problems with the placenta are directly responsible for a subset of autism spectrum disorders in people. However, at least in sheep, inducing inflammation in the utero-placental compartment is sufficient to cause neurological deficits reminiscent of autism6.

A number of clinically relevant insults during pregnancy are known. Researchers are studying one of these, maternal infection, in rodent and non-human primate models by mimicking a viral or bacterial infection.

Maternal immune activation induces cytokines, molecular signals of the immune system, in the placenta. The cytokines can, in turn, activate immune cells within the placenta7, 8, 9, 10, 11, 12, causing them to send signals to trophoblast cells that eventually lead to an altered placental hormonal balance11.

Similar cytokine imbalances are seen in people. Elevated levels of MCP-1 and TNF-alpha in amniotic fluid are associated with increased risk of autism in the child13. The same is true for elevated cytokine levels in maternal blood14.

Infection and inflammation also alter placental levels of the amino acid tryptophan and its breakdown product kynurenine17. Tryptophan is a precursor of serotonin, an important chemical messenger of the nervous system. Circulating and brain serotonin levels are altered in autism, and the placenta is a major source of serotonin for the fetal forebrain18.

Changes in fetal levels of serotonin are likely to affect brain development. Serotonin regulates early events in development — for example, by directing axons to their correct place in the brain and the generation of new neurons. Maternal infection in animal models also alters tryptophan/kynurenine levels in the fetal brain and causes impairments in serotonin signaling in the offspring19.

The placenta also serves as a primary source for hematopoietic stem cells (HSCs) during pregnancy. These cells give rise to all blood and lymphatic immune cells, and at least some are known to originate in the placenta and are believed to seed the fetal liver at a later stage of pregnancy.

Their development and maturation is guided by environmental cues, such as cytokines. So, inflammatory insults that alter cytokine balances in the placenta could skew the development of HSCs, leading to immune dysfunction later in life.

In support of this theory, both fetal and adult bone marrow HSCs are abnormal in mice born to mothers who had an infection during pregnancy. Also, PDGF-B, a growth factor that regulates placental HSC differentiation, is modulated by cytokines such as interleukin-6, interleukin-1 beta and TNF-alpha20. Changes in placental levels of these cytokines may affect HSC development.

These results suggest a potential mechanism for how early-life challenges can lead to persistent immune abnormalities, which studies increasingly suggest is a feature of autism21.

Changes in the placental environment may be the link between autism risk factors such as maternal infection and preterm birth, and autism symptoms such as immune dysfunction and elevated serotonin in the blood. These effects — in addition to the detrimental consequences of placental pathology such as lack of oxygen or malnutrition — can lead to long-term impairments in neurodevelopment.

Paul Patterson is the Anne P. and Benjamin F. Biaggini Professor of Biological Sciences at the California Institute of Technology, in Pasadena. Elaine Hsiao is a graduate student in his laboratory.