Looking at autism through the fruit fly 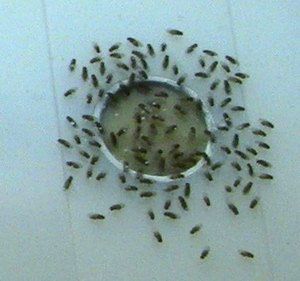 Following flies: When fruit flies enter an enclosure, they explore their new environment and then cluster around a food source, whereas a second group of flies immediately joins the others.

Ever since Seymour Benzer began isolating behavioral mutants in the late 1960s, the fruit fly Drosophila melanogaster has provided insight into the roles of genes in the nervous system. But this would be no help in understanding human neurobiology if the phenomena and principles of fruit fly biology were fundamentally different from those of humans. Fortunately, an ever-increasing number of criteria suggest they are alike.

For one, the ability to sequence entire genomes has shown that there is a striking degree of similarity between the genes of distantly related creatures. Flies and humans share a great many of the same genes and flies have versions of about 73 percent of known human disease genes. There is also considerable conservation of metabolic and signaling pathways at the cellular level between the two organisms1.

There is even emerging evidence of similarities in neural circuits and brain regions between flies and humans. This conclusion is based on the finding that neurons in flies and humans that have the same physiological and behavioral function also have similar patterns of gene expression. For example, the mammalian hypothalamus, a brain region that regulates body temperature and hormones, shares many genetic and physiological functions with a cluster of cells called the pars intercerebralis in the fruit fly.

Because of this, there is good reason to believe that the characteristics, interactions and roles of genes in the brain of the fruit fly will provide important guidelines for how to think about the same genes in humans2.

In autism research, the fruit fly has so far been used primarily as a test bed for identifying the cellular and molecular functions of human autism-associated genes.

The best studied of these is the FMR1 gene, responsible for fragile X syndrome, a condition in which about 30 percent of individuals have autism symptoms.

Researchers have studied DFMR1, the fruit fly homolog of the human gene, extensively to understand its role in neuronal architecture, activity-dependent pruning and neurotransmission, and for its contribution to circadian rhythms and learning and memory3.

Researchers have also used the fly to study genes that have been implicated in autism in association studies, in particular, NRXN4, the fly homolog of CNTNAP2, and NLGN3. In flies, NRXN4 is prominently expressed in glia, support cells in the brain, where it mediates glial migration, the maintenance of neuronal processes, and the organization and function of synapses,the junctions between neurons.

NRXN4 has also been shown to play a role in neurons, where it is required for proper synapse organization. Similar studies have been made of the NLGN3 homolog in Drosophila, where it is involved in activity-dependent synapse stabilization4.

Another way that research on fly genetics is contributing to our understanding of human disease, still in its early phase, is by using the fly genome to chart interactions among gene networks. This approach takes advantage of the fact that it is easy to engineer flies with multiple mutations and to assay their effects.

This line of work asks whether the various candidates that have been found in human gene mapping studies are functionally related to one another. Network interactions are emerging as an increasingly important area of study. This comes from the realization that no gene acts alone and that a wide range of genes is capable of affecting any one symptom. As the study of gene networks proceeds, the role of autism candidate genes may become clearer5.

Researchers are also developing assays for social behavior in the fruit fly6. Some of these are as simple as testing how flies that have been housed in groups behave compared with those that have been kept in isolation. Using these assays, researchers have seen effects on circadian rhythms, sleep, courtship and aggression.

Flies also typically tend to assemble at locations that are already occupied by other flies. Researchers have used this basic tendency to study autism-like traits, and have shown behavioral effects in DFMR1 mutants that could be relevant to the disorder, such as a reduced tendency to associate with one another compared with controls.

Whether the kinds of studies outlined above will contribute to understanding autism will depend ultimately on finding mechanisms in fruit flies that perform similar functions in humans. The idea that mechanisms found in simple organisms such as the fruit fly would have relevance to human biology and complex diseases such as autismstarted out as an article of faith7. As time passes, that faith is being increasingly validated.

Ralph Greenspan is associate director of the Kavli Institute for Brain and Mind at the University of California, San Diego.