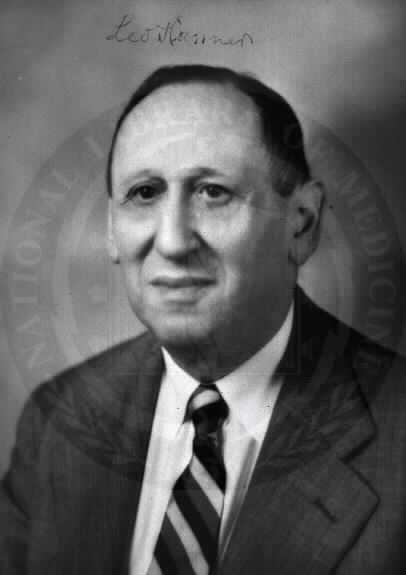 Leo Kanner was the first scientist to clearly define autism.

Leo Kanner knew that the moment he read the 33-page letter from Donaldʼs father that described the boy in obsessive detail as “happiest when he was alone… drawing into a shell and living within himself… oblivious to everything around him.” Donald had a mania for spinning toys, liked to shake his head from side to side and spin himself around in circles, and he had temper tantrums when his routine was disrupted.

When Kanner met Donald, his suspicions were confirmed. In addition to the symptoms the letter described, Kanner noted Donaldʼs explosive, seemingly irrelevant use of words. Donald referred to himself in the third person, repeated words and phrases spoken to him, and communicated his own desires by attributing them to others.

Kanner described Donald and ten other children in a 1943 paper entitled, Autistic Disturbances of Affective Contact1. In this initial description of ‘infantile autismʼ, which went on to become a classic in the field of clinical psychiatry, Kanner described a distinct syndrome instead of previous depictions of such children as feeble-minded, retarded, moronic, idiotic or schizoid. In the words of his contemporary Erwin Schrödinger, Kanner “thought what nobody has yet thought, about that which everybody sees.”

In recent years, experts have called attention to the inability of children with autism to understand that others have beliefs that are different than their own. These deficits prevent normal social intercourse, including the ability of the children to engage in joint fantasy or to empathize with the feelings of others.

Kanner borrowed the term ‘autismʼ from Eugene Bleuler, who had coined it to describe the inward, self-absorbed aspects of schizophrenia in adults. But Kanner did not consider infantile autism an early form or prodrome of schizophrenia. The clinical signs were not identical and, unlike schizophrenia, Kannerʼs patients seemed to have autism from birth.

Kanner was born in Austria and educated in Berlin. He came to the U.S. in 1924. In 1930, he moved to Johns Hopkins University, where he founded the first child psychiatry clinic in the country. Based largely on his clinical experience, he then wrote a textbook that defined the field of child psychiatry. His humanism is evident in his lifelong fight against the abuse of children with autism and intellectual disability, and his enduring concern for their families. He also made extraordinary efforts to help physicians and scientists escape from Nazi-controlled territories.

The spectrum of clinical conditions labeled autism soon expanded beyond Kannerʼs first description. In 1944, one year after Kannerʼs paper, Hans Asperger described children that he also called ‘autistic’, but who seemed to have high non-verbal intelligence quotients and who used a large vocabulary appropriately. Confusion remains about the distinction between Asperger syndrome and high-functioning autism.

It is remarkable that although Kanner and Asperger were born in Austria and educated in Germany, and both were astute clinicians focused on the same problems, they did not refer to each other. This may, initially, have been due to isolation during the war years, but it does not explain 35 years of silence.

Clinical definitions of autism continue to evolve. The current Diagnostic and Statistical Manual of the American Psychiatric Association (DSM-IV) includes autism in a broad category of pervasive developmental disorders. This spectrum blurs at the edges with disruptive behavior, communication disorders and intellectual disability at one end, and with behaviors now thought to be normal at the other. Repeated revision and expansion of the diagnostic categories has probably contributed to the gradual increase in the reported prevalence of autism spectrum disorders that has been evident since the mid-1980s.

Controversies over clinical definitions may only be resolved with the discovery of biomarkers ― biochemical, anatomical or physiological measures ― that are specific to one or more aspects of autism. Biomarkers are essential for an understanding of brain mechanisms underlying the various autisms, and for the development of useful therapeutics.

Kanner appreciated the need for biomarkers from the beginning. He noted a tendency toward autistic behaviors in some families and described autism as an ‘innateʼ disorder. He foresaw the need for research into the genetics of autism at about the same time that DNA was first identified as the bearer of genetic information. Today, genetics offers the best hope for discovery of relevant biomarkers.

It took courage to offer a hypothesis of innate determinants in 1943. The prevailing view of the day, based on Freudian psychology, had been that autism was due to poor parenting, with much of the blame placed on ‘frigidʼ mothers accused of rejecting their children.

Studies of identical twins have since made it clear that genetics is a powerful force in autismʼs etiology. But it is also clear that autism is not inherited in a simple Mendelian fashion. Many genes, perhaps as many as 50, may be involved, each one adding to the risk of clinically manifest autism. As these genes are uncovered, clinical descriptions will be further revised, and some may disappear entirely.

We may not speak any longer of autism or schizophrenia or bipolar disorder. Rather, traits that share the same underlying brain mechanisms, and that may fall into similar therapeutic categories, may be emphasized. The relation between autism and other disorders will be debated on a different level.

The search for genetic factors that enhance the risk of autism is now in high gear. Evidence for changes in DNA sequence, structural rearrangements of DNA including sub-microscopic, de novo copy number variants, and epigenetic modifications of DNA, have all been reported in recent years. Success in this effort will lead to a clearer idea about mechanisms that disrupt normal brain development and underlie the onset of autism. Identification of such risk factors and how they might interact with environmental influences will be only the first step in this effort. Progress will speed up once the entire cast of characters is identified.

Other measures, including quantitative functional anatomy, revealed through powerful, new imaging techniques, and quantitative estimates of proteins and gene expression will contribute to the search for biomarkers.

The need for research into the biological bases of autism and of other neuropsychiatric disorders is urgent. In the midst of the current excitement, Kannerʼs paper is worth rereading. Not only is it is the source of much of what we do today, but it can provide new clues for those prepared to receive them. Future attempts to resolve the neural bases of autism will rely heavily on this seminal work.

Reproduced without permission of the author, for educational purposes only, according to the Fair Use doctrine.