Isabelle Rapin: Lessons from my clinic 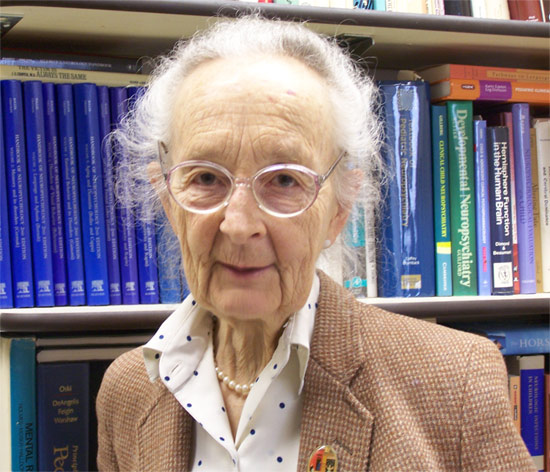 Full physical: Clinicians should test children for hearing impairments before they diagnose them with with autism, cautions Isabelle Rapin.

Why is the clear-cut, yes-or-no diagnosis of an autism spectrum disorder so difficult?

There is much disagreement among experts about borderline cases of autism, precisely because it is behaviorally defined and lacks — and will continue to lack — a test that provides a definitive answer.

Autism is diagnosed based on the severity and variety of its symptoms — in other words, its symptoms mimic height, weight, blood pressure or blood sugar, which are dimensional. In each, the cut-off between yes and no, or affected and normal, is based on agreement among experts and not a specific test — such as an X-ray that shows a fractured bone. You or I would be diagnosed as giant, dwarfed, obese, hypertensive or diabetic depending on how far from average we are on these measures.

No one disagrees with or doubts the diagnosis if the measure is very far from average, but there is a wide gray area at the edges of both normality and disease. This is also the case for many other developmental disorders, such as language delay, attention deficit hyperactivity disorder and intellectual disability. This makes diagnosing autism very difficult and easy to confuse with these and other disorders.

Especially in the days before autism was all over the Internet and print media, parents who came for advice were most likely to report problems with language: Either their preschooler’s language was delayed, or it had ceased to progress, had deteriorated, or even disappeared. Parents told us that it was usually between the ages of 15 to 30 months — occasionally even earlier — that they had become aware of the delayed language, plateau or regression.

Awareness of this problem was rarely sudden, but had occurred over several weeks, so that it often escaped attention — sometimes for months. To make matters worse, pediatricians frequently reassured parents, telling them that development can progress in leaps and starts or that little boys are likely to speak later and not as clearly and eagerly as little girls do.

Often it was a nursery school teacher, a speech pathologist friend, a grandmother or the worried parents themselves who pushed for an investigation that brought them to my office. At the time, parents’ main worries were intellectual deficiency or a developmental disorder limited to language. I would bring up two additional concerns: hearing loss or an autism spectrum disorder (ASD).

A glaring example:
Quite recently, I saw a lovely 3-year-old girl whose language was clearly deficient. Her nursery school teacher brought up the question of an ASD (this suspicion indicates how much better teachers are educated about autism than they were in the past). The child was very cute, intelligent and did not respond reliably when called by name, a frequent feature of children with autism. She related well to her parents and I was able to engage her in playing ball, neither of which is sufficient to rule out a diagnosis of ASD.

I spent a lot of time discussing diagnostic dilemmas, until I realized that I hadn’t asked whether the parents had an audiogram, or formal hearing test, to show me. The child had passed the newborn screen and the test had not yet been performed. The next phone call from this family reported that she had a significant hearing loss, especially for the high-pitched sounds critical for differentiating one consonant from another, and thus for language development.

As you can imagine, this cute little girl was promptly fitted with hearing aids, which she readily accepted, and the diagnosis of ASD flew out the window — her hearing loss is caused by an inner ear problem; it not currently severe enough to contemplate a cochlear implant, although we do not yet know whether it is progressive or not. The lesson is that prompt and competent hearing testing must be number one on the agenda for any child in whom there is a concern about language development, and must never be neglected. It must be performed even if the child appears to be hearing and needs to be repeated if language deteriorates.

(I will discuss in a future article how to distinguish developmental language disorders from an ASD).

Diagnostic difficulty:
These days, Internet-savvy parents worry about autism but do not always tell me their concerns when they visit my office, because they want to hear my independent diagnosis. Let me emphasize that autism is a behavioral diagnosis for which there is no biological test.

The importance of genetics has come to the forefront. Well over 100 different genetic mutations and other chromosomal abnormalities are known. But the key diagnostic dilemma is that, with some exceptions, virtually all these same gene variants or conditions can be found in healthy people.

There is also no prenatal diagnosis for behaviorally-defined autism, only for some neurological conditions that may be associated with autism — such as fragile X syndrome and Rett syndrome, and a small number of severe metabolic illnesses such as phenylketonuria, and malformations such as Joubert syndrome.

In the majority of individuals with an ASD for whom there is no obvious physical or neurological abnormality, multiple different genes probably contribute to the clinical picture. Knowing about these genes is useful to scientists trying to understand some of the biochemical or metabolic differences in the cells of people with autism, and may enable them to develop effective, scientifically-based medications.

But these differences will not determine whether the diagnosis of autism is correct. They will not be able to predict whether individuals with these genes will definitely have the group of symptoms we call autism. Differences in cellular metabolism may indicate that a person is at higher risk for autism, but not necessarily that a behavioral difference will be severe enough for a diagnosis of ASD.

What to do:
Most schools cannot deal with fuzzy dimensional diagnoses.

In order to assign Paul to an enclosed classroom with only eight children, a specialized teacher and aides, he needs to be categorically diagnosed as unequivocally having autism and being severely affected — regardless of the biological cause of his ASD. Another child on the spectrum with adequate language and IQ may be assigned to a class for typical children, yet be provided an aide if his behaviors are sufficiently handicapping. But he could also ‘lose his diagnosis’ and the extra help if his social skills are adequate. Such changing diagnostic labels and services are the result of being forced to assign categorical labels for what are dimensional deficits of variable severity.

Parents and teachers — and especially financially-strapped school districts — often ask for medication to minimize the expenditures associated with coping with such children’s behaviors. A review of medications widely prescribed for children with ASD concludes that only two fulfill research criteria for efficacy. And those two help only with aggressive behaviors, and have troublesome side effects1. A companion review indicates that the most effective intervention is intensive individualized intervention starting at the earliest possible age2.

These findings agree with my longstanding clinical experience. Knowing that no medical treatment is curative, as a neurologist I worry about potential long-term consequences of psychotropic medications and advocate for behavioral management, which, although more expensive, may help the child learn and permanently alter his brain development.

Lessons learned:
Autism has come a long way since I entered this field half a century ago. We have done away with the theory of refrigerator mothers. We know that autism spectrum disorders are disorders of the developing brain and have learned that genetics plays a major — but by no means exclusive — role in their cause. We are aware that epilepsy is linked to autism in ways we do not yet understand fully, but that it needs to be treated vigorously, especially if it occurs in infants and toddlers.

We need much more neurological, and genetic information, even though at present it rarely leads to a change in management of the child or provides firm genetic counseling for the family.

We are convinced that massive and expensive tests such as imaging, electrophysiology and genetics are almost always uninformative clinically, unless there are features that raise the suspicion of a diagnosable condition.

Families deserve the credit for major steps forward, because they banded together to insist that the results of such tests be collected and stored in large data banks accessible to researchers. Parents got the ball rolling by raising money and persuading the National Institutes of Health and the research community that autism spectrum disorders were crying out for investigation and for novel educational and medical treatments.

I salute them and anticipate that we can make much more progress if we can find the means to sustain the momentum of the past decade.

Isabelle Rapin is professor of neurology and pediatrics at the Albert Einstein College of Medicine in New York.