Insights for autism from Williams syndrome 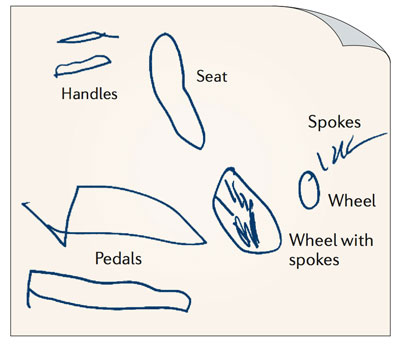 Broken bike: Children with Williams syndrome have trouble understanding how different parts make up a whole object, such as a bicycle.

Understanding the complex syndrome of autism and pushing research towards new therapies is a formidable task. Where should one begin?

One option is to look at well-characterized genetic syndromes, such as Williams-Beuren syndrome, that overlap with autism. Williams syndrome isa neurodevelopmental disorder affecting as many as 1 in 7,500 births1.

In general, given the high heritability of autism, starting with genetics might seem like the obvious choice. Researchers are reporting some successes with this, such as finding common genetic variants through genome-wide association studies (GWAS). Still, it has become clear that the genetic architecture of autism is complex. As with other heritable psychiatric disorders, such as schizophrenia and bipolar disorder, multiple genes play a role and each gene contributes to only a relatively minor risk.

The problem is compounded by the way that psychiatric diagnoses work: A phenotype composed of behavioral symptoms and how they developmay be too far removed from the actual biology to link it togenetic data. This is partly why our understanding of the molecular pathophysiology of these conditions is limited2.

If we stick with the genetics approach, we need to decide which genes to focus on. GWAS are the best way to find variants that occur frequently in the population, but these tend to have only small-to-moderate effects on complex behavioral phenotypes3. If one is interested in high-risk variants, these will, correspondingly, turn out to be rare and so not explain much about the risk. However, they have the great advantage of a potentially more straightforward route from genotype to phenotype.

Our understanding of other complex illnesses, such as Alzheimer’s disease, has been advanced considerably by this strategy of solving the problem ’from the edges.’ In autism, studying conditions such as Rett syndrome or fragile X syndrome has yielded important therapeutic clues that may be relevant for autism in general.

Good points of departure for applying such a strategy are copy number variants (CNVs), in which a known group of genes along a chromosome is deleted or duplicated. CNVs are instructive experiments of nature affording researchers the opportunity to identify distinct, but also interacting, contributions of genes to brain development, structure and function4. In the case of autism, for example, CNVs linked to autism have also been found in people with related disorders.

An excellent example for this strategy is afforded by Williams syndrome. This syndrome is caused by the deletion of one copy of approximately 1.6 megabases of DNA, encompassing about 25 genes on chromosome 7q11.235.

Neuropsychiatric problems in Williams syndrome are common and include developmental delay, coordination difficulties, hearing loss and hypersensitivity to sound6,7. The syndrome is also associated with a distinctive cognitive profile8,9, characterized by severe difficulty understanding how a whole is made out of parts, as, for example, in a puzzle.This ‘visuoconstructive’ weakness, together with a relative strength in verbal short-term memory and language, distinguishes Williams syndrome significantly from other disorders10.

A particularly striking feature of children with Williams syndrome is their high sociability and their empathy for others11,12. Individuals with the disorder are typically socially fearless and engage eagerly and often impulsively in social interaction, even with strangers.

This characteristic has led some clinicians and researchers to consider Williams syndrome as a kind of ‘anti-autism.’ In contrast with the hypersociability, increased empathy and fascination with faces in Williams syndrome, autism is characterized by deficits in social interaction. Unlike the relative language strengths in Williams syndrome, language in autism is usually relatively weak: Many individuals do not develop spoken language, and others have marked impairment in initiating conversation or speak in a repetitive or idiosyncratic way.

Researchers thus see autism and Willams syndrome as clinical opposites. However, several cognitive domains are impaired in both. These include deficits in nonverbal behaviors — such as eye contact, facial expressions, body postures and gestures — during social interaction and difficulty judging facial expressions13,14. The two disorders may also coexist more frequently than was previously appreciated15.

Clinically, the theory that Williams syndrome and autism are opposites does not stand up to scrutiny. However, the idea gains traction from a causal, genetic point of view.

The first reported case of a duplication of 7q11.23 looks somewhat likethe clinical opposite of Williams syndrome16. This individual has severe speech and expressive language delay, reminiscent of autism, whereas visuospatial construction skills are at the level of other family members.

A large 2011 study of rare CNVs in 1,124 autism families showed a significant association between spontaneous duplications of 7q11.23 and autism17. In other words, deletion is associated with Williams syndrome and duplication with autism.

This exciting observation suggests that examining which genes in the Williams syndrome region are most likely to be associated with autism can further our understanding of autism. The most notable of these are LIMK1, CYLN2and GTF2I18,19,20,21.

A study published earlier this year has shown an association between variants in GTF2I and severe social deficits and excessive repetitive behaviors in autism22.

Comparing the neural mechanisms that underlie the two disorders should also be instructive. For example, in both Williams syndrome and autism the amygdala has more densely packed cells, and both disorders show increased and decreased amygdala volume, compared with controls23.

The amygdala, as well as other key regions for face processing and social function, including the fusiform gyrus, are less active in individuals with autism than in controls24. However, amygdala activity may actually be elevated during face processing in relation to eye contact,suggesting a heightened emotional response25 in some individuals. In Williams syndrome, increased amygdala function along with deficient regulation by regions of the prefrontal cortex is linked to the social symptoms of the disorder26.

In summary, the intriguing idea of autism and Williams syndrome as opposites, while not useful clinically, may become increasingly useful as a research strategy now that a gene dosage-related genetic mechanism at 7q11.23 has been found to contribute to both.

Further studies should clarify the ways by which deletion and duplication at this region contribute to the symptoms of the disorders in the hope of advancing our understanding of the disorders and potentially highlighting therapeutic targets.

Andreas Meyer-Lindenberg is director of the Central Institute of Mental Health at the University of Heidelberg in Mannheim, Germany.