Insights for autism from Charcot-Marie-Tooth disease 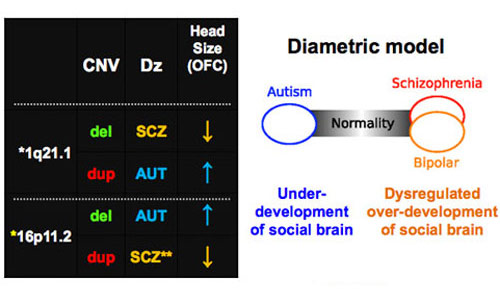 Polar opposites: Two regions in the human genome lead to contrasting physical and behavioral effects, depending on whether they are deleted or duplicated.

What can Charcot-Marie-Tooth neuropathy teach us about autism?

Charcot-Marie-Tooth neuropathy, or CMT, is a disorder that primarily affects peripheral sensory and motor nerves. The peripheral nerves are essentially the electrical system, or ‘wiring,’ of the human body, providing signals from the environment to the brain and delivering instructions and other ‘action items’ from the brain to the periphery. Usually, the farthest, or most distal, portion of the nerves are the most severely affected1.

Researchers gained a strong molecular foundation in understanding the genetics of CMT when they elucidated the mechanism for the CMT1A form of the disorder, which is caused by a duplication of the PMP22 gene2. This discovery revealed that the disease could manifest because of a subtle change in gene dosage3: Instead of a mutation in a gene altering the genetic code and producing an abnormal protein, just a change in the number of copies of a gene could cause disease.

One early success in the application of genetic technologies to the study of autism was the robust association with the disorder of a specific recurrent CNV in the 16p11.2 chromosomal region4. We are beginning to appreciate that, with respect to neurobehavioral traits, a genetic susceptibility CNV can manifest in a remarkable range of phenotypic findings.

As the ‘one gene, one enzyme’ hypothesis has clearly met its challenges, so too has the ‘one mutation, one disease’ corollary. Issues of variability of expression and reduced penetrance — whether a given mutation actually leads to a phenotype — provide further challenges for CNV-associated neurobehavioral phenotypes.

Families and researchers are faced with this uncertainty of clinical manifestation, which is further confounded by limitations of clinical phenotyping — how one identifies (sensitivity) and consistently characterizes (specificity) human behavioral traits and differentiates them from normal variation. Nevertheless, trends can emerge and the identification of such trends can perhaps teach us important lessons.

Two decades of genetic investigations have taught us that mutations involving any one of more than 40 different genes can result in a CMT neuropathy phenotype5. Similar genetic heterogeneity appears to exist for many human disease traits.

Both copy number gain and copy number loss can result in disturbed nerve function. Interestingly, at the PMP22 locus, CNV loss causes a clinical neurological entity distinct from that observed with CNV gain of the identical genomic interval.

For example, PMP22 duplication leads to the CMT1A syndrome, and PMP22 deletion leads to hereditary neuropathy with liability to pressure palsies, or HNPP, a neurological disorder that can suddenly affect the peripheral nerves on one side of the body and may first occur after trauma to the involved nerve. From this perspective, the HNPP deletion represents a genetic susceptibility CNV.

Although we are still in our early stages of understanding, it is interesting that CNV gain versus loss at the identical loci can also provide susceptibility to distinct neurobehavioral traits6,7,8,9. For example, deletion of 16p11.2 leads to autism and enlarged head size (macrocephaly) whereas duplication leads to schizophrenia and smaller head size (microcephaly)6,7. By contrast, duplication of another genetic region, 1q21.1, seems to favor autism and macrocephaly, whereas deletion of the region causes schizophrenia and microcephaly (See image).

In essence, one can genetically perturb the function of a neuron and its supporting housekeeping cells, called Schwann cells, in a multitude of ways resulting in manifestation of CMT.

These can include processes important to the cell body of the neuron, the axonal projections that transmit signals, and even events occurring at the synapse, the junction between two neurons.

Early studies also found that a significant fraction of cases of CMT caused by point mutations are spontaneous, or de novo, events.

In summary, the mutational target appears to be large  — more than 40 genes and counting — and de novo events can be caused by either single nucleotide variants or CNVs. The CMT1A duplication, however, accounts for much of sporadic disease, suggesting that different types of mutations may be prone to different rates of formation and new mutation frequencies may be much greater for CNVs13.

New mutations are traditionally believed to take place in the sperm or the egg, called germ cells. Such events can also occur in stem cells and the precursors of germ cells, resulting in individuals in whom a proportion of their germ cells are affected, called gonadal mosaicism.

We are also beginning to realize that many mutational processes can occur after fertilization, however, in the early egg-cell stages of the embryo or during embryological and fetal development, called somatic mutations14. Mutations that occur during development could be those more likely to form during mitosis, such as by a DNA replication-based mechanism11.

Perhaps an ultimate lesson that new mutations can occur at any time in the human life cycle is the discovery during the past decade that cancer represents a genetic disease resulting from somatic cell mutagenesis. Work published earlier this summer also demonstrates that Proteus syndrome is caused by somatic de novo mutations15. To what extent might somatic de novo mutations occurring during brain development be responsible for autism?

Genetic studies of CMT have taught us a lot about both nerve and neuron function and dysfunction of the peripheral nervous system. The central nervous system, the brain and human behavior may be an almost infinitely more complicated challenge to tackle. Still, genomic and genetic approaches, in particular newer technologies enabling genome-wide analyses, are beginning to reveal important roles for both CNVs and new mutations as causes of intellectual disabilities16 and autism17.

A huge amount of work remains. Perhaps we shouldn’t limit our investigations to certain mechanisms, such as those involving the synapse. Or perhaps we shouldn’t look only at mutations that change single base pairs, or focus solely on the role of gene coding sequences, or only on what we can observe from DNA isolated from blood.

Many potential genomic changes might indeed be involved in autism. Analyzing the entire genome for CNVs that delete only a single exon, that might occur de novo in association with autism — which are not detected by DNA sequencing technologies — could perhaps help identify some potential gene candidates18.

We have incredible tools available and the opportunity to use our imagination and creativity, as well as good old-fashioned hard work, to understand genetically caused perturbations in neurobehavioral processes that might result in susceptibility to autism. Only with insights provided by such experimental data can we begin to design and implement interventions that might mitigate the undesirable consequences of pathogenic mutation.

The current and future prospects for genetic research in autism are incredibly exciting. What’s more, genomics applied to human behavioral traits has the tremendous potential to provide biological insights into brain function.

James Lupski is Cullen professor and vice chair of molecular and human genetics at Baylor College of Medicine, and a practicing pediatrician and medical geneticist at Texas Children’s Hospital, both in Houston, Texas.