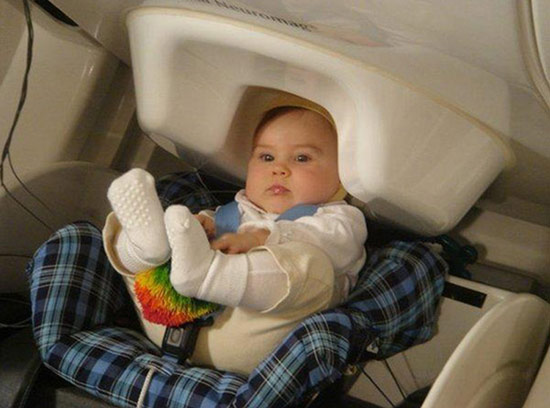 U. of Washington Institute for Learning &amp; Brain Sciences Inside information: Non-invasive techniques that measure electrical and magnetic activity within the brain promise to deliver diagnostic biomarkers for autism.

When we think of diagnostic tests, we often think about blood tests or the DNA test for cystic fibrosis, which have good sensitivity and specificity. For example, tests for strep throat, hepatitis and HIV all give clear yes or no answers. For autism spectrum disorders, however, no such tests exist.

Faced with the fact that there does not appear to be a single genetic or environmental cause of autism, and given the heterogeneity of symptoms, coming up with a clear yes or no test for autism is challenging.

Because of this, the field is attempting to identify biological markers that may signal a higher risk of developing autism. Of key importance in this search for biomarkers are measures derived from imaging and electrophysiology.

An experienced physician or neuropsychologist makes an autism diagnosis by observation and parent report when the child is, on average, 4 to 5 years old, although symptoms are typically present starting at 2 to 3 years and diagnosis can be made then, too. However, non-invasive brain measures can also provide diagnostic value.

Individually, these measures can distinguish children with autism from typically developing controls. However, they are even better at predicting the disorder when used in combination. For example, machine-learning methods — such as support vector machines2,5 — can detect patterns.

Combining several different functional and structural measures can also help researchers understand the basic properties of normal and abnormal brain development. For example, the electrophysiological properties of the cortex, combined with diffusion MRI measures of white matter within this region, could help define the structure and function of normally developing brains6. This could help researchers understand brain development in individuals with autism.

If these measures are validated for children as young as 12 to 18 months, it would allow earlier diagnosis than is currently available. For example, the IBIS structural MRI project, supported by the National Institutes of Health, aims to achieve this goal and is under way.

Imaging and electrophysiology biomarkers (as measured by EEG or MEG) can also have predictive value — indicating whether a child would be expected to have stronger symptoms in a particular domain. For example, the markers could predict the relative impact of social behavior, language or stereotypical behavior impairments.

For instance, MEG measures of how long it takes the auditory cortex to respond to ‘oddball’ speech sound changes — such as …/a/ /a/ /a/ /u/… — can differentiate between typically developing individuals and those who have autism or clinically significant language impairment7.

Animal models — such as genetically engineered mice — can help researchers understand the neurological basis of autism and determine the effect of autism-associated mutations. They are also ideal for testing and evaluating pharmaceuticals.

Mouse models are often validated by measuring whether they recapitulate behaviors reminiscent of those seen in autism. For example, whether a mouse is interested in a new mouse in its cage is a measure of social functioning.

Powerful as this approach is, the use of imaging and electrophysiological ‘traits’ shared by animal models and children with autism can also provide a strong link between experimental and clinical research8. The brains of these mouse models can help interpret abnormal brain activity in autism and provide ‘response-to-therapy’ biomarkers in clinical trials of therapies.

In short, the roles of biomarkers in autism may be manifold: early diagnosis, severity prediction, therapeutic target identification, bridging bench and bedside, and monitoring response to therapy. Advances in imaging — especially structural and diffusion-MRI — and electrophysiology methods, such as EEG and MEG, offer promising approaches to meet these opportunities.

Timothy Roberts is vice chair of research in radiology at the Children’s Hospital of Philadelphia.