How to undo stereotypes that hinder women in science 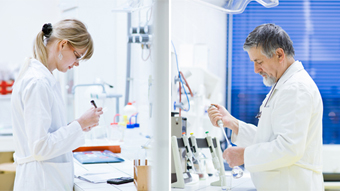 Unequal opportunity: Evaluators subconsciously apply more stringent standards to a female scientific candidate than to a male candidate with the identical résumé.

Late this summer, a paper from Yale University researchers led by Jo Handelsman delivered some sobering news: There is still a clear bias against female scientists. This new study has widely engaged people, perhaps because it was published in a prominent journal and its conclusions are clear. The findings confirm the impression of many women in science, at all career levels, who feel undervalued.

The study used a clever design, in which an application, modified to be either from ‘Jennifer’ or ‘John’ was given to a male or female faculty member for evaluation. Evaluators in biology, chemistry and physics departments at six highly ranked research universities were told the résumé was real and that the evaluation would be used to develop mentoring materials for science students.

There were two key findings: First, ‘Jennifer’ received significantly lower ratings than ‘John,’ and second, male and female evaluators were equally likely to give ‘Jennifer’ lower ratings. The ratings pertained to competence, hireability and whether the candidate was deserving of mentoring. The evaluators made lower salary recommendations (by about 12 percent) for ‘Jennifer’ relative to ‘John.’

Are these results surprising? In one way, yes, as I would bet that every faculty member involved felt he or she was evaluating the applicants objectively. After all, that’s what scientists are trained to do — evaluate data in a rigorous, objective way.

What crept in is something well described, and therefore not surprising: what psychologists and philosophers call ‘unconscious bias’ or ‘schema.’ These terms refer to deep expectations influenced by cultural stereotypes or, in some cases, by experience. They include the anticipation that ice cream will be cold and sweet, for example, but can also include the expectation that your new neurosurgeon will be a man (in the U.S., more than 90 percent of neurosurgeons are).

My colleagues who study these matters explain that schemas help us deal with the complexities of the world. Schemas help us respond quickly to new situations, providing short cuts to sort through the mass of information we encounter at the time.

But what if the neurosurgeon is a woman? Certainly, you would be surprised. And because your comfortable expectation has been challenged, maybe you would be a bit confused, or disappointed, or wonder if she is as competent as a male neurosurgeon.

The Yale study showed that scientists carry the schema that women are less competent than men. Specifically, the results indicate that they subconsciously applied more stringent standards to the female candidate than to the male, and that women are undervalued.

The candidates in this case were applying for a lab manager position, but there is every reason to think that this schema, or bias, holds for students, postdoctoral researchers and faculty candidates. Indeed, undervaluation of women has been reported previously in many fields.

What are the consequences of being undervalued? Jennifer’s low ratings relative to John’s would have immediate employment consequences, of course. Furthermore, low evaluations can erode confidence and impact productivity. But of even greater concern is that over sequential evaluations, differences build up, and a woman not viewed as favorably as an equivalent man will advance less than is warranted at every step, cumulatively decreasing career success.

Stated a bit differently, the unconscious use of gender in assessments makes it more difficult for a female candidate to be viewed as outstanding, since she must be more accomplished than a male counterpart to be judged equal.

Together, the outcomes of undervaluation are severe, and can seriously harm women’s careers.

Over the past few decades, the atmosphere and possibilities for women in science and engineering have improved wonderfully, thanks to diligent measures that promote gender equality. But real problems remain, as this study confirms, raising questions of how to overcome undervaluation and other issues.

The answers are complex, because the issues are pervasive and intertwined with societal practices. 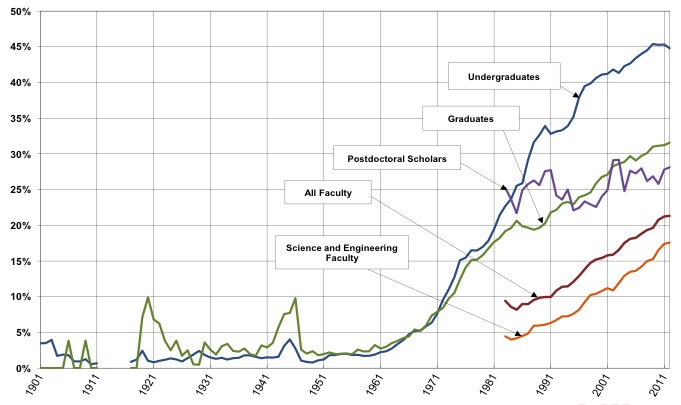 Click to enlarge image Changing demographics: At the Massachusetts Institute of Technology, the proportion of women undergraduates, graduate students, postdoctoral scholars and faculty has risen dramatically since 1901.

The starting point is emphasizing the overarching charge of all searches — to identify and bring the best people to MIT. Then we move into lively and useful discussion around how to find and assess candidates equitably, with the understanding that a fair search takes considerable work. Drawing on our own experience and that of colleagues at MIT and other universities, we address several key points.

We address personal schemas from the start, noting that every member of every search committee brings along his or her own compendium of biases, and that these may lead to an evaluation of a female candidate that is not objective.

We also tackle up front the incorrect assumption that can arise from necessary efforts to be fair — that women are given an unfair advantage relative to men in the hiring process. This assumption can hamper fair evaluation of candidates during interviews and after a candidate is hired.

We consider how use of evaluation criteria, including a printed form, can help a committee assess candidates objectively. This can also be useful during candidate interviews. An extra set of faculty members not on the search committee adds oversight, and assesses whether additional candidates should be added to the short list of those invited to interview.

A related issue gets considerable attention: how to recognize and respond to reference letters that may carry gender bias. These may undervalue the scholarship of female candidates and influence the search committee. Some guidelines help faculty in this assessment.

Over several years, our conversations have grown more sophisticated and we have made significant progress towards equitable search procedures.

The increasing number of women, at MIT and elsewhere, who are leaders in science is an outcome of overcoming stereotypes in past decades, and the opening of opportunities that resulted.

But, as the Yale study emphasizes, some schemas and stereotypes remain, hampering recognition of the true talent of female science candidates.

The challenge for this decade is to work at recognizing talent in ways that truly overcome gender bias. We have come such a long way towards realizing gender equity in science that I believe we can meet this deep and crucial challenge.

Hazel Sive is professor of biology at the Whitehead Institute for Biomedical Research at the Massachusetts Institute of Technology in Cambridge.