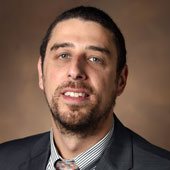 Alan Lewis
Assistant professor, Vanderbilt University
Sign up for Spectrum's newsletters
Thanks for subscribing!
The Expert:

Autism researchers routinely rely on a range of methods to precisely control the activity of specific neural circuits in the brains of awake animals. They have used these methods extensively to study basic neural control of social behavior and how changes to brain circuits may contribute to the social difficulties characteristic of autism.

However, social behavior involves numerous measurable and unmeasurable variables, which makes it difficult to identify causal relationships and achieve reproducible findings across similar but non-identical paradigms. For instance, an ever-expanding toolbox equips scientists with new methods to manipulate circuits, which can open new frontiers for experiments. Yet a true mechanistic understanding of how these new methods compare with those used previously can lag by several years, again hindering reproducibility across labs and techniques. And editorial and funding priorities often handsomely reward claims that certain circuits possess extraordinary specificity for the control of higher-order social behaviors, luring scientists away from dispassionate description of how circuit manipulations influence behavior and toward a narrative that may discount evidence to the contrary.

These three complex factors are but examples of many challenges that should give basic and translational autism researchers pause when conducting circuit manipulation studies of behavior. What steps should be taken to avoid dubious conclusions and increase the likelihood of reproducible studies?

My colleagues and I addressed this concern in a recent article published in eNeuro. We set forth simple yet often overlooked practices and standards for designing and interpreting experiments for parsing circuit control of behavior. These include a consideration of the numerous variables that could explain the results, the use of multiple behavioral assays, and reporting results in a descriptive and unbiased manner.

Here, I briefly apply these practices to the case of social behavior, given its outsized importance to autism research. None of these standards is revolutionary and all lend themselves to use by any behavioral neuroscience laboratory. It is in their simplicity that these suggestions may facilitate generalizability across labs and neuroscientific fields to maximize the value of animal research.

Imagine you have found that reducing the activity of a neural circuit decreases the amount of time your experimental mouse spends interacting with another mouse in a behavioral task. It might be tempting to suggest this circuit specifically “controls” social interaction, but this conclusion would be premature.

The reason hinges on the fact that social behavior depends on numerous other intermediate behaviors or variables that can be influenced by the neural circuit manipulation. For example, changes in locomotion, exploration or sensory processing induced by the circuit manipulation could dampen social interaction without the circuit having any specific relevance for social behavior. More complex mediators include attention, salience, reward processing, anxiety and motivation.

A creative researcher could identify an almost endless number of intermediate variables clouding the causal relationship between circuit activity and social behavior. That does not mean that researchers must investigate each of these possibilities or that a study lacking an exhaustive investigation is too much in doubt to be of value.

Indeed, interminable investigation of intermediate variables could further hamper the reproducibility of scientific studies, because researchers would need to put their cohort of mice through many serial behavioral assays. Alternatively, testing many different cohorts of mice in a variety of assays could introduce logistical, financial and animal welfare challenges.

Therefore, it is up to the field of autism and social neuroscience researchers to establish a standard set of the most important mediator variables that should be controlled for in studies of social behavior. These standards need not be prescriptive, where only one specific assay can fulfill such a purpose. Rather, an agreed-upon set of controls would provide guidance to empower researchers to plot a course to satisfy what the field considers most important and avoid the need for arbitrarily selected control experiments.

The interpretation of experiments is, of course, influenced by what the researcher believes the experiment is measuring. For example, the observation that a circuit manipulation reduced the amount of time an experimental mouse investigated another mouse in a neutral cage context compared with a control mouse might be interpretated as a social deficit. But another researcher with a different research goal might interpret this finding to reflect faster habituation to a novel mouse. Both are reasonable and illustrate that a single behavioral measure cannot prove the functional property of a circuit, necessitating the use of multiple behavioral measures to support any claims that a circuit serves a highly specific function.

Another simple way researchers can increase clarity and reproducibility between labs is to simply report what they did and observed without interpreting those results. For instance, the results section of a study might say, “In a neutral cage, interaction time between wildtype mice was greater than between knockout mice,” rather than “social behavior was greater in the wildtype mice than in the knockout mice.” Researchers can then interpret the result in the discussion section, where it can also be contextualized amongst other behavioral experiments designed to probe intermediate variables in line with those considered important by the field.

The use of methods to manipulate the activity of neural circuits or record their activity in vivo will continue to grow. These techniques furnish tremendous opportunities to understand how the brain controls and encodes social behavior and how genetic or environmental variability associated with autism might influence social behaviors. Yet, as neuroscientists we must be mindful of sometimes conflicting interests between the story that can be supported by data and the emphasis on specificity in the circuit control of behavior that is rewarded by subsets of journals or funding agencies. The simple steps discussed above will help move the field of autism and social neuroscience research toward reproducible circuit manipulation studies.