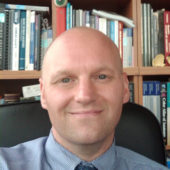 Randy Kulesza
Professor, Lake Erie College of Osteopathic Medicine
Sign up for Spectrum’s newsletters
Thanks for subscribing!
The Expert:

Many individuals with autism have hearing problems. In fact, Leo Kanner included this trait in his original description of autism.

The type and severity of these problems vary: Some autistic people are hypersensitive to sound, such that a doorbell can trigger intense fear or panic; others have difficulty attending to conversations when there is background noise.

Studies over the past 50 years point to a neurological basis for some of these challenges. For instance, children with autism have atypical ‘brainstem auditory evoked potentials,’ or BAEPs1. A BAEP is an electrical response to sound that originates in the auditory nerve, which connects the inner ear to the brain, and ends in the brainstem, the way station between the brain and spinal cord. Autistic people tend to have smaller and slower BAEPs than their neurotypical peers do.

A 1992 imaging study showed that they also have unusually small brainstems2. And a 1996 study of brain tissue from a 21-year-old autistic woman revealed a dearth of neurons in two areas of the brainstem, the pons and medulla, and other unusual neuronal features in the medulla. Since these early observations, several teams have reported additional structural and functional differences in the brainstem of people with autism.

My lab is building on this important work to understand how the structure and function of the brainstem and auditory system is altered in autistic people. We believe these studies may provide insight into the neurobiology of autism and may even pave the way to newborn screening and early diagnosis for the condition.

Between 2005 and 2015, my team analyzed postmortem brainstem tissue from 39 people with autism and 77 controls. We found that the autistic people had significantly fewer neurons in their auditory brainstem than the controls did. This finding was surprisingly consistent: Every autism brain that we studied, including brains from children as young as 2 years, had fewer auditory brainstem neurons than the control brains3,4.

One cluster of brainstem neurons called the medial superior olive was dramatically altered in the autism brains. This cluster contained fewer neurons than in controls, and those neurons were often misshapen or haphazardly arranged. Some people with autism also had collections of neurons in their brainstem that appeared to have lost their way during development3,4.

We wondered if we could reliably detect these anatomical features through a simple, noninvasive test of auditory brainstem function.

The stapedial reflex is a small change in pressure that results when the stapedius muscle of the inner ear contracts in response to a sound. We measured this reflex in 54 people with autism, aged 4 to 23 years, and 29 neurotypical children, aged 7 to 17 years5.

We found that children with autism have a lower threshold — meaning they respond to a quieter sound — for the stapedial reflex than neurotypical children do3. This finding is consistent with reports that some autistic children are hypersensitive to sounds. We also found that the reflex kicks in later among children with autism than among controls. This result could come from fewer brainstem neurons or alterations to the neuronal branches relaying the information.

We can measure the stapedial reflex in both ears after playing a sound in just one ear; the reflex is usually faster in the ear that receives the sound.

But we found that in many children with autism, the reflex in the opposite ear is faster.

Another research group has studied the responses of the hair cells in the inner ear in autistic people. They similarly found that noninvasive tests can reveal significant differences in auditory function in these people6.

We believe we can use these differences to screen for autism and potentially diagnose the condition before other traits, such as communication problems, appear. To that end, we are evaluating the sensitivity of such a screen in newborns.

We are also using animal models to better understand the biological basis of brainstem abnormalities in autism. Rats exposed to the epilepsy drug valproic acid in the womb, a model of autism, have fewer inhibitory neurons — which dampen brain signaling — in the auditory brainstem than typical rats do7. Those neurons that are present have an abnormal appearance and arrangement. Neurons in the auditory brainstem of the rats exposed to valproic acid have hyperactive responses to loud sounds8.

We plan to examine mice carrying mutations associated with autism to see if auditory impairment is a consistent trait across rodent models. We also plan to examine whether the differences we see in animal models are present in the brains of people with autism.

Randy Kulesza is director of anatomy at Lake Erie College of Osteopathic Medicine in Erie, Pennsylvania.