Zeroing in on illusions in eye-gaze research 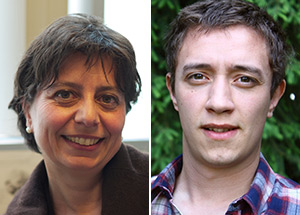 Eye-tracking technology has been a popular way of investigating social behavior related to eye gaze in people with autism over the past ten years. Its ability to noninvasively track their focus of attention during social situations has made it a particularly attractive technique, and one that can be used in individuals of all ages.

However, a number of ideas or concepts that researchers generated from the first studies to use eye tracking have not always been supported by subsequent research.

Our extensive examination of eye-tracking studies in autism, published in April in Neuroscience and Biobehavioral Reviews,gives a comprehensive summary of these studies and asks how difficulties in social attention can be better understood with this technique1. In particular, we tried to update common misconceptions about gaze behavior in autism.

For instance, we found that basic social orienting, which refers to the ability to orient toward others and, notably, toward their faces, may not be as consistently impaired as previously thought. Individuals with autism as young as 6 months do, in fact, look first toward faces.

This may seem somewhat counterintuitive given the way people with autism behave in everyday life, notably their difficulties in establishing eye contact with people they encounter.

But a 2014 study using a head-mounted eye-tracking system, which allows gaze behaviors to be recorded during real social situations, provides some evidence that context plays an important role in social orienting in children with autism. It suggests that although social orienting is clearly altered in these children in response to speech, it may be less so in response to facial expressions — though still reduced compared with typically developing peers.

How long children with autism spend looking at faces is another matter, but it seems that it also depends quite a lot on the type of interaction studied.

Another common belief is that people with autism don’t look enough at others’ eyes and look instead at their mouths, as was first suggested more than ten years ago2. This behavior is again more complex than previously thought, and only one study has been able to reproduce3 that first widely published result, while a dozen others have not found this to be true4, 5, 6.

Finally, it is as important to acquire the most informative data as it is to analyze them in an effective way. Most studies have so far quantified where people with autism might look in particular scenes in a movie clip. Focusing on relevant aspects of the scenes, such as the social interaction between two actors, and ignoring the less relevant ones — for example, a door that closes — is of course necessary in order to understand what is going on. But there is more it, and timing is an important aspect not to be neglected.

In real-life interactions, social cues occur rapidly at specific moments. Therefore, it is important to be able to study gaze behaviors on a moment-to-moment basis. Several studies have proposed a way to accomplish that by measuring eye movements that are time-locked to a specific event or by analyzing the trajectory of gaze over a scene in time and space.

Surely these measures will enable researchers to test new hypotheses regarding the atypical visual social attention encountered in individuals with autism. For instance, do individuals with autism demonstrate atypical visual social attention at only key moments of an interaction? Do their gaze trajectories cluster together or are they widespread over the scene? These, we think, are important questions to answer for improving interventions.

The idea that people with autism don’t look at others’ faces and look too much at their mouths was a simple message, but it is unfortunately not accurate as a general statement. Future studies will have to acknowledge and address issues related to context and use a wider panel of analytic strategies.

Nouchine Hadjikhani is associate professor of radiology at Harvard Medical School. Quentin Guillon is a doctoral student at the University of Toulouse II in France.