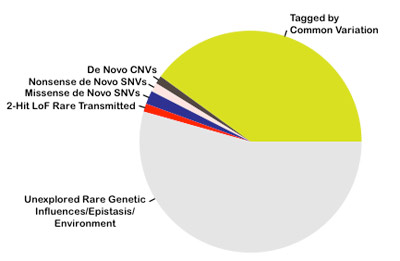 The genetic variations that contribute to autism come in many flavors. Some are rare, found in less than one percent of people, and some are common. Some alter a single letter of DNA, whereas others are made up of deletions or duplications of larger chunks of DNA. Some are inherited from our parents; others arise anew.

In the chart above, originally published in Neuron in January1, we tried to summarize how each of these varieties contributes to autism in the population. Notably, this describes population-level risk and is different than what may be going on in each individual2, 3.

Studies of common, single-letter genetic variations, known as single nucleotide polymorphisms (SNPs), suggest that, individually, these variants play only a minor role in autism risk. To date, no individual SNP has been definitively tied to autism4.

However, an analysis published in October suggests that, taken together, SNPs and variants generally inherited with SNPs explain 40 percent of the variance of autism in families that have a single child with autism, and slightly more in families that have more than one affected child. (This is highlighted in yellow in the chart above.)

As SNP studies grow in size, it is highly likely that researchers will soon identify individual common variants that affect autism risk.

A growing number of studies are searching for rare variants linked to autism risk by sequencing the exomes — the protein-coding portions of the genome — of children with autism and unaffected family members. These studies have found that spontaneous rare variants are more common in people with autism, as are inherited variants that destroy the function of both copies of the gene5-11. 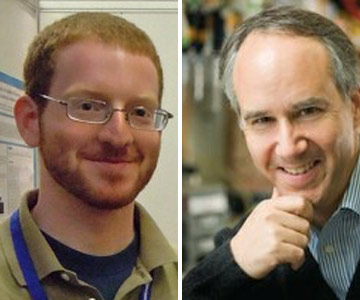 Because the variants are rare, individual variants explain a small portion of the total risk for autism. It appears that this type of variation in aggregate also explains a relatively small proportion of the variance in the population (shown in red, blue, pink and brown). However, this class of mutation is still likely to be important because it reveals biological mechanisms that will be crucial for understanding the disease.

The chart above does not include syndromic forms of autism — those caused by mutations in a single known gene — because this group is typically excluded from large genetic studies. But these mutations are likely to be responsible for about five percent of autism cases.

The remainder of the risk for autism may be explained by a variety of different factors that are as yet unmeasured in large, well-powered studies. For example, exome sequencing covers only a small percentage of the genome. Rare genetic variation in the remaining 97 percent, which is so far unexplored, is likely to have a large contribution.

Interactions among genetic variants and with the environment will also contribute. However, as the number of possible interactions is so large in these studies, it is likely to be difficult to identify significant ones. Finally, though heritability estimates vary widely in autism12-14, there is clearly a strong contribution from environmental factors that are not well studied.

Daniel Geschwind is professor of neurology and psychiatry at the University of California, Los Angeles. Jason Stein is a postdoctoral researcher in Geschwind’s lab.