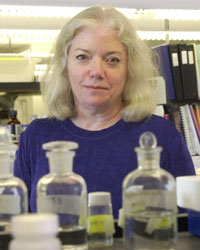 People are living proof of the power of oxytocin. Without the aid of this tiny molecule, we would not exist. Oxytocin helps eject big-brained human babies from the womb and milk from the breast. It regulates feelings that we humans experience as ’love.’ And it can bond mothers, fathers and others to babies, and to each other, laying the foundation for civilization.

In the past few years, there has been a virtual tsunami of research into oxytocin as a potential treatment for autism, thanks to both genetic and behavioral studies. When given acutely — typically as a single treatment — intranasal oxytocin usually improves attention to social stimuli in typical adults. And genetic variations in the oxytocin receptor, which binds to the hormone, have been linked to autism.

But little research has been done on the consequences of oxytocin treatment, especially during development, when human brains are especially vulnerable.

In a study published 15 October in Biological Psychiatry, Karen Bales and her colleagues at the University of California, Davis, attempted to fill this gap in our knowledge. They found that in adolescent prairie voles, a rodent species that normally forms pair bonds, long-term treatment with a low dose of oxytocin disrupts the voles’ preference for a familiar partner — even after the treatment ends.

These findings are consistent with an emerging understanding of the complex nature of oxytocin’s actions. As scientists test oxytocin on people with different disorders, it is becoming clear that individual social histories and differences in the expression of the oxytocin receptor significantly influence how the molecule affects behavior.

These studies expose many deficiencies in our knowledge of oxytocin, which need to be examined before considering it a useful therapeutic. For example, it is difficult to accurately measure levels of oxytocin in the body, so this is rarely done even in research dealing with the effects of oxytocin.

But there is a pressing need to understand oxytocin’s effects. We are already engaged in an unrecognized and unmonitored human experiment using oxytocin. Pitocin, a synthetic form of oxytocin, is widely administered to pregnant women to speed up labor, even though its effects on newborns and mothers remain unexplored. Studies in prairie voles have shown that a single exposure to a large dose of oxytocin — given on the first day of life — can disrupt the capacity to form a pair bond later in life. Whether oxytocin has a similar consequence in humans is not known.

Might oxytocin have age-dependent consequences on the brain? Are there windows of opportunity during which oxytocin has long-lasting effects? Why does the dose matter and why do different doses have different effects?

Clearly, there is much we need to learn about this powerful molecule.