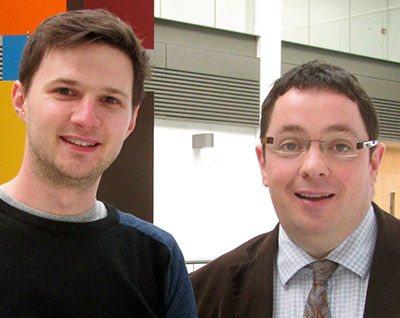 Attempting to understand how environmental factors influence gene expression is one of the most exciting areas in biomedicine today. Scientists often label these effects with the umbrella term ‘epigenetics.’

We can define the phenomena of epigenetics — chemical modifications of DNA or its associated proteins — as dynamic and potentially heritable changes in gene expression that persist even after the signal or event that initiated the change disappears. Increasingly, researchers are focusing on disentangling the molecular mechanisms in the developing and adult brain that underlie epigenetic change.

In a review published in the January issue of Genes, Brain and Behavior, we propose that researchers consider the influence of gut microbiota — the community of bacterial species that inhabit the digestive tract — on epigenetic regulation of brain functions, especially when studying neurodevelopmental disorders such as autism1.

The epigenetic toolkit typically consists of chemical modifications to nuclear proteins called histones, which are individual DNA bases and certain types of noncoding RNA. The fact that environmental factors can reversibly switch these regulators on or off makes them attractive therapeutic targets.

There is mounting evidence of a link between autism and alterations in the diversity and abundance of the gut microbiome2. This comes as no surprise because factors such as prenatal infection and complications around the time of birth — which are associated with altered microbial colonization of the developing infant — have been implicated in autism.

The fact that gastrointestinal distress is common among people with autism further supports this connection3. Mice lacking any gut bacteria show social deficits and repetitive behaviors similar to those observed in people with autism4.

What’s more, a specific strain of probiotic bacteria, given just three times post-weaning, is able to reverse some of the behavioral changes observed in mice exposed to infection in utero5. This finding has further bolstered the concept of an altered microbiota-gut-brain axis in autism.

Epigenetic mechanisms may play a role in the development of autism6, 7, but at the moment it is unclear whether these are related to the composition of gut bacteria. In our new review, we propose that chemicals the gut microbes produce can affect epigenetic regulation within the host’s brain. These alterations could in turn lead to changes in neuronal gene expression, which can eventually alter the host’s behavior.

In support of this hypothesis, previous research has shown that the bacteria in our bodies serve as factories for the production of a whole host of neuroactive compounds, including neurotransmitters and short-chain fatty acids8, 9. Some of these products, such as butyrate, can alter the function of enzymes that modify histone proteins and thereby change gene expression.

The gut microbiota is an important regulator of how genetic and environmental factors converge to alter brain development. Thus, given that autism has both environmental and genetic risk factors associated with it, gut microbes are poised to play a key role in the origin of the disorder.

Because every human has a different genetic makeup but also his or her own individual fingerprint of microbial species, known as the ‘enterotype,’ we expect that there are certain microbes preferentially living in people with certain genetic variants.

Finally — and perhaps most provocatively — we propose to view the microbiota itself as an independent epigenetic entity.

Accordingly, this would mean that the microbiota may contribute to heritable changes in the expression of a person’s phenotype or observable characteristics. We reason that the microbiota can accomplish this by harnessing mechanisms that are similar to those of the classic epigenetic toolkit.

Although this is somewhat speculative, applying these new approaches to research should improve our understanding of the processes contributing to behavioral changes in autism and other neurodevelopmental and psychiatric diseases. As a result, probiotic-based therapies that affect brain function, which we have called ‘psychobiotics,’ may emerge to target such epigenetic mechanisms10.

John F. Cryan is professor of anatomy and neuroscience and principal investigator in the Alimentary Pharmabiotic Centre at University College Cork in Ireland. Roman M. Stilling is a postdoctoral researcher at the center.