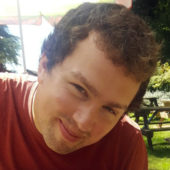 Tom Richardson
Research fellow, University of Bristol
Sign up for Spectrum’s newsletters
Thanks for subscribing!
The Expert:

The genes we inherit from our parents influence our risk of various health conditions and disease. Although some conditions are caused by mutations in a single gene, the risk of having complex ones such as autism and schizophrenia may be determined by hundreds, if not thousands, of genes along with environmental factors.

Typically, individual mutations, or ‘genetic variants,’ confer only a small increase in the chances of having a complex condition. To capture the overall genetic risk for a condition, researchers may calculate an individual’s ‘polygenic risk score.’ The score is the sum of all genetic variants associated with the condition that exist in their DNA.

As sample sizes with genetic data continue to grow, the scientific community is increasingly recognizing the utility of polygenic risk scores. This past year, we calculated scores for 162 different traits and conditions among 334,398 individuals enrolled in the U.K. Biobank study.

We found that these scores can accurately predict the risk of certain conditions. For example, individuals with a high score for ulcerative colitis, a form of inflammatory bowel disease, have more than fivefold the odds of having the condition as those with a low score.

A polygenic risk score based on many genetic variants may be useful not only for predicting overall risk, but also for helping us uncover causal relationships between traits and conditions. For example, individuals with a high polygenic risk score for obesity also tend to have high blood pressure, reflecting the causal relationship that exists between these two traits.

Most genetic variants influencing autism risk are likely still to be discovered, but more data exist for other brain conditions. This includes schizophrenia, which in our study had a polygenic risk score consisting of 1,055 independent variants.

We found that individuals with a high risk score for schizophrenia tend to perform worse on tests of intelligence and short-term memory than do those with lower scores. These findings suggest that a high genetic risk of schizophrenia leads to lower cognitive performance, which is consistent with the observation that people with schizophrenia often show cognitive decline.

We also found associations with behavior. For instance, individuals with a high genetic risk of schizophrenia appear to be more likely to smoke than other people and less likely to succeed in their attempts to stop smoking.

As our understanding of the genetics of autism improves, so should our ability to predict the likelihood that an individual has the condition. Polygenic risk scores are straightforward and inexpensive to calculate: The genetic data needed can be generated these days for less than $50. Scientists could generate this score as early as at birth, after extracting a newborn’s DNA from their cord blood.

This information may help parents look out for signs of autism in their child at an early age. It may also help doctors make accurate diagnoses, or even result in a diagnosis that would otherwise have been missed. Early detection of autism is crucial for improving the lives of people with the condition.

However, polygenic risk scores are not always accurate, and their application within a clinical setting is uncharted territory. There are also ethical issues, such as whether an individual wants to to know her chances of developing a condition, such as Alzheimer’s disease, for which there are no good treatments. There is also some concern that generating scores early in life may open the door to prenatal testing, which brings up ethical issues regarding future decisions based on the results of those tests.

Also, widespread genetic testing in the clinic may exacerbate existing health inequities, as globally not everyone will have access to it. So although polygenic risk scores hold huge potential for ameliorating or preventing health problems, many challenges must be addressed before this potential is realized.

Tom Richardson is research fellow in genetic and epigenetic epidemiology at the MRC Integrative Epidemiology Unit at the University of Bristol in the United Kingdom.