Genes and environment are two-way street in autism risk 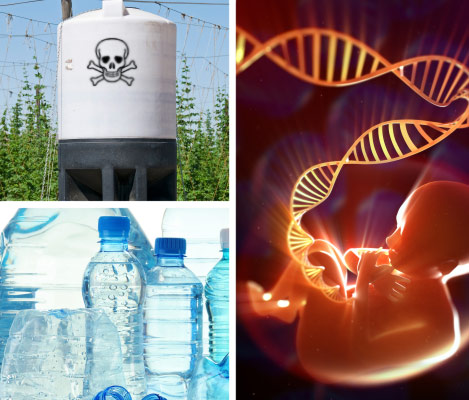 Close contact: Exposure to certain environmental agents, such as chemicals found in plastics, may alter the expression of autism-related genes.

Understanding and treating autism would certainly be much simpler if there were only a single or even a handful of underlying culprits. Instead, autism is clearly falling into the category of complex human genetic disorders that include cancer, cardiovascular disease and autoimmunity. Genes and environmental factors are both involved, but using a genetic or other molecular test to predict an individual’s risk of autism remains frustratingly out of reach.

This is in large part because gene-environment calculations involve more than simple math. It may be tempting to consider genes and the environment as separate paths, but I’d like to point out that the important interactions occur on what is more of a two-way street.

Advances in the technologies used for mapping and sequencing genomes have paved the way for many new insights into the genetics of autism spectrum disorders. Copy number variations (CNVs), which are large deletions or duplications of DNA, are frequently found in people with autism or other neuropsychiatric disorders1. Sequencing exomes, or the coding regions of genes, has revealed new rare mutations2,3,4.

Overall, genetics in autism has transitioned from the study of common inherited variants to the discovery of rare CNVs and mutations that are unique to certain individuals.

The good news is that much has been learned from studies of genetics and gene expression about how neurons and synapses, which transmit signals between neurons, mature in autism5. But despite these successes, there is still not a single genetic test that can predict more than one to two percent of autism cases. Determining whether a given rare variant causes autism is also often difficult to prove.

There is compelling evidence that rare environmental exposures during pregnancy such as infection with German measles or taking drugs such as thalidomide or the epilepsy medication valproate are strong risk factors for autism. These data suggest that pregnancy is a window of susceptibility for autism risk6 in the child.

The reality is that everyone enters the world with his or her own personal and complex mixture of genes and environmental influences, so finding a single smoking gun in the environment is unlikely.

An interesting example of the complex gene-environment interplay is the influence of both nutritional factors and genes on the one-carbon metabolism cycle, a pathway that includes the vitamin folate. This cycle generates important methyl groups — molecules that can epigenetically modify both DNA and histones, the proteins that serve as organizing spools for DNA.

Epidemiology studies show that women who take prenatal vitamins containing folic acid are less likely than those who don’t to go on to have a child with autism. This protective effect is the strongest for women who carry a certain genetic variant in MTHFR, an important enzyme in the one-carbon metabolism cycle15,16.

PBDE’s effect on methylation in the brain is also linked to social deficits in mice that model Rett syndrome18. So genes and the environment can combine to modify DNA methylation, resulting in changes to gene expression and altered behavior.

My team led a study, set to be published later this month in Environmental and Molecular Mutagenesis, that examines the effect of long-term exposure to organic pollutants19.

Instead, we found that levels of the historic pollutant PCB-95 are strongly associated with duplication of the 15q11-13 genomic region (dup15q), a common CNV among people with autism. Interestingly, all of the dup15q brain samples are from individuals born after 1980, although the U.S. banned the use of PCBs in 1976.

Among the samples with PCB-95 exposure, all five cases of 15q duplications are inherited from the mother, raising the possibility that maternal PCB-95 exposure may have predisposed the 15q11-13 region to rearrangement. PCBs are not known mutagens, but there is less DNA methylation in the dup15q brain samples than in controls, suggesting that hypomethylation could lead to instability of this region.

This study certainly raises more questions than it answers about the two-way interaction of genes and environment in autism risk. How do the rare new CNVs and mutations observed in autism arise? Could some of these genetic changes be a result of exposure to environmental toxins? How important are DNA methylation levels in genetic stability?

We may need to look back as far as a generation or two in epidemiology studies of gene-environmental interaction to get concrete answers to these questions. Animal and cell culture models of these interactions may help reveal the molecular and genomic mechanisms involved.

Janine LaSalle is professor of medical microbiology and immunology at the University of California, Davis.