Exploring sleep in children with autism 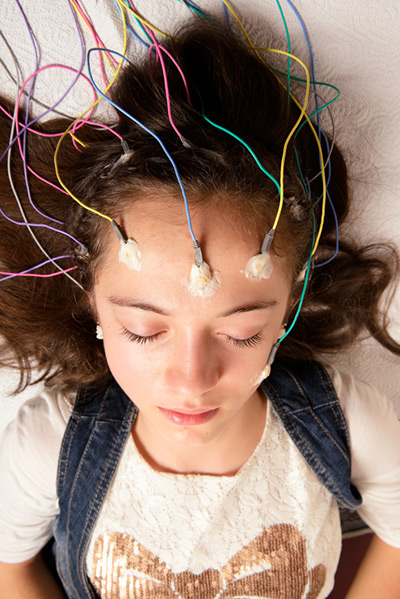 Sleep is central to our well-being, yet we frequently overlook its role in many conditions. In adults, sleep deprivation leads to significant problems with mood, cognition and motor skills. In typically developing children, inadequate or disrupted sleep may lead to hyperactivity, irritability, health problems and impaired school performance.

One of the most consistent complaints of parents of children with autism is that their children have significantly disrupted sleep. And increasing evidence suggests that children with the disorder have a much higher prevalence of sleep problems than typically developing children do1. These sleep disturbances may exacerbate autism symptoms, such as cognitive and social deficits.

Having a better understanding of sleep in children with autism may help reveal the mechanisms underlying the disorder, and point to potential treatments that can improve their quality of life.

‘Sleep architecture’ tells us about the different stages of sleep that an individual experiences throughout the night. Researchers have proposed that different sleep architecture patterns are biomarkers for certain disorders. For example, studies suggest that children with autism have less rapid eye movement (REM) sleep than do controls2.

REM sleep may be involved in neuronal development and cognitive function. As yet, we do not know if reduced REM sleep is specific to autism, or if it merely worsens the core symptoms.

Another complexity in studying the role of sleep in autism is that any observed sleep disturbance may be a manifestation of an underlying, treatable sleep disorder, such as insomnia or sleep apnea — interrupted breathing during sleep that decreases blood oxygen levels.As yet, it is unclear what the frequency of these disturbances is in children with autism.

When clinicians ask parents about their affected child’s sleep, the most frequently reported disturbance is insomnia, which includes difficulty in falling and staying asleep, as well as waking early3. Sleep monitoring studies have confirmed these reports, showing that children with autism take longer to fall asleep, are awake for longer in the middle of the night, and sleep for shorter periods than typically developing children do.

Research shows that children with autism may also have altered circadian rhythms, based on findings that more than half (about 65 percent) of them are deficient in melatonin, a hormone that regulates our sleep-wake cycle.

As a 2012 clinical trial indicates, melatonin supplements may provide some benefit for children with autism4. However, sleep disorders can have multiple causes, and may not be attributable solely to a melatonin deficiency.

For example, restless legs syndrome, a condition in which the individual has frequent movements while sleeping, has been associated with iron deficiency. This condition can disrupt sleep and cause daytime symptoms such as hyperactivity. Iron supplementation improves sleep in those who have this condition.

Sleep apnea is also unrelated to melatonin. It is found in 3 to 20 percent of typically developing children, and is characterized by a partial or complete closing of the airway. This may cause blood oxygen levels to plummet. Sleep apnea episodes typically waken the child, causing significant disruption to their sleep.

In typically developing children, sleep apnea has been associated with hyperactivity, poor attention and poor performance in school. This issue has not yet been addressed in children with autism, although sleep apnea could significantly worsen their core behavioral and cognitive symptoms.

To better understand how these conditions relate to autism, researchers need to characterize the prevalence of sleep disorders in children with autism, and also examine their impact on the core symptoms of the disorder.

However, studying sleep in children can be difficult because of their unique characteristics. For example, even many typically developing children have difficulty describing how long it takes them to fall asleep, or whether they experience restless legs. Children with autism often have impaired verbal skills, which further limits their ability to communicate sleep problems.

Children with autism may also be exquisitely sensitive to tactile sensations and unable to tolerate the sleep-monitoring equipment that is necessary to identify many sleep disorders and to reveal sleep architecture.

To address these challenges, our laboratory has developed specific ways to analyze sleep in children with autism.

We have been striving to better characterize the sleep of children with autism, using both parent reports and overnight measures of brain activity, called polysomnography. This method includes electroencephalography measures of brain waves, measures of eye movements, muscle activity, heart function and breathing. It involves a lot of wires and connections.

We first show children pictures of the equipment on another child.  We then gradually introduce the children to the equipment over the course of a week or more, so that they can discover, explore and familiarize themselves with the testing materials before the testing phase.

Understanding the nature of sleep, and of sleep disorders, in children with autism may provide us with valuable biomarkers of this disorder, and even help illuminate its etiology. We may also be able to provide treatable targets for improving sleep, and in so doing improve the children’s functioning and quality of life.

Ruth O’Hara is associate professor of psychiatry and behavioral science at Stanford University in California. Michelle Primeau is a doctor specializing in sleep disorders and a postdoctoral associate in O’Hara’s laboratory.