Dysmorphology as biomarker for the study of autism 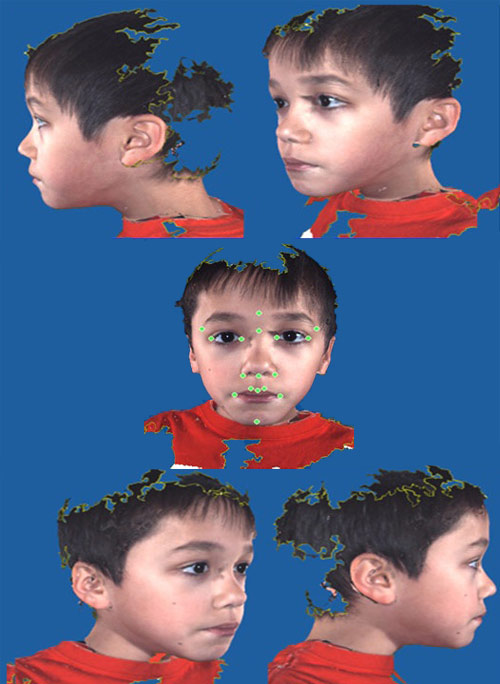 Facial identity: Unusual physical features, such as wide-set eyes, are more common in children with autism than in controls.

Facial identity: Unusual physical features, such as wide-set eyes, are more common in children with autism than in controls.

Diagnosed on the basis of a broad spectrum of behavior, autism has many different causes. To sort out these causes, researchers aim to identify subgroups within the autism spectrum that appear etiologically discrete. Subgroup development starts with the identification of phenotypic features that occur consistently in autism populations, are relatively discrete and easily measured, and, most importantly, suggest an underlying etiology. We consider the term phenotypes comparable to biomarkers and endophenotypes.

In the 1970s and early 1980s, a number of studies documented that, taken as a group, children with autism have physical features outside the norm. For instance, researchers found that children with autism averaged 5.8 minor physical anomalies, which is significantly higher than the control group score of 3.51. They concluded that finding physical anomalies verifies the biological origin of autism.

Unfortunately, full appreciation of the early studies was hindered by the prevailing dogma that autism is homogeneous. There was no consideration of the idea that there could be etiologically distinct groups within the autism diagnosis, with some characterized by physical anomalies and some not.

In 2000, we hypothesized that physical dysmorphology — for example, the presence of a significant number of physical anomalies — is a useful phenotypic feature that could allow us to divide autism into meaningful subgroups2. The premise is that individuals for whom there is evidence of an insult to early morphogenesis would have developed their autism on a different basis than individuals for whom morphogenesis proceeded normally.

We called the subgroup with evidence of abnormal morphogenesis ‘complex neurodevelopmental autism,’ or complex autism, and the remainder, essential autism. Complex autism is defined by generalized dysmorphology or microcephaly (small head size) and is identified in about 20 percent of children diagnosed with autism.

As a group, children with complex autism have different functional and outcome measures, neurologic symptoms and heritability profiles than those with essential autism.

Though features such as early language deficits and low IQ scores correlate with poor outcomes, the complex designation is the most sensitive test, predicting a poor outcome with 86 percent accuracy. In one study, having multiple dysmorphic physical features predicted poor improvement following a year of intensive behavioral therapy4. For the children who were non-verbal at the beginning of the therapy, the presence or absence of dysmorphic features was 90 percent predictive of whether they acquired language.

Compared with those who have complex autism, individuals in the essential autism subgroup are twice as likely to be male (6.5:1 versus 3.2:1) and more than twice as likely to have a family history of autism (20 percent versus 9 percent). They have higher sibling recurrence risks of four to six percent compared with no recurrences in 46 families of children with complex autism. Subtle autism traits are also noted twice as often in siblings of children with essential autism compared with siblings in complex autism families (12 percent versus 6 percent). These differences in heritability markers indicate that the complex and essential subgroups are etiologically distinct.

There are a number of practical consequences of separating complex from essential autism. In the research arena, the major consequences come from analyzing data from the essential and complex autism subgroups independently.

Analyses of essential autism have allowed us to make a number of significant observations. First, a regressive onset — characterized by a loss of language or social connections — and macrocephaly (enlarged head size) both emerged as strong predictors of poor outcomes, with a positive predictive value of 84 percent.

Studies of gender effects within essential autism show that girls consistently perform better on cognitive, adaptive and autism diagnostic measures than boys do. What’s more, because essential autism is the more heritable subgroup, removing participants with complex autism from analyses should improve the power of linkage and sibling pair analyses.

A clinically practical consequence of the separation is that almost all the autism-associated syndromes, including chromosome disorders, single-gene disorders such as fragile X syndrome and developmental disorders are diagnosed in children with complex autism.

To guide non-geneticists through a dysmorphology assessment, researchers have developed an Autism Dysmorphology Measure. This measure has proven reliable for use by non-geneticist physicians following minimal training, and is available with training materials5.

Researchers assess 12 body areas — height, hair patterns, ears, nose, face, philtrum (space between the nose and mouth), mouth or lips, teeth, hands, fingers or thumbs, nails and feet — in children with autism and their parents and score the features using a short algorithm. Although it is not designed to replace an evaluation by the medical geneticist, the measure is useful in autism clinics and in research settings to separate complex from essential autism.

The distinction between complex and essential autism represents the first pass at dissecting the etiologic heterogeneity within the autism diagnosis. Although each subgroup remains heterogeneous, the functional and genetic differences indicate that essential and complex autism are inherently different with distinct etiologies6.

By removing individuals with complex autism from consideration, we have been able to more accurately assess additional phenotypes and biomarkers, including facial phenotypes, pupillary light reflex parameters, regression, macrocephaly, recurrence risks and family loading for autism and related disorders.

Judith Miles is professor of genetics, pediatrics and pathology at the Thompson Center for Autism and Neurodevelopmental Disorders at the University of Missouri.