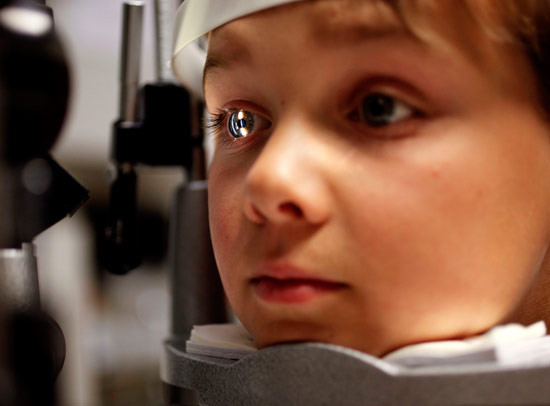 Signaling success: Dynamic changes in pupil size are often abnormal in people with fragile X syndrome, and can be used to assess the effectiveness of therapies.

A number of targeted trials on drugs that have the potential to reverse many of the behavioral and cognitive features of fragile X syndrome, are under way. Human and animal studies have shown that these medications can reverse many of the neurobiological and phenotypic features of fragile X syndrome. Along with these new trials, we will need accurate endpoints that can reliably measure the drugs’ effectiveness.

Fragile X syndrome is the most common inherited cause of intellectual disability and single-gene cause of autism. The full mutation has more than 200 repeats of a DNA sequence — CGG — at the front end of the FMR1 gene. This repeat number leads to a shutdown of the gene and a lack of the protein that it normally produces, fragile X mental retardation protein, or FMRP. The lack of FMRP causes fragile X syndrome and intellectual disability, in addition to autism, in 30 percent of individuals and pervasive developmental disorder-not otherwise specified in another 30 percent.

Between 55 and 200 repeats in the FMR1 gene causes what is called a premutation. The premutation leads to autism at a much lower rate — approximately ten percent of boys and less than two percent of girls.

The fragile X mutations cause autism through different molecular pathways. The absence or deficiency of FMRP affects the levels of many genes important for synaptic plasticity — how neurons strengthen important connections — and the outgrowth of neurites, the formation of new connections between neurons.

The fragile X premutation leads to higher levels of the RNA message for the FMR1 gene, which can bind to important proteins and dysregulate neuronal functions, leading to early cell death.

Novartis and Roche both have an inhibitor of mGluR5, which inactivates a pathway that is overactive in those with fragile X syndrome.

Seaside Therapeutics has completed a multicenter controlled trial of arbaclofen — an activator of GABA-B, which indirectly targets mGluR5 — in children and adults with fragile X syndrome. The company presented the preliminary results in May 2010 at the International Meeting for Autism Research and in July 2010 at the National Fragile X Foundation International Conference. Of 63 individuals with fragile X syndrome, those with the most severe social deficits or with the most severe irritability had the best response — with significant outcomes compared with placebo on the Clinical Global Impression (CGI) and other measures.

We are conducting a controlled trial of minocycline, an antibiotic approved by the U.S. Food and Drug Administration. The trial is taking place at the University of California, Davis’ Medical Investigation of Neurodevelopmental Disorders (MIND) Institute, in children between the ages of 3 and a half to 16, and is funded by the National Fragile X Foundation1.

The outcome measures used for the studies include standard measures such as the CGI and behavior checklists such as the Aberrant Behavior Checklist. We are also using new measures to document improvements in the central nervous system that are each abnormal in fragile X syndrome: event-related potentials (ERPs), which measure coordinated fluctuations in neuronal activity, eye tracking, and pupillometry — measurements of pupil diameter.

Other preliminary studies of a single dose of fenobam — the first mGluR5 inhibitor studied — in 12 adults with fragile X syndrome have shown improvement on prepulse inhibition, which is whether a person acclimatizes to a startling sound2. We are looking forward to assessing whether the pupillometry and eye-tracking abnormalities also improve with targeted treatments3.

We have also shown that there are abnormalities in how infants with fragile X syndrome process vision. We plan to study these deficits in our targeted treatment trials at the MIND Institute4.

We are still validating these measures, but they look promising, so we predict that they will be excellent outcome measures for assessing improvement in brain function. The use of imaging measures to detect the brain’s response to different stimuli should also be helpful in these studies, and we are developing measures to be used in medication trials5.

It is likely that many non-fragile X subgroups of children with autism will have similar neurochemical abnormalities to those with fragile X syndrome, including an increase in mGluR5 signaling, decrease in GABA-A receptor signaling — the central component of another pathway altered in fragile X syndrome — and perhaps elevations in matrix metalloproteinase 9 (MMP9), the target of the minocycline trials.

A study published last year shows lower levels of FMRP in the brains of individuals who have bipolar disorder, severe depression, schizophrenia or autism without a fragile X mutation6. These studies must be validated, but they suggest broad overlap between individuals with fragile X syndrome and those with other mental health disorders, including autism.

The new outcome measures we are developing should also be helpful in studies of children and adults with autism. We look forward to expanding out treatment protocols to children with fragile X mutations as well as those with non-fragile X autism.

Randi Hagerman is medical director of the MIND Institute at the University of California, Davis.