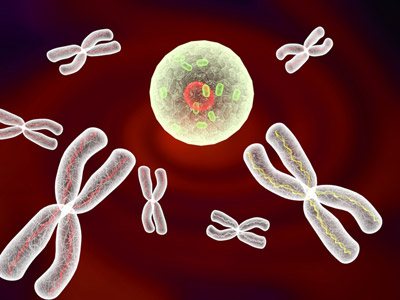 Studies in the past few yearshave established an important role for rare copy number variations (CNVs), duplications or deletions of DNA regions, in the etiology of autism and schizophrenia. It would appear that there is a substantial overlap in CNV risk regions, or loci, between the two disorders1, 2.

This observation raises the following question: How can mutations in the same loci lead to different clinical features?

The answer to this question may provide important new insights and have direct implications for etiology, diagnosis and therapy for both disorders. CNVs may overlap between the two disorders, but the actual variants associated with each of them — such as deletion versus duplication of the same region — are mostly different2.

One of the most prominent CNVs, in the 22q11.2 chromosomal region, is under intense scrutiny by our group and others, and is linked to both schizophrenia and autism.

Reciprocal duplication of 22q11.2 is increasingly linked to autism. For example, a number of genome-wide assessments for CNVs in autism found more duplications of the region in people with autism than in controls. Duplication is present in about 0.5 to 1 percent of people with autism, which is comparable to some of the most prevalent autism-linked CNVs, such as 16p11.2 and 15q114.

For some CNVs, not only does the CNV locus overlap between the two disorders, but the variant is also the same. This does not appear to be the case for the 22q11.2 locus.

Few, if any, cases of schizophrenia have been reported among individuals with a duplication of 22q11.2, and there is no statistical evidence for it being a schizophrenia risk factor. In contrast, up to 20 percent of children with the reciprocal deletion are reported to have autism5, 6, 7, 8.

These findings strike me as surprising because my lab followed the progress of a group of children with 22q11.2 deletion in the 1990s and found no cases of autism9.

It may be that, unlike duplication of 22q11.2, deletion of the region is a risk factor for both disorders. That would account for shared phenotypes between autism and schizophrenia, mainly deficits in social development and language.

On the other hand, there is a large body of clinical research that clearly differentiates autism from schizophrenia at several levels, including symptomatology, age at onset and developmental trajectory10. In fact, presence of autism is an exclusion criterion for schizophrenia, according to the Diagnostic and Statistical Manual of Mental Disorders-IV.

It is possible that in some cases, shared CNV risk factors underlie the few shared phenotypes of autism and schizophrenia. But another possibility, which is unfortunately not widely discussed in the literature, is that the clinical overlap may reflect false diagnoses of autism in relatively severe childhood premorbidity to schizophrenia3, 10, 11.

There is variability in the clinical and cognitive symptoms seen, across developmental stages, in individuals who have a deletion of 22q11.2. Followed over time, people with the deletion have symptoms consistent with attention deficit hyperactivity disorder (ADHD) and anxiety disorders (most commonly in the form of specific phobias) during childhood.

During adolescence or early adulthood, however, it is unequivocally established that 25 to 30 percent of individuals carrying a deletion of the region will develop schizophrenia. Their symptoms are indistinguishable from those who have the idiopathic form of the disease, both in clinical manifestations and in neurocognitive and neuroanatomical features.

Researchers agree on the rates of early childhood psychiatric manifestations (ADHD and anxiety disorders) in individuals with 22q11.2 deletion, as well as the later stable diagnosis of schizophrenia. However, they do not agree on the rates at which they diagnose autism in those with the deletion.

Earlier studies did not diagnose autism in individuals with 22q11.2 deletion, whereas some current studies do.

The broadening of the diagnostic criteria for autism and its commonplace application in the field may have affected some studies. The presence of language delay and social deficits in children with 22q11.2 deletion might be labeled as autism under these broad criteria, but I remain skeptical that this is related to the core autism diagnosis and involves common biological mechanisms.

As mentioned earlier, the clinicians who evaluated my laboratory’s group of 58 children with 22q11.2 deletion did not diagnose autism in any of the cases. They found all other childhood psychiatric diagnoses, commonly described across all individuals with this deletion,at similar rates. These clinicians have experience diagnosing autism, having served in relevant clinical centers.

Similarly, no autism cases were reported across the lifespan in the largest study of lifetime psychiatric diagnoses in people with 22q11.2 deletion to date, which looked at 172 people, aged 5 to 54 years12. ADHD and anxiety disorders were the most common diagnoses during childhood, with psychotic disorders increasing dramatically during adolescence and young adulthood. Psychiatric diagnoses other than psychosis with 22q11.2 deletion may be the result of nonspecific expressions of factors that affect brain development and function3.

The most specific neuropsychiatric phenotype associated with 22q11.2 deletion is schizophrenia, as this is the most stable diagnosis that these individuals carry for the rest of their lives. It is also the only psychiatric condition found at a much higher frequency among 22q11.2 microdeletion carriers than inindividuals who have other neurogenetic and developmental disorders associated with intellectual disability3, 12.

This offers researchers the opportunity to elucidate the biological processes affected by such reciprocal imbalances and to contribute novel insights into the pathogenesis of these devastating disorders13, 14.

Indeed, careful studies of mouse models of both duplication and deletion of 22q11.2, as well as studies in people across their lifespans, will be invaluable for deciphering underlying disease processes, circuits and constructs. It will be feasible and useful to extrapolate the lessons learned from the 22q11.2 locus to other disease-predisposing CNVs.

Maria Karayiorgou is professor of psychiatry at Columbia University in New York.