A case for the importance of interneurons in autism 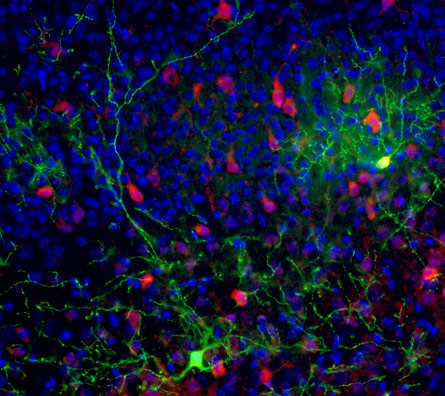 Critical equilibrium: An imbalance between neurons that dampen signals in the brain (green) and those that activate signals could underlie autism.

Critical equilibrium: An imbalance between neurons that dampen signals in the brain (green) and those that activate signals could underlie autism.

Despite the diversity and the rising prevalence of diagnosed cases of autism, the etiology of the disorder remains an open question. Efforts to understand the pathophysiology of autism have focused on genetic factors. Given the high concurrence of autism in identical twins, the genetic origin of autism is irrefutable.

However, despite the appeal of a unifying hypothesis to explain autism, it seems unlikely to exist at the genetic level. Several research groups have developed mouse models to study the effects of mutations in specific genes, such as MeCP2 deletions that lead to Rett syndrome. However, the vast majority of individuals who have autism probably have mutations in multiple genes.

Perhaps the etiology of autism can be better understood as an impairment of specific neuronal circuits. Malfunctions in interneurons in the cortex, which dampen signals in the brain and express the chemical messenger gamma-aminobutyric acid (GABA), may cause symptoms similar to those found in individuals with autism, studies have found.

Michael Merzenich and John Rubenstein first proposed a role for interneurons in autism in 2003, and noted that a high percentage of individuals with autism exhibit seizures and abnormal electroencephalographic (EEG) activity1. These observations suggest that the normal balance between excitation and inhibition is disrupted in the brains of these individuals.

Over the past five years, two additional lines of evidence have come to light that support this hypothesis. The first has emerged from genome-wide analyses of the genes expressed by cortical interneurons. The advent of genetic tools for labeling and isolating large populations of cortical interneurons has allowed a number of groups, including our own, to survey gene expression within these populations.

Interestingly, a number of genes associated with a variety of psychiatric disorders, including autism, are enriched in developing interneurons2,3,4. By contrast, pyramidal neurons, the major neuron population in the cortex thatdirectly processes excitatory signaling, do not seem to show a similar enrichment. However, studies have not explored in detail the role of these autism-associated genes for the proper functioning of GABAergic circuits.

The subtypes of cortical interneurons range from tens to hundreds, depending on the classification scheme. However, these subtypes can be divided into two groups based on their site of origin. Both groups are within the ganglionic eminence, a transitional brain structure present during prenatal and fetal development.

Fast-spiking basket and chandelier cells, as well as Martinotti interneurons that target dendrites — the signal-receiving ends of neurons — are derived from the medial ganglionic eminence. The other major classes, such as bipolar, neurogliaform and multipolar neurons, are derived from the caudal ganglionic eminence. Together these two structures account for more than 95 percent of all cortical interneurons.

The fact that this diversity can be traced back to fairly focal areas of origin has proved useful as a means for understanding the genetic origins of specific interneuron subtypes. It has also allowed researchers to target them directly using genetic tools.

Although it remains unclear how autism symptoms would manifest in model systems such as mice, recent genetic analysis appears promising. Several mouse models in which candidate genes have been manipulated in GABAergic subtypes exhibit EEG abnormalities, seizures and movement disorders5. This suggests that as these manipulations become more refined, they will provide valuable models of autism.

Another lesson learned from these analyses is that gene expression within GABAergic populations is influenced by environment. Our unpublished results show that neonatal neuronal activity affects the maturation of GABAergic circuits containing caudal ganglionic subtypes. Other studies have also shown that experience-driven activity regulates the maturation of basket cells, which mediate neuronal plasticity during a critical period6,7,8,9.

Taken together, it seems that normal brain development is critically dependent on GABAergic interneurons and that either genetic or environmental insults to these neurons could lead to autism. Understanding how both genetics and the environment regulate the maturation of cortical interneurons will hopefully facilitate the design of therapeutic strategies.

Gordon Fishell is professor in New York University’s Neuroscience Institute and affiliated with the departments of cell biology and neural science at the NYU Langone Medical Center.