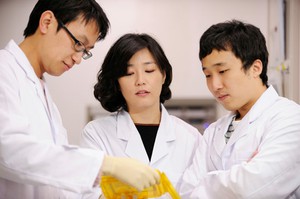 Things are getting better for women in science, but we are still far from a world in which gender is irrelevant. Women scientists may have to work harder than their male colleagues, but for future generations, this is time and effort well spent.

A decade ago, there was obvious discrimination against women in science, with very few women in top faculty positions. In a now-famous 1999 report, the Massachusetts Institute of Technology was the first to publicly acknowledge that women faculty there felt marginalized and that the low proportion of women faculty in the institute’s department of sciences — eight percent — had not increased in 20 years.

That number has more than doubled — to 19 percent — but is still a far cry from equal.

There are many people out there who may question women’s ability to succeed in science, but gone are the days when they can say this out loud and get away with it. A prime example of this came in 2005, when Larry Summers, then president of Harvard University, was roundly criticized for implying that women are less skilled at math and science. The incident is routinely suggested as the reason for the end of his tenure at Harvard.

But encouraging women in science may not be without its downside. A New York Times article published last month quotes several top women scientists — including autism researcher and zebrafish guru Hazel Sive — who are concerned that affirmative action-type programs give the impression that women are not held to the same standards as their male colleagues are.

Another article published this month describes male students at Yale University chanting, “No means yes!” across the campus, a disturbing illustration that gender discrimination is alive and well.

While I was an active part of the scientific community — through science fairs, undergraduate laboratories and a Ph.D. — my gender never felt relevant. (One memorable exception: As the sole woman in a lab of eight people, I had to point out that the freezer rack had become too heavy for me to lift.)

But what I haven’t experienced is the gap that I believe is the hardest to bridge: convincing a panel of mostly male tenured faculty that you are no longer just a young, ambitious postdoctoral fellow, that you are ready to become a professor. I have heard female candidates for entry-level professor positions referred to as ‘girls’ by male and female faculty, postdocs and graduate students alike.

Partly, this continues to be a problem because at the faculty level, women are still very much the minority. Women don’t look like professors when they present at job talks because most of the professors we see are still men.

The few women who do make it must take on the additional responsibility of being role models, whether they want to or not. Although the women scientists who came before us paved the way, their work isn’t quite done yet.