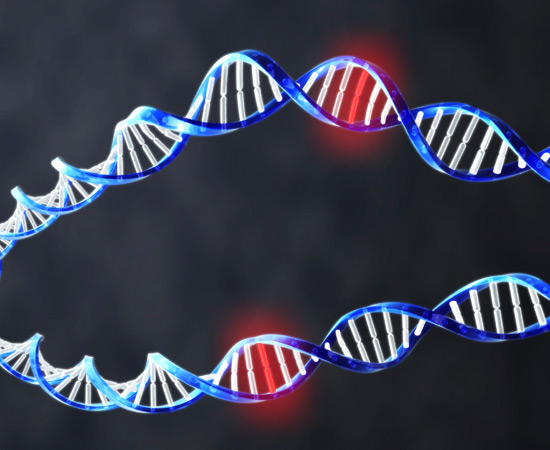 Over the past couple of years, study after study has found specific DNA deletions and duplications, called copy number variations (CNVs), that independently increase an individual’s risk of autism.

But what if you carry more than one CNV?

A study published online 14 February in Nature Genetics is among the first to focus on the combined risk of having multiple CNVs for psychiatric disease.

Screening more than 20,000 children with intellectual disability, Evan Eichler and an international group of colleagues found a deletion on chromosomal region 16p12.1 in 42 individuals, or about 0.2 percent — about four times the frequency they saw in the healthy control population.

In addition to developmental delay, children who carry the 16p12.1 deletion may also have congenital heart defects, seizures and severe growth abnormalities, the researchers found. The deletion joins three others on the short arm of chromosome 16 that are associated with autism or other neurodevelopmental disorders.

For instance, the paper describes a 2-year-old with both the 16p12.1 deletion and another deletion on chromosome 22. The child has a small head, brain fiber abnormalities and no autism-like features. That’s a remarkably different description than the large head size, undersized jaw, low muscle tone and autism that typically characterize this chromosome 22 deletion on its own.

Another provocative finding: The 16p12.1 deletion is almost always inherited (and usually from the mother), rather than arising spontaneously. From the few clinical descriptions the researchers could collect, they found that most of the carrier parents have some kind of developmental delay or depression, but three are normal. In children with two CNV hits, the second CNV is also mostly inherited, from the parent who does not carry the 16p12.1 deletion.

This paper starts to piece apart why a disease-associated genetic variant may crop up in so many different clinical disorders, and even in healthy people. A CNV may have to interact with another CNV or other environmental factors at specific points of development in order to ultimately produce a complex condition such as autism.